IntroductionBuilding should be constructed to with stand natural disasters like earthquakes; landslides; cyclones and floods because building collapse during these disasters cause the maximum damage to people and property.Earthquakes
Buildings should be made strong enough to withstand the shaking of the ground.

LandslidesLandslides cause damage to houses built on mountain slopes. Soil reinforcement using geo-synthetic materials is necessary to safe guard building during a landslide. Fig: Landslide in Western AustriaCycloneBuildings in cyclone prone areas should be built to withstand the onslaught of the wind force. FloodsElevated houses are the best solutions in flood prone areas. Earthquakes and Safe Construction Practices The most successful way to minimize loss to life and property during earthquakes is to build disaster resistant buildings.During an earthquake the ground shakes back and forth due to the plate movement under ground. The surface of the earth ruptures causing huge cracks; landslides occur; and sometimes tsunamis are generated during earthquakes. All these cause severe damage to building. Collapse of buildings lead to loss of life.The Effects of Earthquake on Buildings
The vibrations of the earth during an earthquake make the building on the earth’s surface to move. These vibrations cause the collapse of the building if the foundation is not strong enough.Building collapse is the major cause for loss of life during an earthquake. So, to overcome this we have to build buildings that can withstand earthquakes.Features for Earthquake Resistant Buildings• Building should have a rectangular plan• Reinforced concrete columns should support long walls• Large buildings should be fragmented into small rectangular blocks• The foundation of the building should be strong. Building constructors should ensure that there is no movement of underground soil once the building is built• Doors and windows should be small and centrally located. This will ensure more stability to the walls• Reinforces concrete bands are essential for all buildings. These bands have to be at the plinth level; floor level; lintel level; and roof level• Vertical reinforcement should be provided at the corners and wall junctions 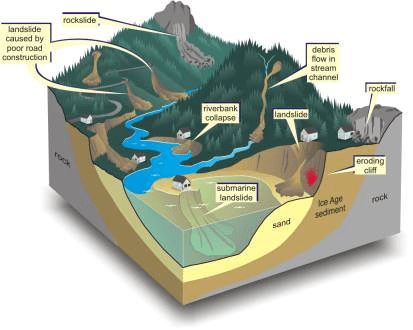 Landslides occur due to heavy rainfall, steep slopes, seismic activity and poor drainage.Landslides are also caused due to deforestation and soil erosions. Unrestricted excavation, mining and quarrying also cause landslides.The site most suited to build houses in landslide prone areas are where the land has not moved in the past. Flat surfaces away from sudden slopes and areas at the top or along the ridges are also suited for building houses.Houses that are most affected by landslides are the ones that are constructed in the existing landslide areas. House that are built on the steep mountain slopes, near the valley or on the foot hills of the mountains are also most affected during a landslide.Warning signs before a landslide• Landslides usually occur in the same place again and again• Doors and windows jam for the first time• New cracks appear on the walls and floors• Gaps form between the pavement and the building outside the house• Fences and compound walls tend to tilt• Underground water and electricity lines breakWhen these warning signs occur people have to take precautions.To prevent damage to life and property sound construction techniques have to be followed. Seasonal inspection and regular maintenance of the drainage system by the authorities is essential.A Safe Drainage System can prevent Landslides to a Large Extent.
Surface drainage system should be kept away from steep slopes, loose soil and non-vegetated land.Water that drains from the roof and other areas like the portico should not be allowed to flow down the slopes. This water should be drained through the drain pipes. Fig: Drainage System on the Slopes

Trees and other vegetation prevent landslides to a large extent Straw, woodchips or bark applied to a depth of one inch is effective in holding the soil from sliding.  Barriers can be erected to avoid minor landslides. Fig: Wall to Stop Landslides in HubeiFloods and its Consequences
Floods occur when soil and vegetation cannot absorb all the water; water then runs off the land in quantities that cannot be carried in stream channels or retained in natural ponds or dams. This excess water causes flooding of plains.Floods also occur naturally on many rivers, forming an area known as the flood plain. These river floods often result from heavy rain, sometimes combined with melting snow, which causes the rivers to overflow their banks. 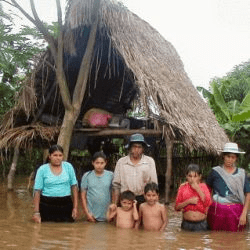 Buildings are most affected by floods. Buildings constructed with mud and bricks get damaged easily. Thatched huts and small houses with tinned roofs also get damaged during floods.People who occupy the flood plains of rivers are most affected by floodsAs mentioned earlier, buildings are affected badly by floods.• Small houses and huts get washed away in flood waters. These houses are totally destroyed in the flood waters.• Houses which do not have a firm foundation get washed away or tend to float.• Houses in low lying areas get inundated with water. There is great loss to property in this case.• Flood waters can damage the foundation and walls of buildings and this will make the construction weak.• Houses may get affected due to floating debris, like huge trees.Damage to houses during flood has to be minimised. The first and foremost thing to be done is prevent inundation of flood waters.People should avoid building houses on river banks or near the sea coast. Houses should be built at least 250 meters away from the river banks. The government should ensure proper drainage system.Buildings should be built on an elevated platform. Buildings in flood prone areas can be built on stilts or columns. Fig: During a cyclone Fig: Satellite image of a cycloneLike in floods, buildings are most affected during cyclonesThe buildings that are most vulnerable to damage during a cyclone are small buildings, huts and lightweight structures.People living on low islands and low-lying coastal areas are most affected during a cyclone. The speed of the wind is maximum when it crosses the coastline.Effect of a cyclone on buildings• Uprooted trees may fall on buildings and cause damage• Roofs and lintels may get damaged due to the force of the wind• Windows, parapets, fences and compound walls can get damaged if they are not firmly fixedCyclones can affect us in other ways also. Electricity cables and transmission towers can be damaged causing immense hardship to people. Live electricity wire on the road can prove to be a death trap to people walking on the road. Sign posts on the roads can be damaged. Fig: The Aftermath of a CycloneProtection Measure for Damage to Buildings• One should select an appropriate site to build a house in cyclone prone areas. A site that is above the inundation level will be suitable.• The shape of an individual building should be either circular or polygonal. Rectangular or square shapes are not suited. A symmetrical building with a compact plan is most suited to withstand cyclones.• As cyclones are accompanied by torrential rain inundation is inevitable. So houses should be elevated. Houses should be constructed on stilts or columns.• Doors and windows should have strong closing and locking systems to with stand the force of the wind. Openings just below the roof should be avoided.• Glass panelling can be avoided in buildings situated in cyclone prone areas. If there are glass panels they have to be protected with paper strips or metallic mesh pasted outside The size of the panels can be small so the damage is minimum.• The roof is the most vulnerable part of the building during a cyclone as it is at a higher level and exposed to the wind. Roof projections should be minimal. A pyramidal roof is most suited in cyclone prone areas. Fig: House with a pyramidal roof

The damage to life and property during cyclones can be minimised having a shelter belt plantation across the wind direction in coastal areas. 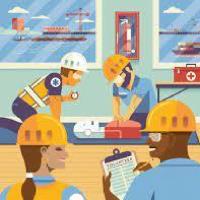