The document Chapter Notes 1 - Chapter 11: Transportation in Animals and Plants, Class 7, Science | EduRev Notes is a part of the Class 7 Course Science Class 7.
All you need of Class 7 at this link: Class 7

All livings beings need food, water and oxygen for survival and to perform various activities. Food gets digested in the food canal or in the alimentary canal. The nutrients are transported from there to other parts of the body in the form of glucose, amino acids, fats, etc. This function is performed by the circulatory system. Unwanted harmful substances and excess water in the body cells are removed by the excretory system. 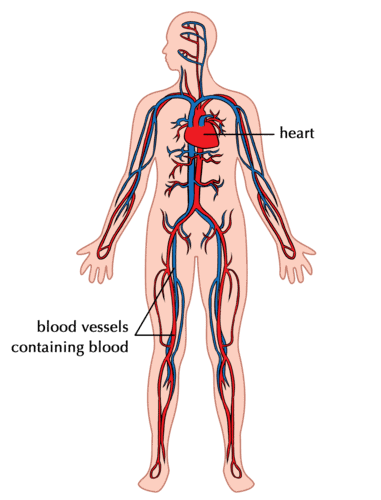 It helps transport food, water and oxygen to all parts of the body. It also helps transport harmful and unwanted waste to the excretory organs. The fluid part of blood is plasma.Blood consists of red blood cells, white blood cells and platelets. Each of these cells performs a specific function.

These cells perform a specific function. Red blood cells, also called RBCs, have iron pigments known as haemoglobin that combines with oxygen and transports it to all parts of the body. The presence of haemoglobin gives red colour to blood. On an average, there are five million RBCs per cubic mm of blood.

3. PlateletsWhen a blood vessel is cut, blood comes out immediately. After some time, a dark red clot is formed on the cut. This is formed by cells called platelets in blood. When the platelet count decreases, excessive bleeding takes place and may even cause death.

Blood flows through narrow pipe-like structures in the body, known as blood vessels. These blood vessels transport food, oxygen and waste within the body.

Blood vessels are of two types:

1. ArteriesArteries have thick elastic walls and transport oxygen-rich blood from the heart to the other parts of the body. The blood in the arteries is bright red in colour. Blood flows through the arteries at high pressure, because of which the arteries have thick elastic walls. When an artery is cut, blood rushes out immediately. The arteries divide into smaller vessels when they enter an organ, and further divide into thin tubes called capillaries. These capillaries supply oxygen and nutrients to the tissues and also collect waste and carbon dioxide.2. VeinsVeins have valves on their inner lining that allow blood to flow only in one direction. They carry blood low in oxygen content. Veins have valves that allow blood to flow in one direction - towards the heart - only. Veins have thin walls. That is why when a vein is cut blood comes out slowly and continuously. A number of capillaries together form a vein.

The heart pumps blood through our body. It is located in the chest cavity with its lower parts towards the left. Its size is that of the person's fist. The pumps blood rich in carbon dioxide to the lungs, and oxygen-rich blood to the other parts of the body. It also prevents blood rich in oxygen from mixing with blood rich in carbon dioxide. It has four chambers. The two upper chambers are the atria and the two lower chambers are the ventricles. The partition between the two chambers is called the septum. Blood rich in oxygen is pumped out from the left ventricle to all parts of the body. Blood rich in carbon dioxide is pumped out from the right ventricle to the lungs through the pulmonary artery. It is the only artery in the human body that carries carbon dioxide-rich blood. The pulmonary vein is the only vein in the body that carries oxygen-rich blood. The walls of the heart are made up of the most powerful muscles. The muscles of the heart contract and relax, which constitutes a heartbeat.

The walls of the heart are made up of the most powerful muscles. Their rhythmic contraction and relaxation constitute heartbeats.Heartbeat can be recognised by placing the palm on the left side of the chest.The device that amplifies the sound of a person's heartbeat is called a stethoscope and consists of a chest piece that holds a sensitive diaphragm. The pressure applied by blood on the walls of an artery at a particular part is the pulse. The number of times the heart beats in a minute is the same as the pulse rate.The best place to check pulse rate is the wrist. The ideal pulse rate is 70 to 80 per minute.

The cells in the body perform various activities. Waste products such as urea, uric acid and excess water are formed and have to be removed from the body. The process of the removal of waste produced in the cells in living organisms is called excretion. The organs that help in the process of excretion constitute the excretory system.

The excretory system of humans consists of the kidneys, the ureters, the urinary bladder and the urethra. The kidneys are the major organs of the excretory system.The useful and harmful substances in blood enter the kidneys, where the capillaries filter them. The useful substances are reabsorbed, but the harmful substances are removed along with water in the form of urine.  Urine consists of 95 per cent water, and a small percentage of urea and other waste products. The urine from the kidneys comes down through long tubes called the ureters, which open into the urinary bladder where the urine is stored temporarily. When the bladder fills, the urine is disposed. Excretory SystemThe functioning of the kidneys stops when there is an infection. This is known as kidney failure. As a result, waste products remain in the blood. When blood is not filtered, survival becomes difficult, so it is filtered through an artificial kidney. The process is called dialysis. The artificial kidney is called a dialysis machine. Sweat is an excretory product and it consists of water and salt. Sweat cools the body and helps to maintain normal temperature of the body.

Transport of Substances in Plants

Plants make their own food by taking in carbon dioxide from the air, minerals and water from the soil. They release oxygen and water vapour, and the process is termed photosynthesis. Plants get energy from the food to perform vital activities. Food and water are transported to various cells in the body. Transport of Water and Minerals

Root HairPlants take in water through their roots. All roots have a root cap to protect the tender root tip from getting damaged by the soil particles. When the plants grow, the roots branch and rebranch and get fixed in the soil. At the roots tips, there are a large number of cells (root hairs) that absorb water and nutrients from the soil. The amount of water absorbed is proportionate to the number of root hairs. As the number of root hair increases, the surface area also increases, and the plant absorbs more water and minerals.Xylem and phloem

Water and minerals reach different parts of the plant through pipe-like vessels.Each vessel is made up of thick-walled, elongated cells, known as conducting tissue. A tissue is a group of cells that perform a specialised function in an organism.The xylem and phloem constitute the vascular tissue. These are also known as conducting tissues. These tissues form a continuous network that is spread across the roots, stem, branches and leaves of the plant.

Transportation process - An example: The functioning of cells in Potato

Peel a potato, cut it into two pieces and slice its bottom Make a deep hole on the top part of the potato and make a potato cup. Put some sugar solution in the cup. Make a note of the level of the sugar. Pierce the outer wall of the potato with a pin. Place the potato in a container with water in such a way that it is partly immersed in water. Leave it undisturbed for some time. Now observe that the level of the sugar solution increases. This is because water moves from a glass beaker (low concentration) to a potato (high concentration).

By the force of suction, water and nutrients are transported to all parts of a plant. Water and minerals reach the leaves and use only a small amount to make food. There are small pores, called the stomata, on the lower surface of the leaves through which excess water is released in the form of water vapour.

The process of releasing water vapour from the leaves into the atmosphere through the stomata is called transpiration.Transpiration increases the moisture content of the atmosphere, thus bringing about a cooling effect in the immediate surroundings.

Suction develops in the plant when water from the leaves is lost in the form of water vapour. This force is used to absorb more water and minerals. The suction force is also known as the transpiration pull. It is strong enough to draw water even in tall trees.