The document Chapter Notes 1 - Chapter 15: Light, Science Class 7 | EduRev Notes is a part of the Class 7 Course Science Class 7.
All you need of Class 7 at this link: Class 7

The path of light is always straight and never curved. Light doesn't bend. Examples to show that light travels in a straight line are light emitted by a torch light and light emitted from the headlights of a vehicle. The direction of light can be changed only by reflection.

The bouncing of light by any smooth surface, like a mirror, is called reflection of light.

Due to the reflection of light, the impression of an object formed in a mirror is called the image of the object. As the distance of the object from the mirror increases, the distance of the image also increases. The concept that images in a mirror are located at the same distance behind the mirror as the object in front of it is mainly used in interior decoration and in architecture to make rooms appear brighter and bigger. Moreover, placing a mirror near lights, chandeliers and table lamps reflects the light over a larger area, and makes the room appear brighter. Images that cannot be captured on a screen are called virtual images.

Characteristics of an Image

The image formed by a plane mirror is:

A mirror maze is created based on the principle of reflection in plane mirrors. The maze has several plane mirrors placed at fixed angles to each other. When a person enters a mirror maze, he finds several images of himself and several passages. There is only one passage that is real, while all the others are all just images.

As the name suggests, images are inversed, i.e. the right part of an object appears on the left in its images, and the left part of the object appears to the right.For example, the word 'AMBULANCE' is painted left-right inversed on the vehicle so that when the driver of a vehicle in front looks into his rear - view mirror, he can make out the word AMBULANCE quickly and give way.

There are two types of spherical mirrors.

Convex MirrorIf the reflecting surface of a mirror is convex, then it is called a convex mirror. A convex mirror is also known as a diverging mirror or fish eye mirror.

The image formed by a convex mirror is virtual, erect and diminished. It means that a larger area is visible in a convex mirror than in a plane mirror of the same size. That is why convex mirrors have a variety of applications - as reflectors at sharp turns and tricky or 'blind' corners and in parking lots, and as rear-view mirrors in cars and on motorcycles. Rear-view mirrors enable the driver/rider to watch the road behind them. They are also used in super markets, stores and ATM centres as a security measure. Objects like thumb tacks, Christmas baubles and sunglasses act as convex mirrors.

The image formed by a plane mirror cannot be captured on a screen, and is called a virtual image. 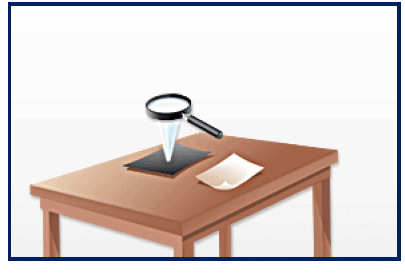 It is a lens that possesses at least one surface that curves inwards.

It is a lens that possesses at least one surface that curves inwards. When light rays are incident on a concave lens, they bend outwards or diverge. The rays diverge away from each other. Thus, a concave lens is also called a diverging lens. A concave lens is thinner at its centre than at its edges, and is used to correct short sightedness. It does not focus at a single point. The image formed by a concave lens is upright, virtual and smaller than the object. For example, the images seen through a peephole are different from normal holes, because these peep holes contain concave lenses.CONVEX LENS:

A convex lens makes the object magnified, when viewed through it. A convex lens is thick in the middle and thin at its edge. When light rays pass through a convex lens, they bend inwards and converge at a common point to form an image of the source of light.Rays from the sun converge to form its image as a bright spot. A convex lens converges light rays. Therefore, it is also called a converging lens. The image formed when the object is placed close to a convex lens is virtual, erect and magnified. Virtual images cannot be caught on a screen. Images that are caught on a screen are called real images. When the object is placed at a distance from a convex lens, the image formed is real, inverted and diminished.

A band of colours extending from violet to red is a rainbow. A rainbow is formed by the refraction and reflection of the sun's rays through raindrops.

A band of colours extending from violet to red is a rainbow. A rainbow is formed by the refraction and reflection of the sun's rays through raindrops. When it is raining in one part of the sky and sunny in another, a rainbow appears. The centre of the rainbows arc is always directed away from the sun. It is believed that in the past, Norsemen saw rainbows as bridges for gods to come to the earth from their home in the sky. Norsemen were the inhabitants of Norway. A rainbow lasted for about 9 hours on 14th March, 1994, at a place called Wetherby in Yorkshire, England. Although sunlight appears white, it is composed of seven colours. The colours in a rainbow are the colours of sunlight. A rotating disc has a pencil that serves as a rotator. The disc is covered with violet, indigo, blue, green, yellow, orange and red coloured papersWhen the disc is rotated, it appears white instead of the individual colours. This is because a mixture of colours of the rainbow in proper proportions produces white colour. The colours of a rainbow can be represented by the acronym: VIBGYOR: V - Violet, I - Indigo, B - Blue, G - Green, Y - Yellow, O - Orange and R - Red.

Dispersion of Light through a Prism

Take a glass prism. Allow a narrow beam of sunlight to pass through a small hole in the window of a dark room to fall on one face of the prism. The light bends when it passes through the prism. Now allow the light coming out of the other face of the prism to fall on a white sheet of paper or a white wall. Different component colours of white light bend differently, and so the constituent colours can be seen separately. Thus, the colours are said to have dispersed after passing through the prism. 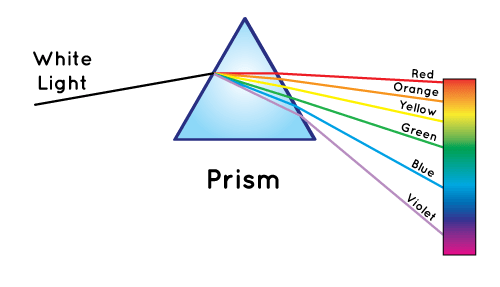