The document Short Notes: Respiration in Organisms Notes | Study Science Class 7 - Class 7 is a part of the Class 7 Course Science Class 7.
All you need of Class 7 at this link: Class 7

Questions.1 What is respiration?

Answer: Respiration is a biological process in which food is utilized to produce energy.

Questions.2 What is the end product of respiration in most of the organisms?

Questions.3 What is the end product of anaerobic respiration in muscle cells?

When the diaphragm moves down, the ribcage expands. This leads to the expansion inside the lungs. As a result, the air moves into the lungs. This process is called inspiration or inhalation. 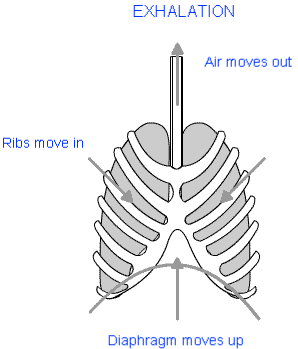 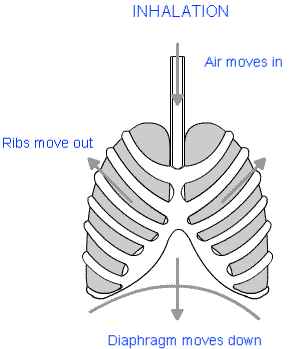 When the diaphragm moves up, the ribcage contracts. This leads to contraction of the lungs. As a result, the air moves out of the lungs. This process is called expiration or exhalation.

To show that carbon dioxide is released during exhalation:

Questions.1 What is breathing?

Answer: The process of taking in and giving out air; for respiration; is called breathing.

Questions.2 What is the respiratory organ in humans?

Questions.3 Which membrane controls the movement of lungs?

BREATHING IN OTHER ANIMALS

Animals, which belong to amphibia, reptilian, aves and mammalia, use the lungs for breathing. Amphibians breathe through their skin, when they are in water. Smaller animals have different organs for breathing.

Breathing In Fish: Fish have a pair of gills. The breathe air; dissolved in water; through gills.

Breathing In Cockroach: Cockroach and other insects breathe through spiracles and tracheae. There is a network of hollow tubes running through the body of an insect. These hollow tubes are called trachea. Each trachea opens on the body surface in the form of very small pore. These pores are called spiracles.

Breathing In Earthworm: Earthworms breathe through their skin. The skin of earthworm always remains moist, which helps in breathing.

Breathing In Plants: Plants can be of various sizes. Developing respiratory organs could not be a fruitful solution for plants; because of their unlimited growth. Each plant part breathes through its external layer of cells. Roots breathe through root hairs. Stems breathe through epidermis. Leaves have numerous small pores; called stomata; for breathing.

The document Short Notes: Respiration in Organisms Notes | Study Science Class 7 - Class 7 is a part of the Class 7 Course Science Class 7.
All you need of Class 7 at this link: Class 7