The document Short Notes: Physical & Chemical Changes Notes | Study Science Class 7 - Class 7 is a part of the Class 7 Course Science Class 7.
All you need of Class 7 at this link: Class 7

We see different types of changes; everyday in our surroundings. Growth of tree, rising of sun, setting of sun, different shape and size of moon, burning of coal, paper, wood, etc. are the examples of changes around us.

Physical Properties: Shape, Size and State of substance are known as physical properties. For example; when a sheet of paper is folded, its shape changes and this is an example of change in physical property.

Irreversible: Things or processes which cannot be reversed are called irreversible. For example, when milk turns into curd; it cannot be changed back to milk and hence is an irreversible change.

Change in which only physical properties of a substance change and no new substance is formed is called Physical Change.

Most of the physical changes are reversible, this means we can get the substance back even after the change.

Folding of a paper sheet: A paper can be folded or unfolded and hence it is an example of physical change. Moreover, no new substance is formed in this process, so it is a physical change.

Tearing of paper sheet: Even after being torn in very small pieces; each piece is a piece of paper. Since no new substance is formed in this process, so it is a physical change.

Melting of ice into water: In melting, only the state of water changes. Water can be changed to ice and vice-versa. This is an example of physical and reversible change.

Freezing of water:After freezing, water changes into ice. In this change; there is only the change in the state of water. Water can be obtained back from ice; by melting.

Change of water into vapour (Vaporisation): Vapour is another state of water. Water can be obtained after condensation of vapour. This is a physical and reversible change.

Change of vapour into water (Condensation): This is also a physical and reversible change as water can be changed into vapour again by the process of vaporization.

Stretching of a rubber band: In this change, only the size of the rubber band changes. The rubber band comes back in its original shape and size, once it is released. This is a physical and reversible change.

Reaction between vinegar and Baking Soda: Vinegar is an acid (Acetic acid). The chemical name of baking soda is sodium hydrogen carbonate or sodium bicarbonate.

These reactions are irreversible, as original substance cannot be retrieved from these by simple physical processes.

These are chemical changes as new substances are formed after change. Original substances cannot be retrieved by simple physical processes.

Rusting of Iron: Deposition of a brown layer on iron is called rusting. In rusting, a new substance is formed. The chemical structures of iron and rust are completely different. Rust is iron oxide. Iron is a grey-black material while rust is reddish brown

Thus, this is a chemical and irreversible change. Reaction in rusting can be written as follows:

When articles made of iron come in contact with moisture present in air, they get rusted. Iron is converted into iron oxide, i.e. rust. The iron article becomes weak in due course as all the iron slowly turns into rust. This is corrosion of iron. Rusting gives a huge monetary loss to the people and nation. 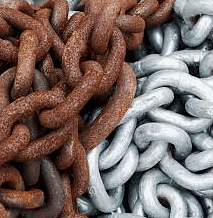 Painting: articles such as; iron gates, grills, etc. are painted at regular intervals of time.

Applying of layer of grease: Applying a layer of grease prevents the iron articles from coming in contact with moist air. This prevents rusting. That is why grease is applied over the chain of bicycle and also over many machine parts.

The document Short Notes: Physical & Chemical Changes Notes | Study Science Class 7 - Class 7 is a part of the Class 7 Course Science Class 7.
All you need of Class 7 at this link: Class 7