Adivasis, Dalits, Muslims, women and other marginal groups argue that simply by being citizens of a democratic country, they possess equal rights that must be respected. Many among them look up to the Constitution to address their concerns. Rights are translated into laws to protect groups from continued exploitation and policies are formulated to promote the access of these groups to development. 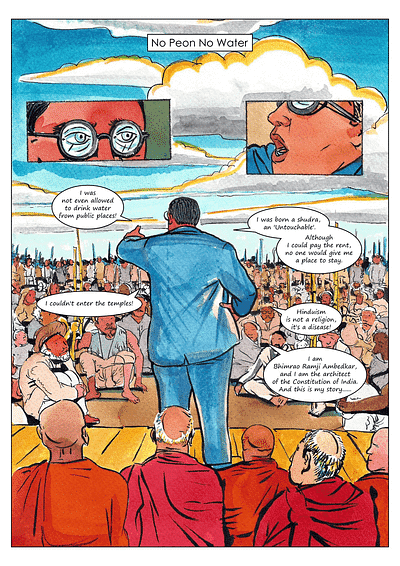 Article 17 of the Constitution states that untouchability has been abolished – this means is that no one can prevent Dalits from educating themselves, entering temples, using public facilities etc. It also means that it is wrong to practice untouchability and that this practice will not be tolerated by a democratic government. In fact, untouchability is a punishable crime now.

There are other sections in the Constitution that help to strengthen the argument against untouchability – for example, Article 15 of the Constitution notes that no citizen of India shall be discriminated against on the basis of religion, race, caste, sex or place of birth. This has been used by Dalits to seek equality where it has been denied to them.

Therefore, Dalits can ‘invoke’ or ‘draw on’ a Fundamental Right (or Rights) in situations where they feel that they have been treated badly by some individual or community, or even by the government.

Laws for the Marginalised

The government makes laws to protect its citizens. There are specific laws and policies for the marginalised in our country. There are policies or schemes that emerge through other means like setting up a committee or by undertaking a survey etc. The government then makes an effort to promote such policies in order to give opportunities to specific groups.

As part of their effort to implement the Constitution, both state and central governments create specific schemes for implementation in tribal areas or in areas that have a high Dalit population. For example, the government provides for free or subsidised hostels for students of Dalit and Adivasi communities so that they can avail of education facilities that may not be available in their localities.

In addition to providing certain facilities, the government also operates through laws to ensure that concrete steps are taken to end inequity in the system. One such law/policy is the reservation policy that today is both significant and highly contentious.

Protecting the Rights of Dalits and Adivasis

In addition to policies our country also has specific laws that guard against the discrimination and explitation of marginalised communities.

This Act was framed in 1989 in response to demands made by Dalits and others that the government must take seriously the ill treatment and humiliation Dalits and tribal groups face in an everyday sense. While such treatment had persisted for a long time, it had acquired a violent character in the late 1970s and 1980s. During this period, in parts of southern India, a number of assertive Dalit groups came into being and asserted their rights – they refused to perform their so called caste duties and insisted on being treated equally.

The Act distinguishes several levels of crimes. Firstly, it lists modes of humiliation that are both physically horrific and morally reprehensible and seeks to punish those who

(i) force a member of a Scheduled Caste or a Scheduled Tribe to drink or eat any inedible or obnoxious substance;

(ii) forcibly removes clothes from the person of a member of a Scheduled Caste or a Scheduled Tribe or parades him or her naked or with painted face or body or commits any similar act which is derogatory to human dignity.

Secondly, it lists actions that dispossess Dalits and Adivasis of their meager resources or which force them into performing slave labour. Thus, the Act sets out to punish anyone who

(iii) wrongfully occupies or cultivates any land owned by, or allotted to, a member of a Scheduled Caste or a Scheduled Tribe or gets the land allotted to him transferred.

Adivasi Demands and the 1989 Act

The 1989 Act is important for another reason – Adivasi activists refer to it to defend their right to occupy land that was traditionally theirs. Activists have asked that those who have forcibly encroached upon tribal lands should be punished under this law. They have also pointed to the fact that this Act merely confirms what has already been promised to tribal people in the Constitution – that land belonging to tribal people cannot be sold to or bought by non-tribal people. In cases where this has happened, the Constitution guarantees the right of tribal people to re-possess their land.

Assertive: An assertive person or group is one that can express themselves and their views strongly.

Confront: To come face to face or to challenge someone or something.

Dispossessed: To possess is to own something and to be dispossessed is to have to give up ownership or to give up authority.

Ostracise: This means to exclude or banish an individual or a group.

Morally reprehensible: This refers to an act that violates all norms of decency and dignity that a society believes in. It usually refers to a hideous and repugnant act that goes against all the values that a society has accepted.

Policy: A stated course of action that provides direction for the future, sets goals to be achieved or lays ot principles or guidelines to be followed and acted upon. In this chapter, we have referred to government policies. But other institutions like schools, companies, etc. also have policies.