The document Chapter Notes - 2, Conservation of Plants & Animals, Science, Class 8 | EduRev Notes is a part of the Class 8 Course Science Class 8.
All you need of Class 8 at this link: Class 8

Conservation of Animals And Plants

DEFORESTATION AND ITS CAUSES

A great variety of plants and animals exists on earth. They are essential for the wellbeing and survival of mankind. Today, a major threat to survival of these organisms is deforestation. Deforestation means clearing of forests and using that land for other purposes.

Trees in the forest are cut for some of the purposes mentioned below:

Deforestation increases the temperature and pollution level on the earth. It increases the level of carbon dioxide in the atmosphere. Ground water level also gets lowered. Deforestation disturbs the balance in nature. If cutting of trees continues, rainfall and the fertility of the soil will decrease. Moreover, there will be increased chances of natural calamities such as floods and droughts. Plants need carbon dioxide for photosynthesis. Fewer trees would mean that less carbon dioxide will be used up resulting in its increased amount in the atmosphere. This will lead to global warming as carbon dioxide traps the heat rays reflected by the earth. The increase in temperature on the earth disturbs the water cycle and may reduce rainfall. This could cause droughts.

Deforestation is a major cause which leads to the change in soil properties. Physical properties of the soil get affected by plantation and vegetation. Fewer trees result in more soil erosion. Removal of the top layer of the soil exposes the lower, hard and rocky layers. This soil has less humus and is less fertile. Gradually the fertile land gets converted into deserts. It is called desertification.

Deforestation also leads to a decrease in the water holding capacity of the soil. The movement of water from the soil surface into the ground (infiltration rate) is reduced. So, there are floods. The other properties of the soil like nutrient content, texture, etc., also change because of deforestation.

The plants and animals found in a particular area are termed flora and fauna of that area. Sal, teak, mango, jamun, silver ferns, arjun, etc are the examples flora. Endemic species are those species of plants and animals which are found exclusively in a particular area. They are not naturally found anywhere else. A particular type of animal or plant may be endemic to a zone, a state or a country. Sal and wild mango are two examples of the endemic flora. Bison, Indian giant squirrel and flying squirrel are endemic fauna.

The destruction of their habitat, increasing population and introduction of new species may affect the natural habitat of endemic species and endanger their existence.

These are the protected areas which provide protection and suitable living conditions to wild animals. Sanctuaries are places where killing (poaching) or capturing of animals is strictly prohibited.A sanctuary may be a reserved natural area meant for the preservation and development of threatened/endangered species. For example, there is the Kaziranga Wildlife Sanctuary for Rhinoceros in Assam.

Comparison of a Sanctuary and a National Park:

ENDANGERED ANIMALSAnimals whose numbers are diminishing to a level that they might face extinction are known as the endangered animals.

ECOSYSTEMAll the living components, such as plants, animals and microorganisms and non-living components such as climate, soil, river, deltas etc. constitute an ecosystem. An ecosystem can be as small as a pond or as big as an ocean or a forest. 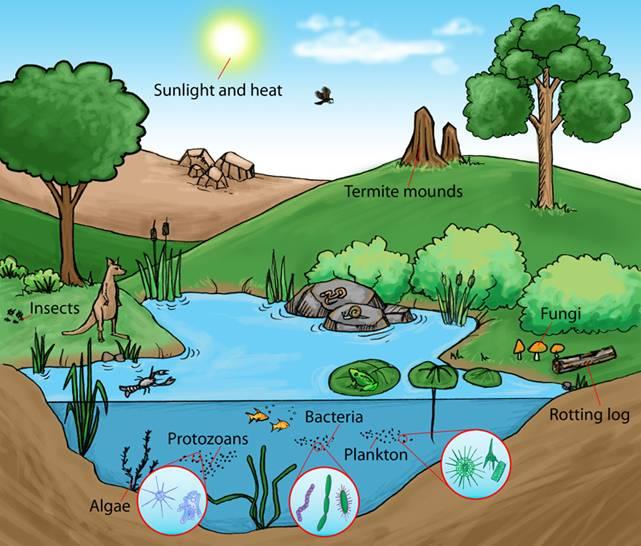 Red Data Book: The source book which keeps a record of all the endangered animals and plants. There are different Red Data Books.

The way human beings move from their home town to another city in search of livelihood, animals also move from one place to other in search of food. This phenomenon is called migration.

Migratory birds fly to far away areas every year during a particular time because of climatic changes. They fly for laying eggs as the weather in their natural habitat becomes very cold and inhospitable. You will be amazed to know that Siberian Cranes travel about 4000 kms from Siberia to India every year in winter season. Some species of fish and tortoise also migrate thousands of kilometers to lay their eggs.

Paper can be recycled five to seven times for use. If each one saves at least one sheet of paper in a day, we can save many trees in a year. We should save, reuse used paper and recycle it. By this we not only save trees but also save energy and water needed for manufacturing paper. Moreover, the amount of harmful chemicals used in paper making will also be reduced. In India, we have some method of paper recycling by way of rag pickers and dealers of old and waste items. You may have observed your parents selling old newspapers to the Kabadiwala. They sell them to shopkeepers and paper bag manufacturers. Some of the papers land in paper manufacturing plants for recycling.REFORESTATION:

Reforestation is restocking of the destroyed forests by planting new trees. The planted trees should generally be of the same species which were found in that forest. We should plant at least as many trees as we cut. Reforestation can take place naturally also. If the deforested area is left undisturbed, it reestablishes itself. In natural reforestation there is no role of human beings. We have already made a tremendous damage to our forests. If we have to retain our green wealth for generations, plantation of more trees is the only option.