The document Chapter Notes 2 - Chapter 12: Reproduction in Plants, Class 7, Science | EduRev Notes is a part of the Class 7 Course Science Class 7.
All you need of Class 7 at this link: Class 7

The process by which a living being produces its offspring is called reproduction.

(a) Budding: This method is used by unicellular plants; like yeast. Yeast is a fungus and fungi are also known as non-green plants. The yeast cell produces a bud which gets its own nucleus. The bud develops to certain size and detaches from the mother cell to produce the new yeast.

(b)Fragmentation: In some simple plants, the plant body is divided into smaller fragments. Each fragment then develops into a new plant. Example: Spirogyra. 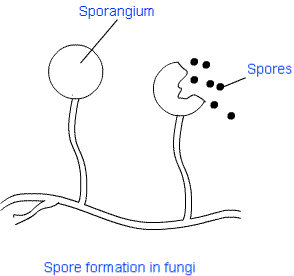 (d) Vegetative Propagation: When a new plant is developed by a vegetative part; such as root, stem or leaf; it is known as vegetative propagation. For example: when the tuber of potato is cut into several pieces and each piece bears an ‘eye’; each piece produces a new plant. The stems of moneyplant, rose, mango, etc. can produce new plants when they are inserted in soil. The leaf of bryophyllum produces new plants through its notches.

Q(A) Give an example of an organism which reproduces by budding.

Q(B)How many parents are involved in asexual reproduction? Flower: Flower is a special organ of flowering plants (angiosperms) which works as the reproductive system. A flower is composed of four distinct whorls.

(1) The outermost whorl is called calyx. It is composed of green leaf-like structures; called sepals.

(2) The second whorl is called corolla. It is composed of colourful structures; called petals. Petals are colourful so that insects and other animals can be attracted towards them. This is necessary for pollination.

(3) Androecium: The third whorl is called androecium. It is composed of stamens. Stamen has two main parts. The tube-like portion is called filament. The capsule like structure at the top is called anther. The anther produces pollen grains; which are the male gametes.

(4) Gynoecium: The whorl at the center is called gynoecium. It has a swollen base; called ovary and a tube-like structure; called style. The top of the tube is somewhat flattened and is called stigma. Ovary produces the eggs or female gametes.

QA -What is the benefit of colourful petals for plants?

QB - What is the name of the male gamete in a flowering plant?

The transfer of pollen grains from anthers to stigma is called pollination. Pollination is of two types, viz. self pollination and cross pollination.

Self Pollination: When anthers of the same flower are transferred to the stigma; it is called self pollination. The fusion of the male gamete and the female gamete is called fertilization. When pollen settles on top of the stigma, it germinates to produce a pollen tube. The pollen tube enters the ovary through the style. Male nuclei are transferred to the ovary, through the pollen tube. The cell formed, just after fertilization, is called zygote. Zygote develops into embryo. Each embryo develops into a seed. The seed is an embryo which is enclosed in a protective coat. The ovary gets transformed into fruit.

If all the seeds were to germinate near the mother plant, the new plants shall not get adequate resources; like sunlight, air and nutrients. For proper growth of the new plants, it is necessary that they develop away from the mother plant. For this, it is necessary that seeds are spread far and wide. The process of spreading seeds to different places is called dispersal of seeds. Many agents of seed dispersal assist the plants in this process.

Dispersal by Wind: Seeds of some plants are light-weight and some hair-like or wing-like structures are present on them. Such seeds float on air and are thus dispersed by wind. Example: Dandelion, maple, drumstick, etc.

Dispersal by Water: Dispersal by water takes place in some aquatic plants and in some which grow near a water body. Seeds of water lily float and thus dispersed by water. The coconut seed has a tough fibrous covering which has plenty of air inside. This helps the coconut seeds in floating on water.

Dispersal by Animals: Some seeds have spine like structures on them. They get stuck to the fur of animals and thus get spread to different places. Examples; Beggar tick, Xanthium, Urena, etc. Some seeds are swallowed by birds and animals along with fruits. These seeds get dispersed with bird or animal droppings.

Dispersal by Bursting: Some fruits burst open when they mature. The force of bursting is enough to spread the seeds. Examples; Ladyfinger, castor, balsam, etc.

Q1- What is pollination?

Answer: Transfer of pollen grains from anther to stigma is called pollination.

Q2 - Give two examples of seeds which are dispersed by wind.