The document Short Notes: Forests - Our Lifeline Notes | Study Science Class 7 - Class 7 is a part of the Class 7 Course Science Class 7.
All you need of Class 7 at this link: Class 7 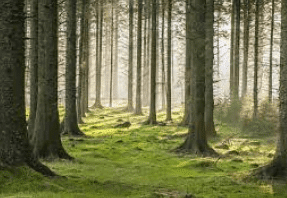 An area with high density of trees is called a forest. A forest is a system which is composed of plants, animals and microorganisms.

Forest is the habitat for a variety of living beings. Many plants, animals and microbes live in the forest.

A typical tree forest is composed of two distinct layers, viz. overstory ( or canopy) and understory. A tree can be divided into two parts: trunk and branches. The branches of a tree make its crown. Crowns of several trees; in the forest; make the canopy. In dense forests, the canopy looks like the roof of the forest. There are many animals and creatures which live only on the canopy, e.g. monkeys.

Crowns of trees come in various shapes. Some common examples are shown in the given figure. 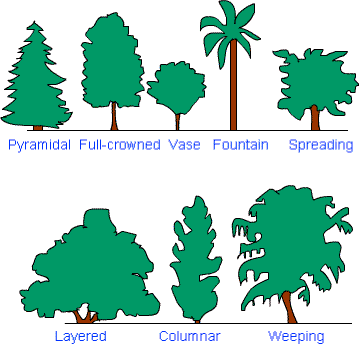 The lower layer of the forest is called understory. It is composed of herbs and shrubs. The understory is a different world in itself. The understory may not get proper sunlight in dense forests.

There are many animals and creatures which live only in the understory of a forest.

Answer: An area with dense cover of trees is called forest.

Ques 2 - What is overstory in a forest?

Answer: The upper leafy portion of a forest is called overstory.

Important Forest Produce: Many important forest produce are useful for us. Some examples are given below:

Forest as a System:

When an animal or a plant dies, its dead remains rot in due course of time and turn into soil-like thing. The process is called decomposition and microorganisms carry out this process. Decomposition is the process by which all the raw materials are returned to the nature. The soil-like thing made after decomposition is called humus. It makes the soil highly fertile. The topsoil of forest is fertile because of presence of humus.

Role of Forest in Water Cycle: The roots of the trees make the soil porous. Rainwater seeps through these pores and recharge groundwater. Forests prevent wastage of rainwater in the form of runoff. Forests also prevent flash floods by slowing down the movement of water.

Role of Forest in Soil Conservation: The roots of the trees hold the topsoil in place. This prevents soil erosion by wind or by running water.

Deforestation and its Effect: Large scale cutting of trees to clear land for human use is called deforestation. Due to growing human population, vast tracts of forest have been removed. This has created many problems. Some of them are given below:

Ques 1 - What do you understand by deforestation?

Answer: Large scale cutting of trees to clear land for human use is called deforestation.

Answer: The part of the topsoil which is composed of decomposed remains of plants and animals is called humus.

The document Short Notes: Forests - Our Lifeline Notes | Study Science Class 7 - Class 7 is a part of the Class 7 Course Science Class 7.
All you need of Class 7 at this link: Class 7