The document Chapter Notes 2 - Chapter 9 - Soil, Class 7, Science | EduRev Notes is a part of the Class 7 Course Science Class 7.
All you need of Class 7 at this link: Class 7

Soil: Mixture of rocks particles, sand and humus is known as soil. Soil supports the growth of plants by holding their roots and supplying water to them.

Formation of soil: Soil is formed by weathering. Weathering is the process of breaking down of rocks by the action of wind, water and climate. Formation of even one inch of soil takes many years.

Humus: The decaying dead matters in soil are called humus. Humus makes the soil fertile and provides nutrients to the plants.

Soil Profile: Different vertical layers of soil are known as soil profile. The feel (texture), colour and chemical compositions of soil are different in each layer. 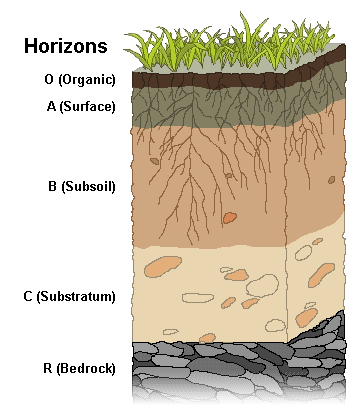 Horizons: Layers of soil are referred as horizons. Horizons of soil are categorized into four types: A-horizon, B-horizon, C-horizon and Bedrock.

B-horizon: The next layer of the soil from top is known as B-horizon. This layer is harder and more compact than the top soil. This is generally known as the middle layer of soil. This is less rich in humus but contains most of the minerals present in the soil.

C-horizon: The third layer of soil is known as C-horizon. C-horizon is made of small lumps of rocks with cracks and crevices.

Bedrock: The layer below the C-horizon is known as bedrock. Bedrock is composed of rocks and is hard to dig with spades.

Type of Soil: Size of particles of soil is very important for the properties of soil. So, soils are categorized mainly in three types based on the proportion of size of particles. These are Sandy Soil, Clayey Soil and Loamy Soil. 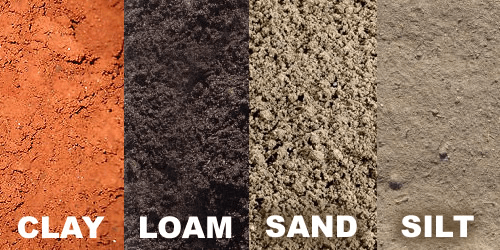 Sandy Soil: Particles of sandy soil are larger in size. Because of larger in size, sand particles cannot fit close together and hence there is enough space among them. These spaces are filled with air. Water drains quickly through sandy soil. So, sandy soil is called well aerated, light and dry.

Sandy soil is not fit for vegetation as it does not retain water. However, millets can be grown on sandy soil.

Loamy Soil: Particles of loamy soil are smaller than sand and larger than clay. Loamy soil is the mixture of sandy soil, clayey soil and silt. Silt is the deposit in river beds.

Loamy soil has right water holding capacity and is well aerated. This is considered as the best soil for the growth of plants.

The percolation rate of water in sandy soil is fastest and in clayey soil is slowest.

Sandy soil: Sandy soil is not fit for any crop as it does not retain water. However, some thorns and bushes do grow on sandy soil. Millets can be grown on sandy soil.

Clayey Soil: Clayey soil is best suited for paddy, as it can retain water for a longer time. This is also suitable for wheat and grams.

Loamy Soil: Loamy soil is considered the best for almost all types of crops. It is suitable for lentils and other pulses.

Sandy Loam: Sandy loam soil is suitable for the growth of cotton plants as it can easily drain water and is well aerated.

Soil Erosion: Removal of topsoil by weathering agents; such as wind, water and ice is known as soil erosion. Soil erosion affects the fertility of soil, as humus present in the soil is eroded along with soil. It is important to prevent the soil erosion.