The document Chapter Notes 2 - Complete Chapter: Heat, Class 7, Science | EduRev Notes is a part of the Class 7 Course Science Class 7.
All you need of Class 7 at this link: Class 7

HeatHeat is the transfer of energy from a hot body. The sense of touch can be used to understand the degree of hotness or coldness of something. But the sense of touch is not reliable and cannot be always used to say how much hot anything is.
Moreover, using the sense of touch can be risky in case of something very hot. Thus, hotness of anything is measured in terms of TEMPERATURE in reliable way. To measure temperature a device called THERMOMETER is used.Unit of heat:There are three units which are used to measure the temperature: Degree Celsius, Fahrenheit and Kelvin.

Kelvin: Kelvin is written as K. For example 100K; it is read as hundred Kelvin.Thermometer:Thermometer is a device which is used to measure temperature. Digital Thermometer: In digital thermometer, reading of temperature is displayed digitally as in digital watches. This is safer because no mercury is used in this. It is important to note that mercury is a highly toxic substance.

Maximum-Minimum Thermometer: Maximum – minimum thermometer is used to measure the daily temperature to prepare weather reports.Reading of thermometer and measuring of temperature:

Use of Laboratory Thermometer:

Difference between clinical and laboratory thermometer: 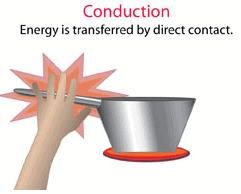 Example: When one end of an iron rod is put over flame then part which is nearer to the flame is heated first and heat is gradually transferred to the other end of the rod. This happens because particles of iron rod which are nearer to the flame receive the heat and transfers this to the adjacent particles.
Subsequently, the adjacent particles transfer the heat to the next adjacent particles. This process continues and heat reaches to the other end of the rod. Thus, heat transfer in solid takes place through conduction.Conductor and Insulator:Materials which allow heat to pass through it are called conductor or good conductor of heat, such as iron, copper, aluminium, etc. All metals are good conductors of heat. Since, mercury is a metal and found in liquid state at room temperature, that’s why it is used in thermometer.

Since metals are the good conductor of heat that’s why kitchen utensils are made of metals or alloys of metals.

Materials which do not allow heat to pass through them are called bad conductor or poor conductor of heat. They are also called insulators. Example: rubber, wood, plastic, etc. This is the cause that handles of frying pan or other kitchen utensils are made of plastic.Convection:
The transfer of heat because of movement of the molecules of the medium; via mass transfer; is called convection or convection of heat.

Water and air are bad conductors of heat. But they do become hot, in spite of being bad conductors. Heat transfer in fluids takes place through convection.Convection in water: When water is heated in a pan, the particles of water which are near the source of heat; get heated first. Because of heating, they become light; and rise in water. The gap which is created because of rise of hot particles is filled cold particles of water from the surrounding area.
Thus a cyclical movement of particles begins and ends up heating the whole water of the pan. The cyclical movement in fluids because of heating is called convection current.Convection in air: Air gets heated because of convection; the way water gets heated. Air near the source of heat gets heated and rises above. This leaves a gap; which is filled by the colder air from the surrounding. The convection current thus starts in air which results in heating up of air.

When you place your palm above a flame you will feel the hotness of the flame. But when you will place your palm below the flame the area will be colder. This shows how the colder air from below moves up; due to convection current.Land and Sea Breeze:Sea Breeze: In coastal areas, the breeze that moves from sea surface to the land is called sea breeze. This happens because, during daytime, land gets heated more quickly than water. As a result, warm air from land rises up; leaving a gap.
To fill that gap, colder air from the ocean surface rushes towards the land. This phenomenon continues and a continuous flow of cold air keeps coming towards the land. This gives rise to the phenomenon which is called the sea breeze. Because of this, people living in coastal areas prefer to live in a sea facing house. 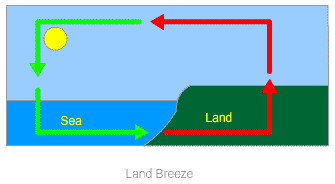 Land Breeze: In coastal areas, the breeze which moves from land towards the sea is called land breeze. In the night, the land cools down more quickly than the ocean surface. This makes the air over the water surface warmer than air over the land surface.
Warmer air over the water surface rises in the air and air from the land rushes towards the water surface to fill the gap. This phenomenon continues which creates a flow of air from land to the sea. This phenomenon is called land breeze.Radiation:All hot bodies emit heat by the process of radiation. Radiation of heat does not require a medium. Sunlight comes to the earth because of radiation as there is no medium present between the atmosphere of the earth and the sun.

One can feel the heat of bonfire by standing around it. We get warmth from the room heater because of radiation. Now-a-days many kitchen utensils come in black color, since utensils of black color absorb more heat and thus cooking becomes faster.Woolen Cloth: Woolen clothes are used in winter season. Wool is a poor conductor of heat. In addition to it; air gets trapped in woolen fiber to further increase the poor conductivity of wool. This prevents the radiation of heat of our body to the surrounding and prevents the cold from surrounding to affect our body. Thus, wearing woolen cloth makes one comfortable in winter season.Important Terms: