The document Introduction to Light Class 8 Notes | EduRev is a part of the Class 8 Course Science Class 8.
All you need of Class 8 at this link: Class 8 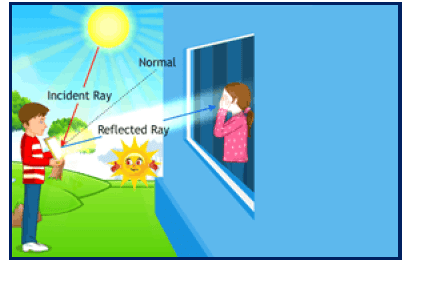 Light is a form of energy given out by a self luminous body, which travels into infinite media. Light makes things around us visible. Objects that do not give out light of their own are called non-luminous objects. They just reflect light that falls on them. We see with our eyes. When light reflected from an object enters our eyes, the object becomes visible. A mirror changes the direction of light that falls on it. The light ray that falls on a mirror is called the incident light ray. The ray that comes back from the surface after reflection is called the reflected light ray. The point where the incident ray strikes the reflecting surface is called the point of incidence. A line drawn perpendicular to the mirror at the point of incidence is the normal. According to the laws of reflection, the incident ray, the normal at the point of incidence, and the reflected ray lie in the same plane; and the angle of incidence is equal to the angle of reflection.Light rays are visualised as parallel rays. If the rays, after reflection from a surface, are parallel, then the reflection is termed as regular reflection. The reflection from a plane mirror is an example of regular reflection. When parallel rays, after reflection from a surface, are not parallel, then it is called diffused reflection or irregular reflection. The reflection from an uneven surface is diffused reflection. If a reflected light ray is reflected again on being incident on another surface, it is termed multiple reflections. Multiple reflections are used in periscopes. Periscopes are used in submarines, war tanks and by solders in bunkers to see objects that are not visible directly. In a barber's shop, we see the back of the head using multiple reflections of two mirrors. In a kaleidoscope, beautiful patterns are formed due to multiple reflections.Light and EyesWe see objects around us with our eyes. The eye is an important sense organ. The human eye is roughly spherical in shape. Its transparent front part is called the cornea. Behind the cornea, there is a muscular structure called the iris. There is a small opening in the iris, whose size can be controlled, and is called the pupil. The iris controls the amount of light entering the eye. Behind the pupil, the eye has a lens, which is thicker in the middle. The lens converges light on the retina, which has a number of nerves. The nerves carry the sensations to the brain through the optic nerve. The nerves contain two types of cells - cones and rods. The cones are sensitive to bright light, while the rods are sensitive to dim light. The cones also distinguish the colour of an object. The small region where the optic nerve and the retina meet has no sensory cells, and is called the blind spot.The impression of an image on the retina lasts for th of a second. If 16 still images of an object are flashed before the eye per second, then the eye perceives the object as moving. The eye lids protect the eye from dust. The eye has the ability to form a clear image of a near and a far object. This ability is called its power of accommodation. For a normal eye, the distance for clear vision is 25 cm. This differs from person to person, and varies with age. Some persons can see near objects clearly and some others far off objects. These defects can be corrected using suitable corrective lenses. The eye sight of some people becomes foggy in their old age, and objects appear dim, due to cataract. Some people have no vision since birth. Such people use Braille to read and communicate.