The document Chapter Notes - Accounting for Bills of Exchange - Accountancy, Class 11 | EduRev Notes is a part of the Commerce Course Accountancy Class 11.
All you need of Commerce at this link: Commerce

ACCOUNTING FOR BILLS OF EXCHANGE

After studying this chapter, students shall be able to:

Suggested Methodology :-Illustration-cum-Explanation Method.A Bill of Exchange and Promissory Note both are legal Instruments which facilitate the credit sale of goods by assuring the seller that the amount will be recovered after a certain period of time. Both of these are legal instruments underthe Negotiable Instruments Act, 1881.

BILL OF EXCHANGE"A Bill of Exchange is an instrument in writing containing an unconditional order signed by the maker, directing a certain person to pay a certain sum of money only to, or the order of, a certain person or to the bearer of the instruments". Section 5 of the Negotiable instrument Act, 1881 Features of a Bill Exchange are

1. A bill of exchange must be in writing.

2. It must contain an order (and not a request) to make payment.

3. The order of payment must be unconditional.

4. The amount of bill of exchange must be certain.

5. The date of payment should be certain.

6. It must be signed by the drawer of bill.

7. It must be accepted by the drawee by signing on it.

8. The amount specified in the bill exchange in payable either on demand or on the expiry of a fixed period.

9. The amount specified in the bill is payable either to certain person or to his order or to the bearer of the bill.

10. It must be stamped as per legal requirement.

Parties to a bill exchange

3. Payee:- Payee is the person who receives the payment from the drawee. Usually the Drawer and the payee is the same person. In the following cases, drawer and payee are two different persons.

(i) When the bill is discounted by the drawer from his bank- payee in the bank.

(ii) When the bill is endorsed by the drawer to his creditors, payee is the endorsee.

Kinds of Bills of Exchange

1) Trade Bills : Those bills that are written because of business transactions are called trade bills.

2) Accomodation Bill : Those bills that the business writes for mutual help are called accomodation bill.

Specimen of Bill of Exchange Note: Value Received means the bill has been issued in exchange of some consideration. These words are very important because law does not consider those agreements which have been made without consideration.

1. There must be an unconditional promise to pay a certain sum of money on a certain date.

2. It must be signed by the maker.

3. The name of the payee must be mentioned on it.

4. It must be stamped according to its value. Distinction between Bills of Exchange and Promissory Note :

2. Due Date : Due date is the date on which the payment of the bill is due.

(i) In case of 'Bill at Sight':- Due date is the date on which a bill is presented for the payment

3. Days of Grace: Drawee is allowed three extra days after the due date of bill for making payments. Such 3 days are known as 'Days of Grace'. It is a custom to add the days of grace.

Cash I : The bill is Bill After date.

Cash II : The bill is Bill After Sight. Solution: Due Date Date of Maturity

(i) The amount of discounting charges.

(ii) The amount that Ram will receives from his bank at the time of discounting the Bill.Solution: (i) Discounting Charges = Amount of Bill Discounted

7. Bill sent for collection: It is a process when the bill is sent to back with instruction to keep the bill till maturity and collect its amount from the acceptor on the date if maturity.

8. Dishonour of Bill: When the drawee (or acceptor) of the bill fails to make payment of the bill on the date of maturity, it is called DishonourofBill.

9. Noting of Bill: To obtain the proof of dishonour of a bill, it is re-sent to the drawee through a legally authorized persons called Notary public who charges a small fee for providing this service known as Noting charges.

11. Renewal of a Bill: Sometimes drawee is not in the position to pay the amount of the bill on maturity. Thus drawee request to the drawer to cancel the old bill & write a new bill with interest and if drawer agree, new bill is drawn with new maturity date. This process is called the 'Renewal of Bill'. The interest may be paid in cash or may be added in the amount of the new bill.

Illustration 3 : A requests B to renew his acceptance for Rs. 25,000 for 3 month together with interest @ 18% p.a. Calculate the amount of new bill drawn on A.Solution: Interest = Amount Outstanding

Amount Outstanding = Amount of Bill cancelled - any part payment made cash at the time of renewal of bill.

ACCOUNTING TREATMENT OF BILL TRANSACTIONS A. On the Due Date bill is Honoured:-

Note:- First Two entires are common in all the cases which we are going to discuss below.

Case -1 When the bill was retained by drawer till maturity

Case -II When the bill was discounted from the bank by owner before maturity.

Note :- In this case one additional book may be asked to maintained i.e. Endrosee Book

Case -IV When the bill is sent to bank for collection

Illustration 4: X sold goods to Y on 1st April, 2015 for Rs. 20,000 on credit and drew upon him a bill for the same amount payable after 3 months. Y accepted the bill and returned it to X. On the date of maturity bill was presented to Y for the payment and he honoured it.Pass the journal Entries in the books of both the parties when:

Case I : Bill is retained by the X till the date of maturity.Case II : Bill is discounted by X from his bank on 4th April @ 6% per annum.Case III: Bill is sent to Bank for collection on 1st July, 2013.Also record the Journal Entries in the books of Z (Case-Ill) In the Book of Y (Drawee)

Note: In the books of drawee these three entries remains same in all the cases 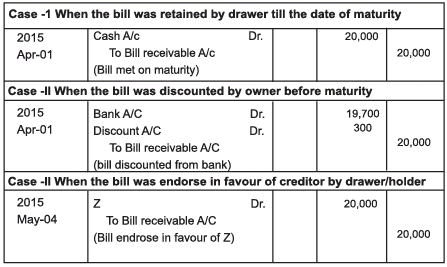 In the Book of Z (Endorsee)

NO ENTRY is passed on the date of maturity in the books of drawer if.

B. When Bill is dishonoured on the date of maturity.

Case I: Bill is retained by the drawertill the date of maturity.

Note: Entry passed in the book of Drawee will be SAME in all cases.

Case I : When the bill was discounted by owner before maturity

Case III: When the bill was entered in favour of creditor by drawer/holder

Case IV When the bill is sent to bank for collection

Illustration 5 : A sold good to B on April 1,2013 for Rs. 20,000 oncred it and drew upon him a bill for the same amount payable after 3 months. B accepted the bill and returned it to A. On the due date bill was dishonoured.Case I : Bill is retained by A till the date of maturity.Case II : Bill is discounted by A from his bank on 4th April, 2013 @ 6% perannumCase III: Bill is endorsed in favour of C on April, 4th, 2013Case IV : Bill is spent to bank for collection on July 1,2013

Solution In the Book of A (Drawer)

In the Book of C (Endorsee)

Note: In the books of drawee following three entries remains same in all the cases. C. Renewal of a Bill

Illustration 6: On 1st April,2015 Anil accepts a bill drawn by Sunil for 2 months for Rs. 15,000 in payment of a debt. Before the date of maturity Anil request sunil that he is not in the position to pay the due amount, so kindly cancel the bill & draw a new bill for the amount due 3 months Sunil agreed to draw a new bill for 3 months but he charged interest @ 15% per annum in cash. This bill is duly met on the maturity. Pass Journal entires in the books of both the parties.

Solution: In the Book of Anil (Drawee)

In the Book of Sunil (Drawer)

D. Retiring a bill under Rebate

Illustration 7: Mukesh sold goods to Jitender on July 1,2015 for Rs. 30,000 and drew a bill for the same amount for 3 months. Jitender accepted the bill and returned it to Mukesh, Jitender retired his acceptance on 4th August, 2015 under rebate of 8% per annum. Give Journal entries in the books of Mukesh and Jitender.Solution: In the Book of JITENDER (Drawee) In the Book of Mukesh (Drawer) 1. While calculating Date of Maturity the following point must be considered:

(i) In case "Bill at Sight" or "Bill on demand" 3 days of grace are NOT allowed.

(ii) When the term of bill is mentioned in no. of days, then

2. When the period is stated in months the date of maturity shall be calculated in terms of calender months ignoring the no. of days in a month.

Q.No.:-3 P sold goods to Q for Rs. 10,000 on Janauary 1,2015 and on the same day draws a bill on Q for the same amount for three months. Q accept it and returns it to P, who discounts it on 10th January, 2015 with his bank for Rs, 9850. The acceptance is dishonoured on the due date and the Noting charges were paid by bank being Rs.50. On 4th April, Q paid Rs. 2,050 (including Nothing charges) in cash and accepted new bill at 3 months for the amount togetherwith interest@ 12% per annum. Make Journal Entries in the books of P and Q to record transaction.

Q.No.:-4 Rajiv sold goods to Pankaj for Rs. 40,000 on January 1st, 2015. On the same date Rajiv drew a bill of the same amount for 3 months on Pankaj. The bill was accepted by Pankaj. Rajiv discounted the bill with his bank on 4th February, 2015 @ 12% per annum. On date of maturity, the bill was dishonoured and Noting charges amounted Rs. 200. Pankaj agreed to Pay Rs. 10,200 and accepted another bill for the remaining amount for 3 months together with inte rest @ 9 % perannum . On due date Pankaj make the payment.Give Journal Entries in the books of Rajiv and Pankaj.

Q.No.:-5 On 1st March 2015, Amit drew three bills of exchange on his debtor Shyam. First for Rs. Rs. 7000 for 1 month, second for Rs. 8,000 for two months and third for Rs. 10,000 for 4 months. Shyam accepted these bills.Amit endorsed the first bill to his creditor, Ram in full settlement of his account Rs. 7,100. This bill was met on maturity on 1st April, amit discounted the second bill from his bank for Rs. 7,800. This bill was dishonoured on due date and bank paid Rs. 100 towards noting charges. Amit drew another bill on shyam for the amount due along with Rs. 200 towards interest for 2 months for which shyam agreed.The third bill was paid by shyam under rebate of 12% p.a. One month prior to date of maturity. The fourth bill was lodged with bank for collection and it was duly met. Pass neccessary Journal entries in the books of amit and shyam.

Q.No7: Journalise the following in the books of Mohan under following circumstances:-(i) A bill of ? 4500 is drawn by Mohan & co. on Ram & Co. and accepted by later.(ii) If bill is retained till the date and realised on maturity.(iii) He discounted the bill with Bank of Baroda for ? 4380.