After studying this lessons you will be able to:

Some small size business entities do not follow the double entry system of maintaining the accounting records instead they maintains books of accounts under the system Accounting from incomplete records. The system in which no set rules of double entry system are followed is called Accounts from incomplete records. Sometimes, it is also termed as 'Single Entry System'

Under this system only the following accounts are maintained:

Under this system of maintaining accounts:

Books according to this system can be maintained only by those small entities in the form of sole Proprietorship or Partnership firms that are not bound to keep records of business transactions as per double entry system. Companies cannot maintain books underthis system because of legal provisions.

Ascertainment of Profit or Loss

The main objective of any business enterprise is to earn profits. In case of organization maintaining accounts under incomplete records the amount of profit or loss can be ascertained by following two method

Under this method, Profits or losses of the business are ascertained by comparing the Capital at the end and Capital at the beginning of the accounting period.

Under this method two statements are prepared:

A Statement of affairs is a statement showing the balances of assets (including cash and bank balance) on the right hand side and the balance of liabilities on the left hand side, on a particulars date. The difference in the total of two sides is known as capital.

A statement of affairs is very similar to Balances Sheet as prepared for the business entities maintaining accounts under double entry system, through it should not be described as a Balance Sheet

A Statement of Affairs is prepared as follows : 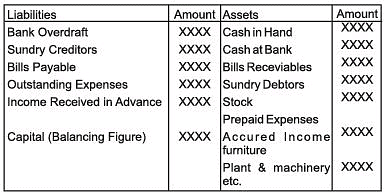 For ascertainment of profit or loss, the following steps shall be taken:

Step 1: Calculate the amount of 'Opening capital' (If not given in the Question) by preparing Statement of Affairs at the beginning of the accounting period.

Step2:  Calculate the amount of 'Closing Capital' by preparing 'Statement of Affair' at the end of the accounting period. 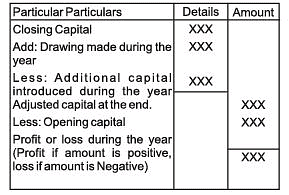 He sold his investment of 1500 at 3% premium and brought that money into the business. You are required to prepare a statement of profit or loss.

2 Mr. Hemant started his business on 1 st April 2015 with a capital of

During the year, he introduced

Aarushi started a business with a capital of

Sundry creditors on this date totalled

80,000. During the year she introduced a further capital m 1,50,000 and withdrew for household expenses

90,000. A certain her profit and prepare statement of affairs at the end of year.

Statement of Profit or Loss 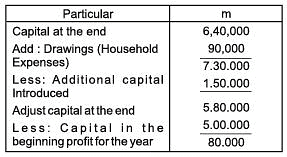 Miss Pooja runs a business. She was not maintaining her accounts on the double entry system. On April, 2015 She started the business with a capital of

Calculate the profit / loss of her business during the year using statement of affairs method.

Illustration 5: Mr. Shiva keeps his book by single entry. His position on 1st April, 2015 was as follows: cash in hand

500 During the year he with drew

450 for his domestic expenses and introduced

Prepare the Statement of Affairs and ascertain his profit or loss for the year.

STATEMENT OF PROFIT OR LOSS for the year ended 31 st march, 2016

Illustration 6 : Mr. Naman Jain started business on january 1, 2015 with a capital of

He immediately bought furniture and fixtures for

STATEMENT OF PROFIT OR LOSS during 2015

Illustration 7 : Mr. A a trader does not keep proper books of accounts. However, A provides the following particular.

6,000 as additional capital and withdraw

4,000 as drawings. He writes off 10% on furniture and 5% on equipment as depreciation. Prepare a statement showing the profit or loss made by him for the year ended 31 st March 2016. 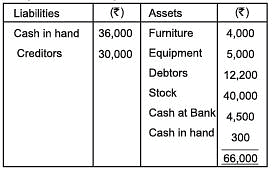 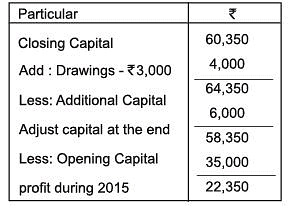 5) Mr. Mehta keeps incomplete records his Assets and liabilities were as under.

6)  Mrs. Pooja started with a capital of

7) Problems based on missing information Fill in the missing figures in the following:

STATEMENT OF PROFIT  for the year ending 31st December 2015 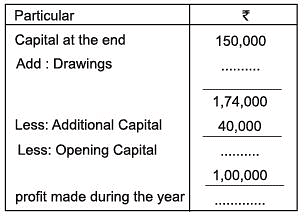 Ans. (Profile during the year