The document Chapter Notes - Building with Bricks Notes | EduRev is a part of the Class 4 Course Mathematics (Maths) for Class 4.
All you need of Class 4 at this link: Class 4

Different type of bricks can be used for different purposes

Some types of bricks are shown in the following picture 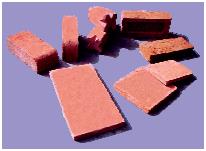 Step-1
Bricks are made by clay and soil dug from the earth by pouring their liquid form in Mold. Step-2
Bricks are then arranged in long lines and kept out to dry. Step-3
The bricks are then kept in big chimneys to make them solid and strong. Jagriti School in Murshidabad (West Bengal) is one of the examples of making school building by bricks.
Masons got this idea after seeing old tomb of Murshid Kuli Khan.It was made three hundred years ago. 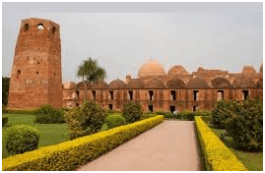 BRICK PATTERNS:
Different type of patterns can be drawn by arranging bricks on floor. The school is proud to have such a beautiful building!
Children play and sing on it and make new patterns themselves. A wall can be made by arranging bricks in different patterns.
Like Munia and Zainab made two different type of walls.
A wall is stronger when bricks are put in cross pattern than a wall made by putting bricks on top of each other.

Jaali Pattern &Arch Design:
A jaali pattern can be drawn by arranging bricks like in the pictures given below. Five types of jaali designs are shown below.

An Arch design can also made by arranging bricks in vertical layout like in a bridge and main door as shown in the pictures below. The jaali of the window is made of thin bricks

MEASUREMENT OF BRICKS:
A brick is measured by its length,width and height. So to get size of any brick you need its length, width and height.