The document Chapter Notes - Traders Kings and Pilgrims Class 6 Notes | EduRev is a part of the Class 6 Course Social Studies (SST) Class 6.
All you need of Class 6 at this link: Class 6

(i) The Iron Age laid roots of a golden period in South India from 300 BC to 300 AD, popularly known as the Sangam Age.

(ii) The rich poetry of this period reflects the glory of Tamil culture and society.

(iii) Tamils had good contacts and trade relations with distant lands like Rome and Cambodia. i)  The word ‘Sangam’ means assembly. The Tamil literature reveals three literary gatherings of poets and scholars around

iii) Of the second assembly, only the Tamil grammar ‘Tolkappiyam’ has survived. The third assembly at Madurai led to the creation of over 2,000 poems together which is called the Sangam Literature.

(i) The Sangam literature mentions three Kingdoms in the Tamilakam territory: The Cheras, the Cholas, and the Pandyas.

ii) The Cheras were Alsop called Keralaputras and traded in spices, cattle, and turmeric.

iii) The Cholas ruled Kaveri delta and even captured parts of Sri Lanka.

iv) The Pandyas centered around Madurai. Madurai was famous for its third Tamil assembly. 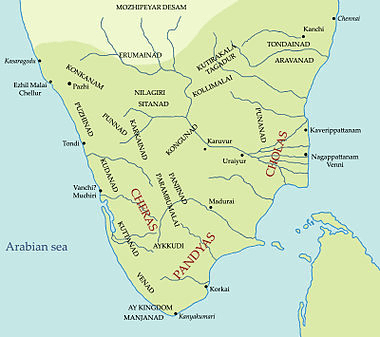 i)  Tamilakam had extensive trade with distant lands.

iii) The Sangam literature uses the word ‘Yavana’ for Greek and Romans.

iv) Historians confirm that Christianity came to South India due to these contacts.

v) Trade route was through North India front Taxila to Pataliputra via Ujjain which linked to Tamralipti seaport.

(vi) The Tamil Kingdom even had trade with South and South-East regions of Ceylon, Malaya, Java, Cambodia, Sumatra, etc.

i) In North-West India, the main conquerors were Sungas, Indo-Greeks, Parthians, Kushanas, and Shakas.

ii) Sungas came in 185BC, after defeating the last Mauryan ruler Brihadratha and captured Magadha. They spread Buddhism.

iii) The Indo-Greeks or Bactrians were from Northern Afghanistan. They captured Punjab.

iv) The Parthians came from Central Asia and established Gandhara as their capital. The Kushanas were nomadic Yueh-chi tribes of North-West China. They defeated the

(v) Indo-Greeks, Parthians and Shakas. Their greatest ruler was Kanishka.

(vi) Shakas came through Hindu-kush mountains and established Ujjain as their capital.

The most famous Shaka ruler was Rudradaman.

(vii) In central India, the Satavahanas were the main rulers. Gautamipurtra, Sri Satkarni was their most important ruler.

(i) Trade flourished during this period. All the kingdoms issued a number of gold, silver and copper coins to promote trade.

(ii) Broach, Sopara and Kalyan were the important port cities.

(iii) The most important reason for development and prosperity during the age was the Silk Route which linked India to Rome via Central Asia.

i) In India, Buddhism and Hinduism were the two main religions.

ii) Buddhism was divided into two cults Hinayana and Mahayana.

iii) Menander, the Indo-Greek king, and Kanishka, the Kushana ruler helped in the promotion of Buddhism.

iv) Bamiyan, one of the tallest statues of Buddha.