(ii) It is also called the golden age of Indian history when rapid development took place in the filed of art, architecture, literature, philosophy, trade, science and agriculture.

(iii) The sources of knowing about Guptas are-archaeological and literary sources.

(iv) Archaeological sources of Guptas include the rock-cut temples of Ajanta, Prayaga Prashasti pillar inscription at Allahabad or by court poet Harisena, etc.

(v) Coins and literary sources from the other source of information. These incljde gold and silver coins issued by Samudragupta and other rulers and accounts of writers like Fa-Xian. Some other sources are the works of Kalidasa, Raguvansha, Meghadoota and Abhijnana Shakuntalam. 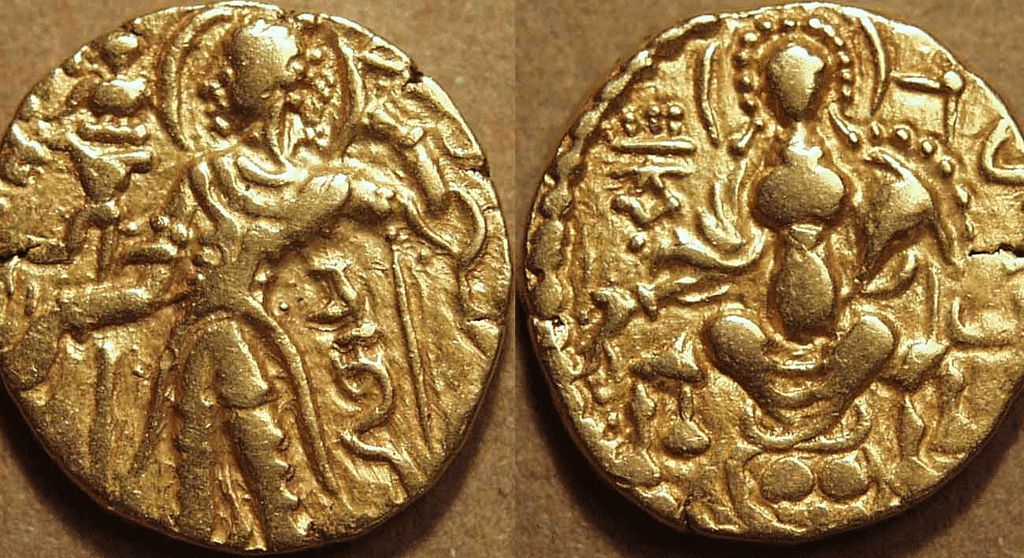 (i) Sri Gupta is supposed to be the founder of the Gupta dynasty.

(ii) The first powerful ruler was Chandragupta I who ascended the throne in 320 AD. His matrimonial alliance with Lichchhavi Princess was a turning point in the history of Gupta empire.

(iii) The next powerful ruler was his son Samudragupta whose glory and conquest is described in the Allahabad pillar inscribed by his court poet, Harisena.

(iv) The next powerful ruler was Chadragupta Vikaramaditya who expanded and strengthened the Gupta empire. He occupied Saka territories Fa-Hien visited India in his rule.

(i)  The central government was headed by a king who was assisted by the ministers.

(ii) The Gupta empire had several Desa or provinces headed by Uparika.

(iii) The lowes level of administration was a district or a group of villages. Each village was headed by Gramadhyksha.

(i) The military system was developed on scientific lives like the Mauryas.

(ii) The Mahasenapatis played an important role in heading the contingents of cavalry and elephants.

i)  The society was divided on the basis of four vamas.

ii)  Butchers and executioners lived in dwellings outside the city.

iii) The brahmans received the gretest respect. The Kshatriyas were also held in high esteem because of the power and prestige they enjoyed.

iv) Slavery was prevalent while joint family system continued to be a feature of Hindu private life.

(i)  The study of science made great progress.

(i) Temples dedicated to Vishnu, Shiva and Paravati were built.

(ii)  Some famous temples include the Dasavtara temple at Jhansi, Vishnu temple at Tigawa, Shiva temple at Bhumara etc. 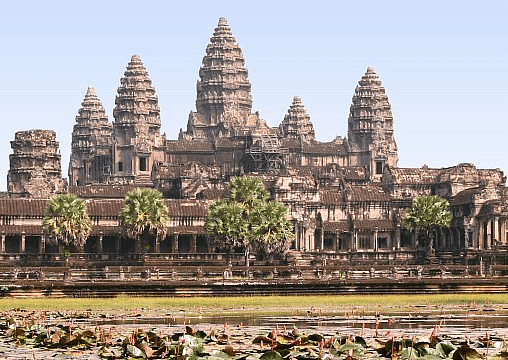 (i) The art of painting reached its height.

(ii) The Buddhist caves in Ajanta and Bagh caves at Gwalior belong to this period and represent the excellent of Indian art.

i) India had brisk trade relations with west through Persian Gulf and Red Sea.

ii) Some famous ports were Kalyani, Broach, Kambay and Tamralipti.

iii) Ship building industry was at its peak.

iv) Buddhism and Hinduism flourished under the Guptas.

v)  Donations were made for maintenance of temples.

vii) After 468AD Gupta empire started declining and collapsed by the middle of 6th century AD.

(i) After the decline of Gupta empire, many small kingdoms arose. One such kingdom was near Thaneshwara ruled by Vardhana dynasty.

ii) The greatest ruler of this dynasty was Harshavardhana.

iv) Harshavardhana had tried to cross river Narmada but was defeated by the Chalukyan king, Pulakeshin II.

(v) He was a follower of Shiva and his administration was efficient.

(i) After the decline of Satavahanas, Chalukyas and Pallavas came into prominence.

(ii)  Chalukyas extended from South of Vindhyas till river Krishna. Their most powerful king was Pulakshin II. They had good trade relations with Arabia, Iran and South-East Asia.

(iii) Far deep in the South was the Kingdom of Pallavas who rule in Kanchi. The greatest ruler was Mahendravarman I.

(iv) The South Indian kingdoms had an efficient administration.

(v) Assemblies were also frequenct in Southern kingdom. These included Ur or a village assembly and nagaram which was an organization of merchants.