The document Chapter Notes - India After Independence Class 8 Notes | EduRev is a part of the Class 8 Course Social Studies (SST) Class 8.
All you need of Class 8 at this link: Class 8

• After Independence, India faced a series of very great challenges.• The problems of refugees and of the princely states had to be addressed immediately.• The new nation had to adopt a political system that would best serve the hopes and expectations of its population.• India’s population in 1947was large and was divided. Division between high castes and low castes, between majority Hindu community and Indians who practiced other faiths could be seen.• Famers and peasants were dependent on the monsoon for their survival. 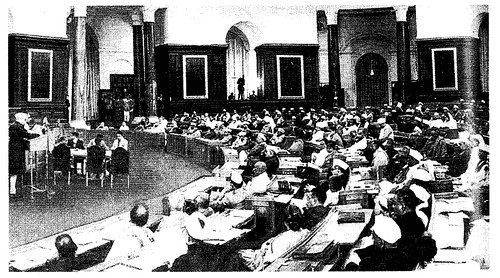 A constitution is Written:

(i) The meetings of ‘Constituent Assembly’ were held in New Delhi and representatives from all parts of India attended the meeting. These discussions resulted in the framing of the Indian Constitution, which came into effect on 26January 1950.ii) One feature of the constitution was its adoption of Universal Adult Franchise. All Indians above the age of 21would be allowed to vote in state and national elections.iii) The constitution guaranteed equality before the law to all citizens, regardless of their caste or religious affiliation. This was Constitution’s second feature.iv) The third feature of the Constitution was that it offered special privileges for the poorest and the most disadvantaged of Indians.v) The practice of untouchability was abolished. The Hindu temples were thrown open to people of all castes.vi) Along with the former Untouchables, the adivasis or Scheduled Tribes were also granted reservation in seats and jobs.vii) The constitution sought to strike a balance of power, between centre and states by providing three lists of subjects which are Union list, State list and Concurrent list.viii) The Union list has subjects like taxes, defence and foreign affairs which are the responsibility of the Centres.ix) The State list has subjects like education and health, which would be taken care of principally by the state.x) The Concurrent list comprises of forests, agriculture, etc. in which the centre and the states would have joint responsibility.xi) Hindi was designated as the ‘Official language’ of India and English would be used in the courts, the services and communications between one state and another.xii) Dr. B.R. Ambedkar, who was the Chairman of the drafting committee and under whose supervision the document was finalized played an important role in framing the Indian Constitution.

How Were States to be Formed:

(i) In 1920s the Indian National Congress amended its constitution and reorganized its regional branches on the basis of linguistic groups.(ii) Prime Minister Nehru and Deputy Prime Minister Vallabhbhai Patel were against the creation of linguistic states.(iii) In October 1952, a veteran Gandhian named Potti Sriramulu went on a hunger strike demanding the formation of Andhra Pradesh to protect the interests of Telegu speaking people.(iv) On 15 December 1952, fifty eight days into his fast, Potti Sriramual died. His death led to violence all over the state and central government was forced to give in to the demand(v) On 1 October 1953, the new state of Andhra Pradesh was created.

(i) Among the major objectives of the new nation, lifting India and Indians out of poverty and building a modern technical and industrial base were very strong.(ii) In 1950, the government set up a Planning Commission to help design and execute suitable policies for economic development. It was agreed that India would follow ‘Mixed Economy’ model where both public and private sectors would co-exist for the economic development of the nation.(iii) In 1956, the second five year plan was formulated which focused mainly on the development of heavy industries in India such as steel, and on the building of large dams.

The Nation, Sixty Year On:(i) On 15August 2007, India celebrated sixty years of its existence as a free nation(ii) In these sixty years India, has seen many achievements as well as failures.(iii) Success during 60 years of India were-India is still a united and a democratic country; There is unity in diversity; There is a free press and an independent judiciary.(iv) Failures during 60 years of India-Deep divisions persist; Despite constitutional guarantees, the untouchables or the Dalits face violence and discrimination; there are Clashes between different religious groups in many states; The gulf between the rich and poor has widened over these years.