The Earth has two types of motions namely, rotation and revolution.

Rotation is the movement of the earth on its axis.

Rotation and revolution of earth

What would happen if the earth did not rotate?

The portion of the earth facing the sun would always experience day, thus bringing continuous warmth to the region. The other half would remain in darkness and be freezing cold all the time. Life would not have been possible in such extreme conditions.

Question for Chapter Notes: Motions of the Earth
Try yourself:Motion of the earth on its axis in about 24 hours is called __________
Explanation

Motion of earth on it's own axis is called Rotation. It takes earth 24 hours i.e one day to complete one rotation.

The second motion of the earth around the sun in its orbit is called revolution. 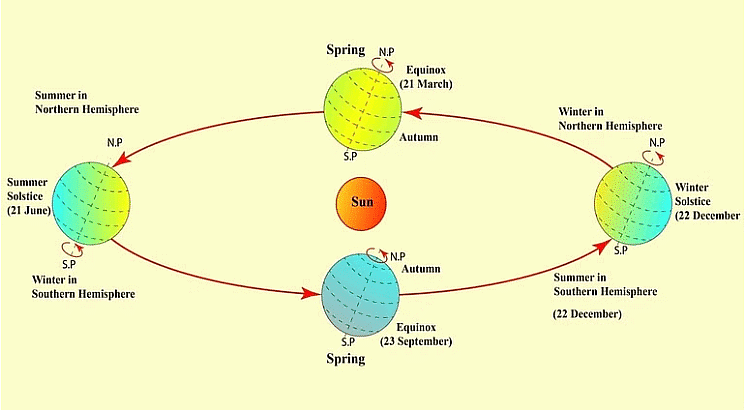 Revolution of Earth and change of seasons

Leap YearSummer and Winter Solstice
Question for Chapter Notes: Motions of the Earth
Try yourself:Why do seasons change on the earth?
Explanation

Earth moves around the sun in an elliptical (elongated circle) orbit that requires about 365 1/4 days to complete. The earth's spin axis is tilted with respect to its orbital plane. This is what causes the seasons.

Revolution: Movement of the earth around the Sun on a fixed path or orbit is called revolution.