The document Chapter Notes: Weather, Climate & Adaptations of Animal Notes | Study Science Class 7 - Class 7 is a part of the Class 7 Course Science Class 7.
All you need of Class 7 at this link: Class 7

The day-to-day conditions of the atmosphere at a place with respect to elements like temperature, humidity, rainfall, wind speed, etc. is called the weather of that place.

The atmosphere is all around us - we cannot see it, but it keeps us warm. Without it, the earth would be a lifeless ice ball. In addition, the atmosphere absorbs or deflects incoming ultraviolet rays and other charged particles. The temperature is low early in the morning, and increases by noon. It decreases again towards the evening, and the cycle continues. 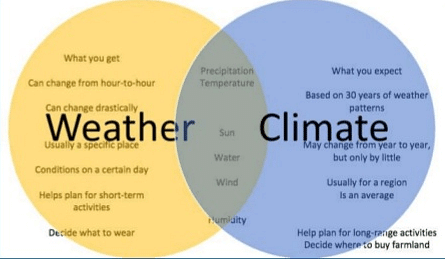 Fig: Relation between weather and climate

Similarly, rain, snow, thunder and lightning are constituents of weather. Sometimes, the weather is violent, and sometimes, peaceful and quiet.

The mean temperature for a given month is found in two steps:

Mean temperature helps compare the weather at two different places. E.g., if we compare the temperatures of Thiruvananthapuram in Kerala and Srinagar in Jammu and Kashmir, we can conclude that Thiruvananthapuram is very hot and wet than Srinagar, which is moderately hot and wet for some parts of the year.Let's consider another place like Rajasthan, which has high temperatures during most parts of the year, but very low temperatures in winter, which lasts for a few months. The region receives scanty rainfall. Therefore, it is known as typical desert climate.North-eastern India receives rain for a major part of the year. Hence, we can say that the climate of the region is wet. 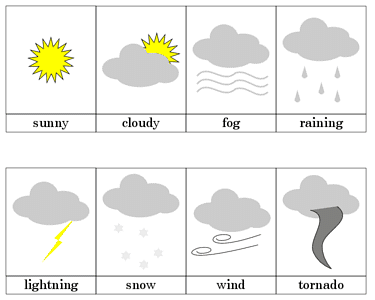 Different parts of the earth have different types of climate. The sun is responsible for this difference in climatic conditions.

Five major types of climates are recognised, based on the annual and monthly averages of temperature and precipitation.Moist Tropical Climates: They are known for their high temperatures and large amount of rain around the year.

Dry Climates: They are characterised by little rain and a high daily temperature range.

Continental Climate: It is characterised by winter temperatures low enough to support a fixed period of snow cover every year, a relatively moderate precipitation occurring mostly in summer, and an even distribution of precipitation.

Polar areas having cold climates: They are covered by ice almost all the year round. Most areas are covered by glaciers or by a semi-permanent layer of ice. 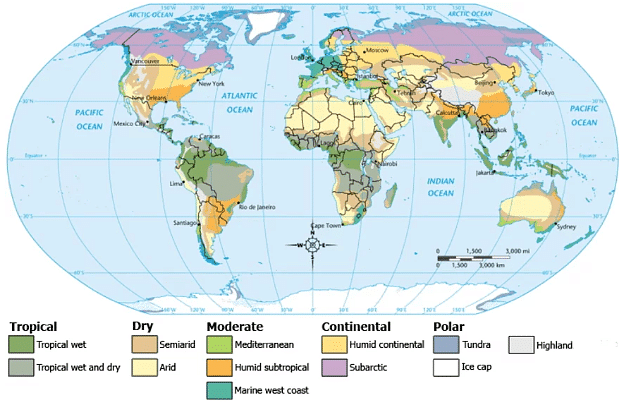 Climate has an intense effect on all living organisms. Animals adapt themselves to survive various conditions in which they live. Animals that live in extreme climates acquire some special features to protect themselves from it. Some of them are as follows:

The camel has a hump to store food in the form of fat, and hooves to tread on the desert sand with ease.

The temperature in the polar areas may go down to minus 37 degrees centigrade during winters, so animals like polar bears, penguins, many types of fish, musk oxen, reindeer, foxes, seals, whales and birds are found in the polar regions.

Polar bears, for example, protect themselves with the thick fur on their bodies. They have two layers of fur for protection from the extreme climate. They also have a layer of fat under the skin, and are very well insulated. In fact, they often take rest to avoid getting overheated.

The polar bear often goes for a swim to cool off on warm days. Its wide and large paws are useful for swimming as well as for walking on the snow.

The bodies of penguins are white, and merge into the background. They have a thick layer of skin and move around in groups to keep warm. Their streamlined bodies and webbed feet make penguins swift swimmers.

Water retains its warmth under the icy layer. Fish go deeper in the water to stay warm. Birds have to stay warm to survive. Hence, at the onset of winter, these birds migrate to warmer areas. They come back again in the summer. E.g. Siberian cranes migrate to far-off places like Bharatpur in Rajasthan, Sultanpur in Haryana and also to some wetlands of north-eastern India. They fly here all the way from Siberia.Birds travel thousands of kilometres to migrate. During the day, the sun guides them, and the stars do so in the night.

Animals adapt themselves to hot climate in the tropical regions, where the average temperature is higher than 15 degrees centigrade.At the peak of summer, the temperature may cross 40 degrees centigrade. Throughout the year, day and night are equal in duration. These regions receive abundant rainfall. A significant feature about this region is the tropical forest.A wide variety of plants and animals are found in these regions due to the continuous warmth and rain. The major types of animals living in this type of rainforests are monkeys, apes, gorillas, lions, tigers, elephants, leopards, lizards, snakes, birds and insects.

Most tropical animals have sensitive hearing, sharp eyesight and thick skin. They also have skin colour that helps them to disguise and protect themselves from predators.

E.g. The toucan has a long, large beak. This helps it reach the fruits on branches that are otherwise too weak to support its weight.

The elephant has such large ears and tusks. The tusks are modified teeth and are used to tear the bark of trees for food. The large ears help it hear even very soft sounds. They also keep it cool in this hot and humid climate.

The document Chapter Notes: Weather, Climate & Adaptations of Animal Notes | Study Science Class 7 - Class 7 is a part of the Class 7 Course Science Class 7.
All you need of Class 7 at this link: Class 7