(i) India is situated in the northern hemisphere.

(ii) The Tropic of Cancer (23°30'N) passes almost halfway through the country.

(v) The local time changes by four minutes for every one degree of longitudes. The sun rises two hours earlier in the east (Arunachal Pradesh) then in the west (Gujarat).

(vi) The local time of longitude of 82°30'E has been taken as the Indian Standard time.

(i) India shares its border with seven countries-Pakistan, China, Nepal, Bhutan, Bangladesh, Sri Lanka and Maldives. Sri Lanka is separated from India by the Palk Strait.

(ii) India is a vast country. For administrative purpose, the country is divided into 28 states and 7 Union Territories. New Delhi is the capital. 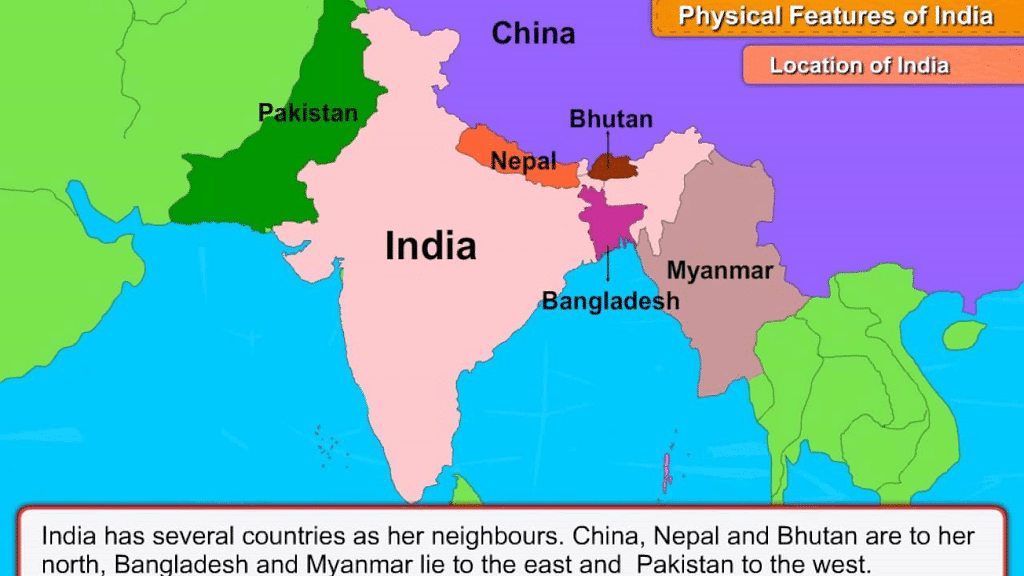 (i) India is marked by a diversity of physical features such as mountains, plateaus, plains, coasts and islands.

ii) In the north are the Himalayas meaning the ‘abode of snow’.

iii) The Himalayas are divided into three main parallel ranges-Great Himalayas or Himadri, the Middle Himalaya or Himachal and the Shiwalik.

iv) The Northern Indian Plains lie to the south of the Himalayas. They have alluvial deposits made by the Indus, the Ganga, the Brahmaputra and their tributaries.

v) In the western part of India is the Great Indian Desert.

vi) To the South of Northern Plains lies the Peninsular Plateau. It has the Aravalis, the Vindhyas, the Satpuras, the Narmada, the Tapi, the Western Ghats and the Eastern Ghats.

viii) The Sunderban delta is formed where the Ganga and Brahamaputra flow into the Bay of Bengal.

ix) Two group of Islands also form part of India. One is the Lakshadweep Island in the Arabian sea and the Andaman and Nicobar Islands in the Bay of Bengal.