The document Chapter Notes - Life in the Temperate Grasslands Class 7 Notes | EduRev is a part of the Class 7 Course Social Studies (SST) Class 7.
All you need of Class 7 at this link: Class 7

• Grassland is a region where grasses from the dominant type of plant life.

• Depending upon the climate conditions, grasslands can be divided into two categories, the temperate grasslands and the tropical grasslands.

(i) The temperate grasslands of North-America are known as the Prairies.

(ii) For the most part, Prairies are tree-less but, near the low-lying areas woodlands can be found. The prairies are bound by the Rocky Mountains in the West and the Great Lakes in the East.

(i) Climate is of continental type with extreme temperature.

(ii) The annual rainfall is moderate and is ideal for the grown of grass.

(i) Prairies are practically tree-less but the places where water is available, trees such as willows, alders and poplars grow.

(ii) Places that receive rainfall of over 50 cm, are suitable for farming as the soil is fertile.

(iv) Bison or the American buffalo is the most important animal. i) The temperate grasslands of South Africa are called the velds.

ii) Velds are rolling plateaus with varying heights ranging from 600 m to 1100 m.

iii) It is bound by the Drakensburg Mountains on the east.

i) The velds have a mild climate due to the influence of the Indian Oceans.

(ii) Winters are cold and dry. Temperature varies between 5°C and 10°C and July is the coldest month.

(iii) The velds receive rainfall mainly in the summer months from November to February.

i) Vegetation cover is sparse. 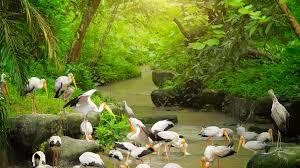 i) Velds are known for cattle rearing and mining.

iii) The velds have rich reserve of minerals.

iv) Iron and steel industry has developed where coal and iron present.

v) Johannesburg is known as the gold capital of the world.