The document Chapter Notes - Consumer's Equilibrium and Demand, Class 12, Economics | EduRev Notes is a part of the Commerce Course Economics Class 11.
All you need of Commerce at this link: Commerce

CONSUMER :: Consumer is an economic agent who consumes goods and services for DIRECT SATISFACTION OF HIS / HER WANTS

UTILITY :: It refers to want - satisfying power of a commodity. Thus is refers to satisfaction derived from the consumption of a commodity.Example - A bread has the power to satisfy hunger , books fulfil our desire for knowledge

(2) UTILITY IS SUBJECTIVE as it varies from person to person , time to time &  place to place

(3) SATISFACTION NEED NOT NOT INVOLVE ACTUAL PLEASUE E.G treatment of broken legs only gives satisfaction to the patient but doesnot provide him any pleasure

(4) Utility can be expressed in two different ways namely :

CARDINAL UTILITY : It is given by Marshal .It states that utility can be measured and compared  in numerical terms like 50, 40, 30.Thus the consumer can assign utils to the commodities, like  20 utils to apple and 15 utils to banana

ORDINAL UTILITY :: Given by Hicks and Allen. It states utility cannot be measured in numerical terms but only can be expressed in preference terms. Thus if the consumer likes apple more than banana, then he will give 1st rank to apple and 2nd rank to banana.

(1) TU INCREASES AT DIMINISHING RATE WHEN MU IS DECREASING BUT POSITIVE.The shaded area under TU curve show the positive but diminishing (size of area is decreasing) marginal utility upto the 5th unit.

(2) TU IS MAXIMUM WHEN MU = ZERO. It means that consumer doesnot have more desire for commodity and this situation is known as SATURATION POINT (6th unit) 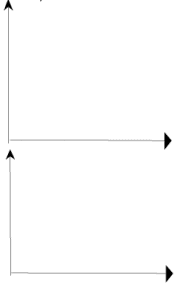 This law states as the consumer has more and more standard units of a commodity are continuously consumed, marginal utility derived from every additional unit must decline.→ This law also states that after a certain level MU can be negative due to unpleasantexperience or dissatisfaction.

FOR EXAMPLE on a hot summer day, when a person is very thirsty, he gets maximum satisfaction when he drinks the first glass of water as his intensity of thirst is at its highest. The second glass of water will give him less utility as intensity of thirst is reduced. The utility from third glass will still be less.After he gets fully satiated , any further consumption may cause disutility.

This is very natural and it happens in respect of all goods and services. It is ,therefore, called as “FUNDAMENTAL LAW OF SATISFACTION” or “ Fundamental Psychological Law”

BASIC ASSUMPTIONS(1) Commodity is consumed in some STANDARD UNITS such as a cup of tea, a glass of water and NOT A SPOON OF TEA OR WATER

(2) There is a CONTINUOUS CONSUMPTION of the commodity as second glass of water after two hour may give less , equal or more utility

(3) QUALITY OF COMMODITY SHOULD NOT CHANGE as a refrigerated cold second glass of water will give more utility .IN OTHER WORDS GOODS CONSUMED SHOULD BE HOMOGENEOUS (similar units)

(4) Consumer must behave in a RATIONAL MANNER

MEANING :: Consumer’s equilibrium refers to a situation where in a consumer gets MAXIMUM SATISFACTION OUT OF HIS GIVEN INCOME and he has no tendency to make any change in his existing expenditure.

⇒ In other words a consumer is in equilibrium when , given his income and market prices, heplans his expenditure (on different goods and services) in such a manner that he maximises his total satisfaction

CONDITION :: Consumer equilibrium in case of single commodity is attained when Marginal Utility  in terms of price of the commodity is equal to its Marginal utility of Money

Assuming Marginal worth of money to be one util (1 Rs = 1 util) , the equation changes to

In case LESS THAN EQUILIBRIUM QUANTITY IS CONSUMED {LET SAY 2 UNITSOF “X”} , then it would be situation of MUx >  Px   or MUx / Px  >  MUM which indicates utility derived is greater than what consumer is ready to pay and hence SITUATION OF CONSUMER SURPLUS arises. THUS CONSUMER WILL INCREASE HIS CONSUMPTION

As the consumer will buy more of X good , his additional utility (MUx) will Decrease due to operation of law of DMU . This process will continue until consumer gets into equilibrium situation that is

⇒ In case MORE THAN EQUILIBRIUM QUANTITY IS CONSUMED {LET SAY 4 UNITSOF “X”} - MUx / Px  <  MUM which indicates utility derived is less than what consumer is ready to pay and hence situation of CONSUMER DEFICIT ARISES. Thus consumer will DECREASE HIS CONSUMPTION

As the consumer will buy less of X good, his additional utility (MUx) will increase due to operation of law of DMU. This process will continue until consumer gets into equilibrium situation that is

(1) It is assumed that the CONSUMER IS RATIONAL that is he aims at maximising the utility from his purchases(2) Utility can be measured in CARDINAL NUMBERS like 1, 2,3 and 4 . Thus it is Based on Cardinal utility approach(3) Marginal Utility of Money is constant (4) The Law of diminishing marginal utility operates (5) Consumer’s income is given and remains constant (6) INDEPENDENT UTILITY which means utility of commodity is not affected by consumption of other goods.

In this case consumer buy two commodities - ‘X’ and ‘Y’ with his given money income.In case of one commodity say “Good X” , a Consumer strike equilibrium when

⇒ Similarly for “Good Y “, a consumer will strike equilibrium when

Relating equation for “X” and “Y” commodity , that is when consumer buys two goods , the equilibrium is achieved when

Thus for any set of two goods , a consumer strikes his equilibrium when he shall DISTRIBUTE OR ALLOCATE HIS MONEY INCOME between Good “X” and Good “Y” such that the RATIOS OF MARGINAL UTILITIES FROM GOODS IS EQUAL TO RATIO OF PRICE OF GOODS.Therefore this law is also known as LAW OF EQUI - MARGINAL UTILITY

Consumer equilibrium or level of maximum satisfaction is achieved at 3 units of X good and 4 units of Y good. Total expenditure at this level would be would be