The document Chapter Notes - Financial Statements of Sole Proprietorship Commerce Notes | EduRev is a part of the Commerce Course Accountancy Class 11.
All you need of Commerce at this link: Commerce

Meaning of Balance Sheet Balance sheet is a summarised statement of assets and liabilities, prepared generally at the end of financial year to show the financial position of the business. All liabilities are put on the left hand side of balance sheet where all assets are shown on its right hand side.

GROUPING AND MARSHALLING OF ASSETS AND LIABILITIES

Grouping : The term 'Grouping' means putting together items of a similar nature under a common heading. For example, under the heading 'trade creditors, the balances of the ledger accounts of all the suppliers from whom goods have been purchased on credit, will be shown.

A general format of a Balance Sheet in order of liquidity is shown below:

Order of Permanence : This order is exactly reverse of the liquidity order.

2. The least urgent payment to be made (e.g., short-term creditors) is shown last.

3. A company is required to prepare the balance sheet in order of performance.

Illustration 12 From the following Trial Balance of Shri Hemant Babu prepare Trading and Profit and Loss A/C for the year ending 31st March 2016 and Balance Sheet as on that date. The Closing Stock on 31st March 2016 was valued at 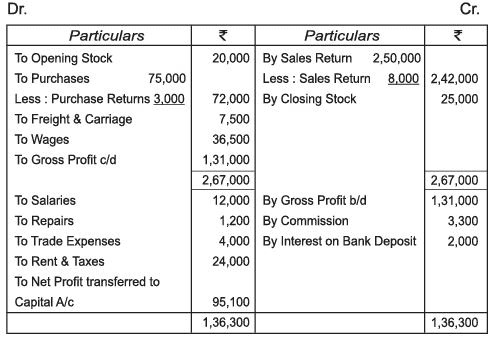 Adjustment in preparation of financial statement of Soleproprietor

Meaning of Adjustment entries : Those entries which need to be passed at the end of the accounting year to show the accurate profit or loss and fairfinancial position of the business.Need of Adjustment: There are number of transactions that may not find the place in the Trial Balance due to any reason such as Closing Stock (because it is valued at the end of the year), Manager's Commission based on Net profits (because its calculation requires preparation of Income Statement first). These transactions can only be taken into account by passing Adjustment entries so that their impact on the profitability and financial position can be shown.Closing Stock : The closing stock represents the cost of unsold goods lying in the stores at the end of the accounting period.Outstanding Expenses : When expenses of an accounting period remain unpaid at the end of an accounting period, they are termed as outstanding expenses.As they relate to the earning of revenue during the current accounting year, it is logical that they should be duly charged against the revenue for computation of the correct amount of profit or loss.Prepaid Expenses : At the end of the accounting year, it is found that the benefits of some expenses have not yet been fully received; a portion of its benefit would be received in the next accounting year. This portion of expenses, is carried forward to the next year and is termed as prepaid expenses.Accrued Income : It may sometime happen that certain items of income such as a interest on loan, commission, rent, etc. are earned during the current accounting year but have not been actually received by the end of the same year. Such incomes are known as accrued income.Income Received in Advance : Sometimes, a certain income is received but the whole amount of it does not belong to the current period. The portion of the income which belongs to the next accounting period is termed as income received in advance or an Unearned Income.Depreciation : It is the decline in the value of assets on account of wear and tear and passage of time. It is treated as a business expense and is debited to profit and loss account.This, in effect, amounts to writing-off a portion of the cost of an asset which has been used in the business for the purpose of earning profits.

The following were the balances extracted from the books of Roshan as on March 13,2016

Taking into account the following adjustments, prepare Trading and Profit and Loss account and Balance Sheet as on March 31,2016:

c) Salaries for the month of March, 2016 amounting to

d) Insurance includes a premium of

Books of Roshan Trading and Profit and Loss Account for the year ended March 31, 2016 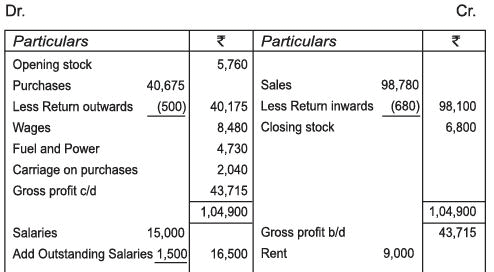 Bad Debts : The debtors from whom amounts cannot be recovered are treated in the books of accounts as bad and are termed as bad debts.Further Bad Debts : These Bad debts is a loss that occurred after preparation of Trial Balance. Further bad debts be added in the bad debts already appearing in the Profit and Loss A/c and Debtors would be reduced with the same amount.Provision for Bad Debts : In the balance sheet, debtors appears on the assets side of the Balance Sheet, which is their estimated realisable value during next year. It is quite possible that the whole of the amount may not be realized in future. However, it is not possible to accurately know the amount of such bad debts.Hence, a reasonable estimate of such loss is provided in the book. Such provision is called provision forbad debts. Provision for doubtful debts is shown as a deduction from the debtors on the asset side of the balance sheet.Note : The provision for doubtful debts brought forward from the previous year is called the opening provision or old provision. When such a provision already exists, the loss due to bad debts during the current year are adjusted against the same and while making provision for doubtful debts required at the end of the current year is called new provision. The balance of old provision as given in trial balance should also be taken into account.Provision for discount on Debtors : Discount is allowed to customers to encourage them to make prompt payment. The discount likely to be allowed to customers in an accounting year can be estimated and provided for by creating a provision for Discount on debtors.Provision for discount on debtors is made on good debtors which are arrived at by deducting further bad debts and provision for bad debts out of Debtors shown in the Balance sheet. 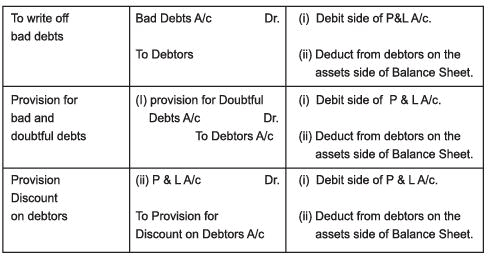 *Only relevant items in debit side of P&L A/C

The following balances were extracted from the books of Shri Himanshu Traders on March 31,2016

Prepare the trading and profit and loss account and a balance sheet as on March 31,2016 after keeping in view the following adjustments: i) Depreciate old building by

625 and addition to building at 2% and office furniture at 5%. ii) Write-off further Bad Debts

Books of Himanshu Traders Trading and Profit & Loss Account for the year ended on March 31, 2016 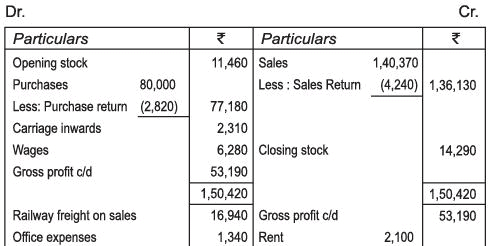 1. Commission on net profits before charging such commissionCommission =

2. Commission on net profits after charging such commission 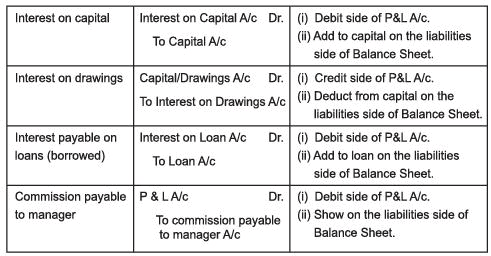 ADJUSTMENT IN RESPECT OF GOODS

Abnormal Loss : Sometimes losses occur due to some abnormal circumstances such as accident, fire, flood, earthquakes etc. Such losses are called Abnormal losses. These may be divided into two categories(A) Loss of Goods(B) Loss of fixed assetsGood taken for personal use (Drawings in goods) : When the goods are withdrawn by proprietor for personal use the cost of such goods deduct from purchases and the amount should be deduct from capital in Balance Sheet.Goods distributed as free samples : Sometime goods are distributed as free sample by the businessman for the purpose of advertisement. The cost of free sample deduct from purchase and shown in Debit side of profit and loss account.Adjustment Entry in respect of goods

1. If closing stock shown in Trial Balance then it will be shown in balance sheet only. It is assumed that purchases amount already get adjusted in trial balance.

4. Any expenses related to factory are debited to trading account like factory lighting, factory rent if factory word is not given then lighting and rent will be debited to profit and loss account.

7. Packing : The packing refers to the big containers that are used for transporting the goods and regarded as indirect expenses and debited to profit and loss account.

Remember : While preparing Final Account the items which are given inside the Trial Balance are written only once either in Income Statement or in the Balance Sheet. (Assuming that they have been already adjusted in the respective account). On the other hand, the items which are given outside the Trial Balance (known as adjustment) are to be written twice because the double entry in respect of all adjustments is to be completed in the final accounts itself. 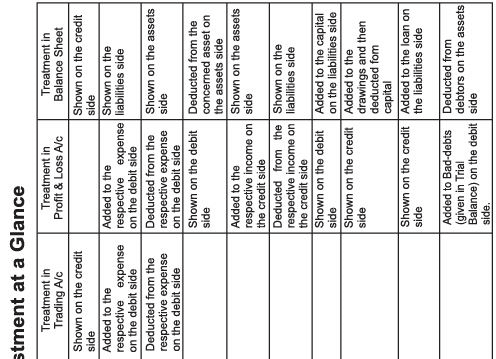 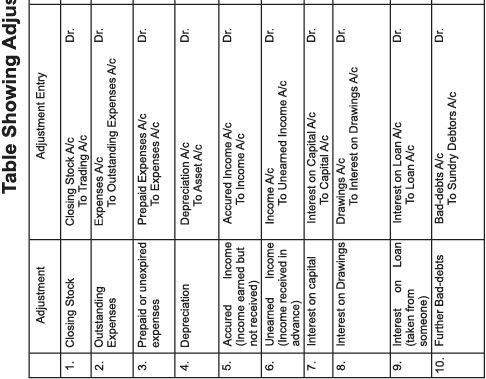 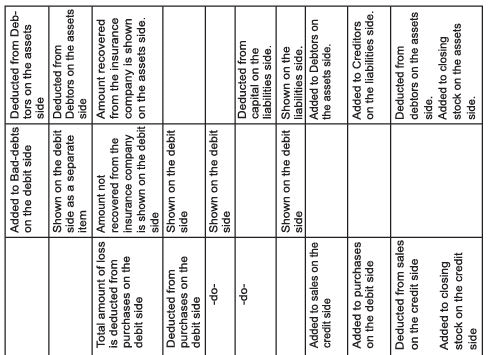 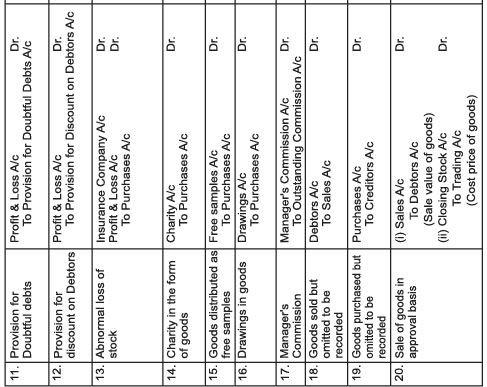 Prepare(i) Trading and Profit and Loss Account for the year ended 31st March, 2016 and(ii) Balance Sheet as at that date, taking into consideration the adjustments given below:

Adjustments: (i) Closing stock was valued at

12,000.(ii) Half of wages are in respect of work to be done in next year.(iii) Depreciate Motor Vehicles and Plant and Machinery @ 10% p.a.(iv) Depreciate computers Notes i) Sales Tax collected is a receipt collected on behalf of the Government and should be shown on the liabilities side of the balance sheet, till it is paid off to the Government.ii) Income Taxto betaken asdrawings.

Illustration 17 From the following balances of Mr. Ashok. You are required to prepare trading and profit and loss account and a balance sheet on March 31,2015. 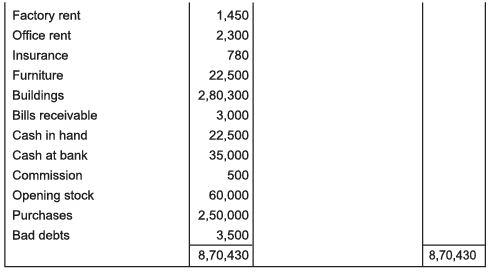 1,000 were used by proprietor.Solution Books of Mr. Ashok Trading and Profit and Loss Account for the year ended March 31, 2015 Illustration 18 From the following Adjustments and with the help of Trial Balance prepare a Trading A/c Profit and Loss A/c and Balance sheet as on 31st Dec. 2015. 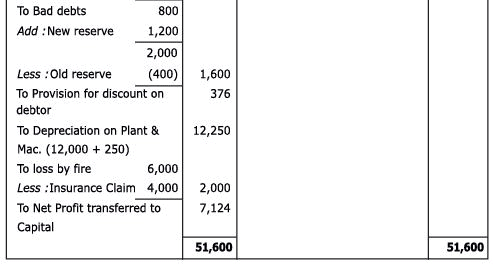