What is a Fraction?

A fraction is a part of a whole. If a whole is divided into equal parts, each part is called a fraction. It is made up of two parts.

Fractions can be used to

Representation of a Fraction on a Number Line

The fraction 3 / 8 is shown on the number line as:

Method 1: Pictorially, it can be shown as:

It can also be represented on the number line as:

as an improper fraction.

Pictorially, it can be shown as:

Multiply the whole number part by the denominator and add numerator to the product.Alternatively,

Consider the following fraction bars.Fractions that name the same part of the whole are called equivalent fractions.

Thus, to find equivalent fractions, we either multiply or divide the numerator and denominator by the same number.

Example 3: Fill in the missing numbers.

Writing a Fraction in its Simplest Form

A fraction is in its simplest form when its numerator and denominator have no common factors other than 1.

(a) Divide both numerator and denominator by a common factor.

Example 5: For a singing competition, 6 / 15 of the children are girls and 9 / 15 are boys. Whose number is greater in the competition, of boys or of girls?

To answer this question we have to compare 6 / 15 and 9 / 15. We can use two ways for comparing them and then state a general rule.Method 1: Comparing Pictorially

3. By Finding Equivalent Fractions Using LCMTo compare 1 / 3 and 2 / 5, we convert them into equivalent fractions both having the same denominator.The common denominator in this case will be taken as the LCM of 3 and 5.LCM of 3 and 5 = 3 × 5 = 15.

Edurev Tips: This is the most commonly used method for comparing and ordering unlike fractions.

Now that you know how to compare fractions, you can order them in any order— increasing or decreasing.

Arranging the fractions in increasing order,

You can write the same fractions in decreasing order as

It can be clearly seen that

Thus, if the numerator is the same, the fraction with the least denominator is the greatest.

Addition and Subtraction of Fractions

1. To Add or Subtract Like Fractions (Fractions with the Same Denominator)

Therefore, 3 / 4 part of the wall was painted by Ravi and Nisha.

What is meant by least common denominator?Study the two rows of fractions given below:

Method 2: You may also set your work as under:

Type I: With Same Denominators

Example 11: When released, a gas balloon first rose by

and then again by

What is the total height to which the gas balloon rose?

Pictorially, the problem can be represented as:

Thus, we can add mixed numbers by first adding whole numbers and then proper fractions. Therefore, the above work can be set as:

litres of milk in the morning and

litres in the evening. Find the total quantity of the milk given by the cow.

Method 2Total quantity of milk given by the cow

∴ So, the cow gave

litres of milk in all.

By changing into improper fractions 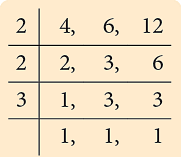 Edurev Tips: Method 1 is particularly useful when the whole number parts of given fraction are large numbers such as in

Example 17: Mira is preparing a sweet dish. She used 5 / 8 litre of milk from a jug containing 1 litre milk. How much milk is left in the jug?

Quantity of milk remaining in jug

Example 18: David lives 3 kilometres away from a town. Paul lives 56 of a kilometre away from the town. How much closer does Paul live to the town than David?

km closer to the town as compared to David.Method 2Paul lives

km closer to the town as compared to David.

where whole number parts are large numbers, it may be easier and more convenient to apply method 1.Thus,

Properties of Addition of Fractions

Problems Based on Real Life Situations

of milk for the kheer.

of a ribbon. She used

of the ribbon to wrap some gifts. How much ribbon is left with her?

of ribbon left with her.