There were some great philosophers who were born in the world. They are the people who changed our direction of thinking. Let us know about some of them.

Socrates lived in Greece about 2400 years ago. He was a 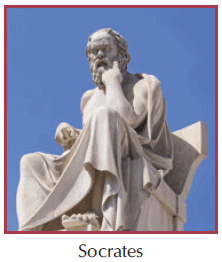 He taught his disciples that wisdom and honesty are more important than riches or fame. His guiding principle was ‘Know yourself.’

The young men of his time were eager to learn from him.

Socrates did not write down his teachings in any book. He only talked to young men wherever he met them. He would set them to think about what was good in life. He would ask them to give their opinions on a subject. Often, he found people had no good reason for their opinions. Then, he would ask them some questions. Thus, through questioning and reasoning, they all tried to find the true answer. Socrates called it the only way to reach the truth.

People called Socrates the wisest man in Greece. However, Socrates was astonished at this. He said that he asked questions because he himself did not know the true answers. He talked to many men who were known to be wise. But, he discovered that they only pretended to be wise.

Socrates made many enemies because he challenged what they thought and said. Some of them brought him to trial in court. They accused him of being disrespectful to the gods. They also said that he was misguiding the youth with his ideas. The judges asked Socrates to stop his teachings. But, he did not promise to do so. He said that he had done what was good for the people. This made the judges angry. Socrates was condemned to death by poison. Socrates drank the poison very calmly. While waiting for the poison to take effect, he kept talking to his followers. He talked about life after death.

Socrates had a large number of followers. The most important of them was Plato. He put down the teachings of Socrates in the form of a book called the Dialogues. His main teachings were:

Abraham Lincoln was born in 1809 in the United States of America. His father was a farmer. His mother died when he was just nine years old. However, he had a happy childhood

on his father’s farm. He did not attend regular school. But, he learnt to read and write himself. He studied law on his own and became a lawyer. Later, he was drawn into politics and in 1856, he joined the anti-slavery Republican Party. In 1860, he was elected as the President of his country. At that time, there was a great unrest in the country over the question of slavery. Coloured people from Africa were brought and sold in the market like cattles. They had no rights. He wondered how one man could be the slave of another man. But, people of the southern states wanted to continue with slavery. A Civil War broke out in the country. Lincoln won the civil war. Thus, he kept the country united. All the slaves were freed.

In 1865, Lincoln was elected the President for the second time. He declared a policy of peace. He wanted to unite the nation after the Civil War. But on April 14, 1865, before he took the charge of his own office, he was shot dead in a theatre. He will be remembered forever as the man who laid down his life for the sake of equality and liberty.

Karl Marx was a German economist. He was a great political thinker and a revolutionary. He was one of the chief founders of what we call communism. In 1842, Marx became the editor of a newspaper. He started writing articles on the country’s economic and social problems. The paper was soon banned. Marx wrote a book called Das Capital. In this book he expressed his views very clearly and boldly.

The Industrial Revolution in Europe had made the rich richer and the poor poorer. The industrialists were always after bigger profits. They tried to pay the labourers as little as possible. Thus, there arose two classes of people – the capitalists and the workers. The capitalists rolled in wealth, while the poor workers lived in very miserable conditions. Some great thinkers of the time were upset to see this injustice and they revolted against it. Karl Marx was the first among them.  Marx believed that capitalists always try to suppress the workers. He also thought that workers would one day rise against the capitalists and take control. Marx’s ideas later inspired Communist revolutions all over the world. His ideas serves as a warning to the rich not to ill-treat the poor. 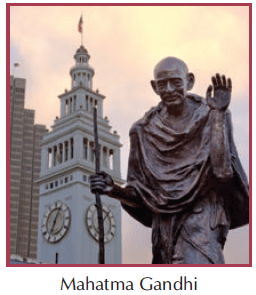 Karamchand Gandhi. He was called a Mahatma because

of his kind nature and simple life. He was born on 2nd of October, 1869 at Porbandar in Gujarat. He studied law in London and became a barrister. He started his practice in Mumbai. When he went to South Africa for a case, he saw that Indians and Black Africans were treated very badly by the white rulers. To fight against the injustice, Mahatma Gandhi stayed in South Africa for 21 years. He called his fight Satyagraha, which means insistence on truth.

He was imprisoned many times but he continued his satyagraha. He was able to win many rights for his people.

Mahatma Gandhi came back to India in 1914. He was very sad to see the poor condition of Indians under the British rule. He asked the people to rise against the injustice that was being done to them. People treated him like a saint. They flocked around him in large numbers. They would do anything at his bidding.

But, he always advised his people to remain peaceful and non-violent. Many of them were killed due to ill treatment at the hands of British. Others were put in jail. But the people always remained peaceful. Mahatma Gandhi too, was arrested and jailed several times.

Truth and non-violence were the only weapons used by Mahatma Gandhi. These weapons proved more powerful than the lathis and guns of the British government. At last, the British rulers had to give in. They had to leave India. The country became free on August 15, 1947. We now call Mahatma Gandhi ‘the Father of the Nation’. He fought not only against the British rule but also against many social evils. He fought against the social evils of untouchability.

He worked for the upliftment of women. Though he was a Hindu, he loved all religions equally. He asked people to give up their narrow ideas. He said that all men are children of the same God.

Mahatma Gandhi showed the world the path of truth, love, peace and non-violence. People like him are remembered even after their death.

Martin Luther King was an American. He was highly educated and did the job of a clergyman. But he had to face

humiliation because he was coloured. He was shocked to see this. He decided to fight for the rights of the coloured in his country.

Slavery had been abolished in America long ago. But the coloured were still treated very badly. There were many places where the coloured were not even allowed to enter. They could not claim a seat in the bus or train until all the whites had got their seats.

Martin Luther King strongly opposed such injustice. He decided to complete the work started by Abraham Lincoln. He travelled throughout the United States of America and gave inspiring lectures. He led many peaceful demonstrations. He was arrested many a times. Even his life was threatened. But, like Gandhiji, he always asked his followers to remain non-violent. In 1964, he was awarded the Nobel Prize for peace.

King gave his prize money to the Civil Rights Movement.

However, there were many who did not like King’s ideas. One such person became enraged. He shot King dead on April 4, 1968. King was only 39 years old when he died.

Martin Luther King had once visited India. He had said ”I am not a tourist here. I have come on a pilgrimage to pay homage to the land of Mahatma Gandhi.”

Philosopher: a person engaged or learned in philosophy, especially as an academic discipline.

Liberty: the state of being free.

Capitalists: a person who has lot of money, property, etc, and who uses these things to produce more money.

Satyagraha: the form of non-violent resistance initiated in India by Mahatma Gandhi.