India’s struggle for freedom is a story of courage and sacrifice. But, India’s freedom struggle was not organised. The Indian freedom struggle took a definite shape after Mohandas Karamchand Gandhi entered the political scene.

Mahatma Gandhi studied law in England and went to South Africa to practice it. There, he observed and experienced racial discrimination. He raised his voice against this injustice and demanded equality. His struggles eventually bore fruit, when the British were forced to concede to his demands of racial equality.

Mahatma Gandhi came to India in 1915. He visited every part of the country to understand the problems faced by the people and the condition of the Indian society. He was shocked to see that Indians were treated unequally in their own country. Social evils like the caste system kept people divided and backward. People of deprived sections were treated unjustly. He decided to unite the people and encourage everyone to take an active part in the Indian freedom struggle.

The year 1915 was a turning point in India’s struggle for freedom. He founded the 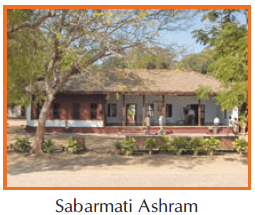 (handmade cloth) and the charkha (spinning wheel). He worked for the upliftment of the untouchables,  whom he called ‘harijans’ or the children of God. He promoted Hindu-Muslim unity, opposed alcoholism and was strictly against the exploitation of women. He was also an ambassador of animal welfare, as he was strictly against cow slaughter. 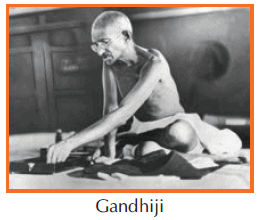 The word Satyagraha is actually made up of two words, satya and agrah. Satya means truth and agrah means

to insist on. Together, they mean insistence on right demands of the people. He had a firm belief in the two most powerful tools – satya (truth) and ahimsa (nonviolence), with which he forced the British to leave India.

Mahatma Gandhi entered active politics with the Champaran campaign to redress the grievances of the indigo cultivators, oppressed by the planters of Bihar. The Champaran Satyagraha was his first Civil Disobedience Movement in India. Indigo planters were facing problems with the Tinkathiya system. According to this system, planters were forced by the British to plant indigo on one-third part of their land. This system was not favourable to the farmers as they were left with less land to grow food grains on. Mahatma Gandhi protested against it by practising Satyagraha. This made a forceful impact and the government had to agree to the demands of the farmers. He, thus, won his first battle.

The Rowlatt Act of 1919 gave unbridled powers to the government to arrest and imprison suspects without holding a trial. Demonstrations and meetings were held all over the nation to protest against this act.

A public meeting was held on April 13, 1919 in a park called the Jallianwala Bagh in Amritsar, where thousands of people, including women and children, assembled. This meeting was held to protest against the arrest of Indian leaders under the Rowlatt Act.

Suddenly, a military troop of about 150 British soldiers entered the park and blocked the only way out. The commander of that troop, General Dyer, ordered his men to open fire on the crowd without any warning. The British soldiers fired endlessly on the unarmed peaceful demonstrators, thus, killing hundreds of innocent men, women and children.

This act of brutality shocked the entire country. It is considered the worst political crime committed by the British government in the modern history.

After the Jallianwalla Bagh massacre, the British 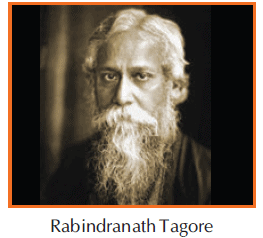 government’s cruelty was at its peak. In this scenario,

against the British government. The Congress passed its resolution on the non-cooperation movement, first in 1920 in its special session at Calcutta (Kolkata) and then, in the annual session at Nagpur.Under the non-cooperation movement, Mahatma Gandhi called for a boycott of British legislatures, courts, educational institutions and goods. British titles and honours were renounced. People like Rabindranath Tagore and Subramania Iyer renounced their knighthood. The Congress boycotted the council elections. People all over the country joined in hartals (demonstration) and the burning of foreign goods.

Students and teachers left institutions run by the British government and started joining Indian national educational institutions, such as the Bihar Vidyapeeth, Kashi Vidyapeeth and Jamia Millia Islamia. Many Indian lawyers gave up their practices and many others resigned from government jobs.

The entire non-cooperation movement was peaceful as per Mahatma Gandhi’s wishes. But on the February 15, 1922, an unfortunate incident occurred at Chauri-Chaura in Uttar Pradesh. British troops fired at a procession of about 3000 farmers here. The angry mob attacked the police station and set it on fire. Twenty-two policemen died in this incident. Agitated by this violent act, Mahatma Gandhi decided to call off the non-cooperation movement. Many Indian leaders were not in favour of this decision but Gandhiji stood firm in his belief of non-violence.

The British Government appointed the Simon Commission in 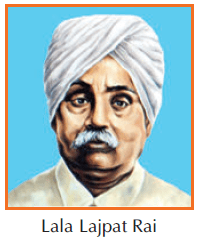 November, 1927 to handle the deteriorating situation of law and

order in India. The Commission came to investigate the failure

of existing reforms and recommend fresh implementation. As all the members of the Commission were British, the Congress and people of India boycotted it. In a peaceful demonstration against the Simon Commission, Lala Lajpat Rai was severely injured in the lathi charge by the British and died soon after.

A Congress session was held at Lahore in December 1929. 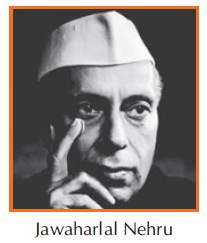 In this session, under the presidentship of Pandit Jawaharlal

Nehru, the Indian National Congress passed a resolution declaring Poorna Swaraj (complete independence) to be the goal of the National Movement.

On December 31, 1929, Jawaharlal Nehru unfurled the tricoloured flag on the banks of the river Ravi as a symbol of complete independence. The leaders pleaded to the people not to submit to British rule any more.

The Lahore session of the Congress (1929), therefore, is a landmark in the history of our freedom struggle. At the Lahore session, it was also decided to launch the Civil Disobedience Movement under Mahatma Gandhi’s leadership.

Gandhiji started the Civil Disobedience Movement with his famous Dandi march. At that time, the British had made a law that nobody was allowed to collect salt from the sea without a license. Gandhiji marched with 78 followers from his ashram at Sabarmati in Ahmedabad to a seashore village, 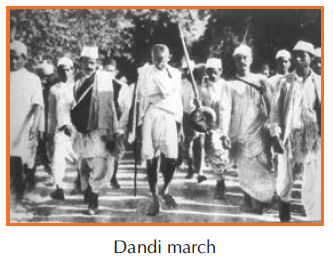 called Dandi in Gujarat. They travelled a distance of 385 kilometres on foot and reached Dandi on April 6, 1930. There, Gandhiji made salt himself, thus breaking the Salt Law. There were many leaders in various parts of the Indian territory who joined this freedom movement. Khan Abdul Ghaffar Khan, who was called ‘Frontier Gandhi’, joined from the northwesternIndia, 13 year old Rani Gaidinliu of Nagaland from the north-east and C. Rajagopalachari from the south. This movement took the shape of a nation-wide Civil Disobedience Movement in which women also actively participated. This movement continued till 1934. When the British found it difficult to handle this movement, they decided to introduce some new reforms in India.

The Government of India Act was passed in 1935. This was based on the report of the Simon Commission and the conclusion of the Round Table Conference. It allowed more participation from Indians in the administration. But Indians were unhappy because practically all powers remained in the hands of the British. Indians did not want any changes; they just wanted the British to leave India.

The Second World War broke out in 1939. The British forced India to join the war

without the consent of the Indian leaders. By 1942, the war took a serious turn and 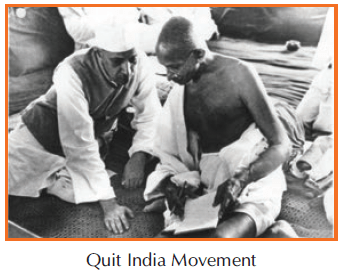 passed a resolution known as the Quit India

resolution. In this resolution, Mahatma Gandhi asked the British to quit India and gave a call to his countrymen to ‘Do or Die’ for independence. On August 9, 1942, all the prominent leaders, including Mahatma Gandhi, Pandit Nehru and Sardar Vallabhbhai Patel were arrested, which resulted in violence thoughtout the country.

The Indian National Army or the Azad Hind Fauj 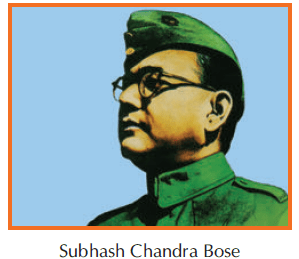 was formed in 1943 by Subhash Chandra Bose to

fight the British. His aim was to free India from the

British rule by the use of force. Subhash Chandra Bose, popularly known as Netaji, gave the slogans

‘Jai Hind’ and ‘Dilli Chalo’ to the people of India. The Azad Hind Fauj was an army made in Japan by Indian prisoners, who were made captive by the Japanese during the Second World War. This army was formed with the help of General Mohan Singh and Rash Behari Bose who fought for the freedom of India.

After the Second World War, the power of the 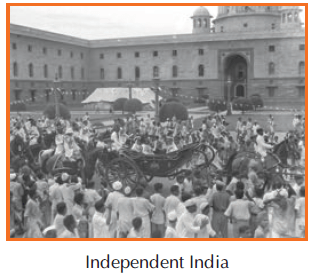 struggle in India had also reached a tremendous

it was no longer possible to rule India.

The British Prime Minister, Clement Atlee, had no option but to give India her independence. The Muslim League, headed by Mohammad Ali Jinnah, put forth its demand for the creation of Pakistan . The Viceroy of India, Lord Mountbatten played a prominent role in India’s partition. At last, both the Congress and the Muslim League agreed for India’s partition. A new country was born on August 14, 1947 called Pakistan. India became independent on August 15,1947. 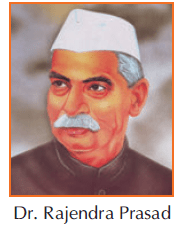 Satyagraha: the act of non-cooperation.

Disobedience: failure or refusal to obey.