A pattern is formed by repeating a unit, which may be a set of numbers or shapes, according to a rule.

A square number is obtained by multiplying the number by itself.

Now, can you name the next two square numbers and draw the square patterns?

Triangular patterns using dots can be made in two ways as given below.The number of dots in each triangle is known as a triangular number.

2. Look at the following triangular pattern by using dots.

Edurev Tips: We get a square number on adding two

We get a square number by adding two consecutive triangular numbers. The square numbers are shown in a multiplication square as given alongside. They lie on a diagonal line. 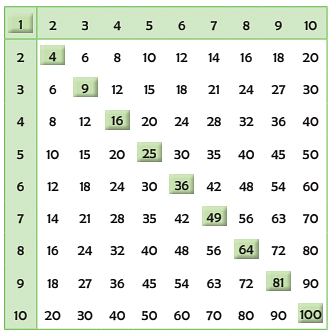 Observe the following patterns around you. Patterns in the border of dupatta, bedsheets,

These are called border patterns. We see that border patterns enhance the original beauty.These border patterns are formed by repeating a certain shape or unit in one direction.Following a basic symmetry repetition, maybe of translation, vertical reflection or horizontal reflection.To understand better, let us take an example.Consider the symbol

as the basic unit or shape in the border pattern. We can get the

follows the different symmetries as shown below.

bricks and the cross-section of beehives.

A tiling pattern is formed by the repetition of a single unit or shape which when repeated, fills the plane with no gaps and no overlaps.

Look at the following patterns.

Now, observe these patterns. Are they tiling patterns? If not, then why not?

Thus, the above patterns are not tiling patterns.

Tiling Patterns Around UsTiling patterns are found in things around us.

Multiple tiling patterns can be made using a single shape as shown.