The document Chapter Notes - Playing with Numbers Class 6 Notes | EduRev is a part of the Class 6 Course Mathematics (Maths) Class 6.
All you need of Class 6 at this link: Class 6 Factor: An exact divisor of a number is called its factor.

Multiple: The product of two numbers is called a multiple of each of the two numbers being multiplied.

Prime numbers: Numbers with two factors, 1 and itself, are called prime numbers.

Divisibility of numbers by 5A number that has either 0 or 5 in its ones place is divisible by 5.

Divisibility of numbers by 10A number that has 0 in its ones place is divisible by 10.

Divisibility of numbers by 11If the difference between the sum of the digits at the odd and even places in a given number is either 0 or a multiple of 11, then the given number is divisible by 11. 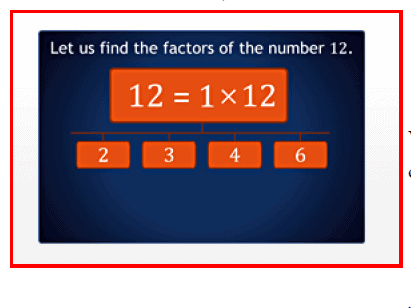