The document Chapter Notes - Pollution of Air and Water Class 8 Notes | EduRev is a part of the Class 8 Course Science Class 8.
All you need of Class 8 at this link: Class 8

POLLUTIONPollution is the introduction of harmful or poisonous substances into environment that may cause adverse effects.Different types of pollution:1. Air Pollution

It is the contamination of air, which takes place due to unwanted substances which causes harmful effects on both biotic and abiotic components. The things which are responsible for contamination of air are called air pollutants. These pollutants may result from natural causes like smoke or dust from forest fires or volcanic eruptions and from man-made causes like burning of fuels, smoke from factories etc. Incomplete burning of fossil fuels, like petrol and diesel, results in the production of colourless, odourless and toxic carbon monoxide gas. Smog is a mix, in the air, of smoke and chemicals with fog. The chemical components of smog can include ozone, sulphur dioxide, nitrogen dioxide and carbon monoxide. Smog can trigger breathing difficulties like asthma and coughing. Pollutants like sulphur dioxide and nitrogen dioxide are released in large quantities by petroleum refineries.These emissions can cause respiratory problems and also permanent lung damage. CFCs or chlorofluorocarbons are synthetic products that contain carbon, chlorine and fluorine. They were formerly used as a refrigerant and as a propellant in aerosol or air sprays.CFCs contribute to the depletion of the ozone layer that protects us from the harmful ultraviolet rays of the sun.Soot is released when automobiles burn fossil fuels, like petrol and diesel. Pollutants like sulphur dioxide and nitrogen dioxide, which are produced by industries like rubber processing, automobile chemicals and the Mathura oil refinery near Agra, are responsible for the decolourisation of the Taj Mahal.

These gases react with water vapour in the atmosphere and form sulphuric acid and nitric acid. Precipitation carries these acids back to the earth as acid rain.The corrosion of the Taj Mahal due to acid rain is called 'marble cancer.'Global warming has already started melting the polar ice caps, which has resulted in a rise in the global sea level. Gases, like methane, nitrous oxide and water vapour, also contribute to the greenhouse effect, and, along with carbon dioxide, are collectively called the greenhouse gases. Steps to prevent air pollution:Use of fuels like CNG and unleaded petrol in automobiles. Switching to alternative fuels, like solar energy, hydropower and wind energy. Planting trees.Travelling to school on a bicycle or on public transport or car pooling. Avoiding the burning of leaves, trash and vegetable matter. Restricting cigarette smoking.Water PollutionWater covers two-thirds of the earth's surface and makes up 75 per cent of the human body. A water body is said to be polluted when toxic substances damage it, making it undrinkable and also dangerous for organisms to live in it. Harmful substances, like sewage, silt, toxic chemicals and domestic waste, are called water pollutants. They spoil the quality of water by altering its smell and colour, and render it unfit for drinking.Pollution can enter a body of water in many ways, such as domestic sewage, agricultural run-off containing fertilisers and pesticides, eroded soil, acid rain, chemicals released from industries or other wastes from cities and towns. At places along the Ganga, people bathe, wash clothes and even defecate in the water. They also throw huge quantities of garbage, flowers, idols of gods and goddesses, untreated sewage, animal carcases and non-biodegradable polythene bags directly into the river.Chemical contamination of water due to chemicals, such as compounds of arsenic, fluorides and lead, cause plants and animals to die. The soil is also affected by polluted water, causing changes in its acidity, and, therefore, the growth of plant life. Polluted water is unsuitable for drinking, recreation, agriculture and industry. 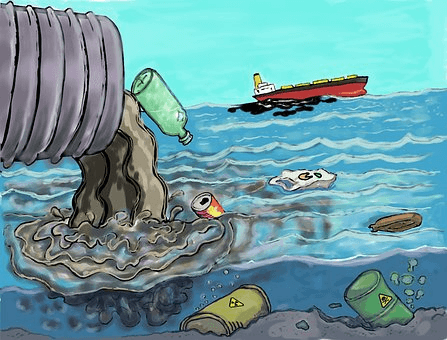 Contaminated water destroys aquatic life and reduces its reproductive ability.Water pollution drastically reduces the quantity of dissolved oxygen in water, which results in the death of aquatic organisms. Anaerobic micro-organisms release gases like methane and hydrogen sulphide, leaving a foul-smelling, waste-filled body of water. The large quantities of chemicals that are washed in from the fields are responsible for the excessive growth of algae. Once the algae die, it serves as a food for bacteria. As a result, a lot of oxygen in the water is used up and many aquatic organisms die. Water that is suitable for drinking is called potable water. Sewage treatment plants treat wastewater to purify it before releasing it back into rivers and lakes. Municipal bodies treat water before supplying it to our households.

Some popular ways of making water potable are:

Reduce, reuse and recycle is a popular mantra and one that is so important for us to practise.