1. CASTE AND THE CASTE SYSTEM

Caste is a combination of two sets of principles —(1) Difference and separation. The scriptural rules ranging from marriage, food sharing to occupation prevents the mixing of castes.(2) Wholism and hierarchy: the hierarchical division of caste, on the other hand, is based on the distinction between “purity and pollution”.

8. A proprietary caste group is a group that owns most of the resources and can command labor to work for them.

11. The Govt. India Act of 1935 gave legal recognition to the lists of ‘schedules’ of castes and tribes.

12. In Post Independent India, programs were undertaken for the upliftment of depressed classes. Social reformers like Jyotiba Phule, Periyar etc. worked towards lower caste upliftment, abolition of caste distinctions and other restrictions.

13. The abolition of caste was explicitly incorporated in the Constitution by the state. During this period some of the steps undertaken were reservation of seats for SC & ST’s, no caste rules in the jobs created in the modern industry, urbanization & collective living in cities and stress on meritocracy.

14. In the cultural & domestic spheres, caste has remained unaffected by modernization and change while in the sphere of politics it has been deeply conditioned by caste as formation of caste based political parties.

15. New concepts were coined to understand the process of change. The terms were sanskritization and dominant caste by M.N. Srinivas.16. Sanskritization is a process whereby members of a caste (usually middle a lower) attempt to raise their social status by adopting the rituals & social practices of the higher castes.

17. Dominant caste was those which had a large population and were granted land rights. They were politically, socially and economically dominant in their regions for example: the Yadavs of Bihar and Uttar Pradesh, the Vokkaligas of Karnataka, the Reddys and Khammas of Andhra Pradesh, the Marathas of Maharashtra, the Jats of Punjab, Haryana and Western Uttar Pradesh and the Patidars of Gujarat .

18. In the contemporary period caste has tended to become invisible for the upper caste, urban middle and upper classes and more visible for the lowercaste. 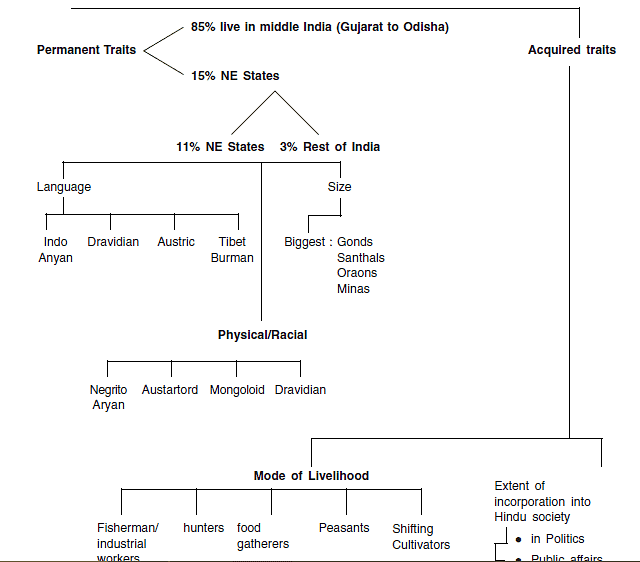 21. The ‘Isolation’ and ‘Integration’ debate on tribes is based upon tribal societies as isolated wholes. The isolationist believe that tribals needed protection from traders, moneylenders and Hindu and Christian missionaries, all of whom try to reduce tribals’ to detribalised landless labour. The integrationists, believe that tribal’s are merely backward Hindus, and their problems had to be addressed within the same framework as that of other backward classes.22. National development involving the building of large dams, factories and mines were undertaken at the expense of the tribes. Eg Narmada BachaoAandolan.

23. Tribal identities today are centered on idea’s of resistance and opposition to the force exercised by the non-tribal world. The formation of Jharkhand and Chhattisgarh has been a result of this assertion of tribal identity but the political system is still not autonomous.

24. Tribal movements emerged to tackle issues relating to control over vital economic resources, matters of cultural identity. All this has been made possible due to the gradual emergence of an educated middle class among tribal communities, though the assertion of identity of tribal middle class maybe different from a poor and uneducated one.

25. FAMILY AND KINSHIPA. Family can be nuclear or extended. Modern family consists of only one set of parents and their children unlike extended family where that is more than one couple and after more than two generations living together.

B. Diverse forms of family 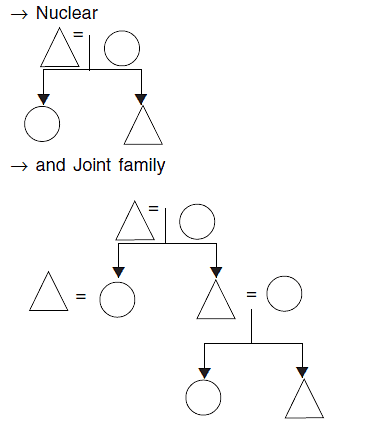 C. Other forms of family are:

26. Kinship are connections between individuals, established either through marriage or through the lines of descent that connect blood relatives (mothers, fathers, siblings, offspring, etc.) 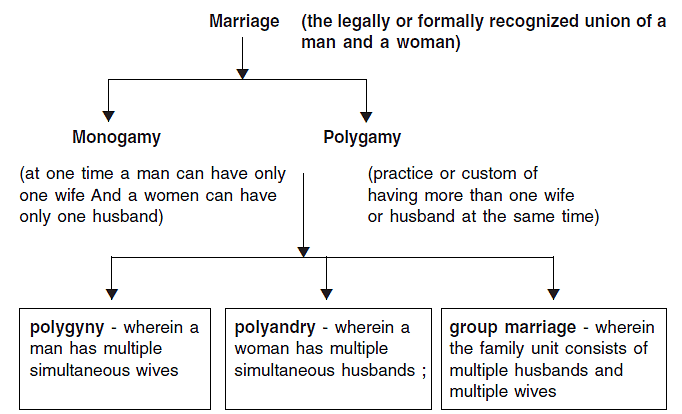 27. The Khasi matriliny highlights the distinction between matriliny and matriarchy.