The document Chapter Notes - Structure of the Atom Class 9 Notes | EduRev is a part of the Class 9 Course Science Class 9.
All you need of Class 9 at this link: Class 9

1. A major challenge before the scientists at the end of 19th century was to reveal the structure of the atom as well as to explain its important properties. The elucidation of structure of atoms is based on a series of experiments.2. One of the first indications that atom is not indivisible comes from studying static electricity and the condition under which electricity is conducted by different substances.3. There are charged particles in the atom, positively and negatively charged. 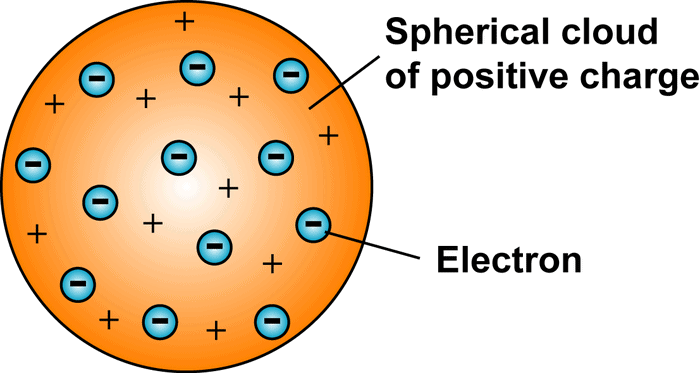 Fig 4.1:Thomson's Model of an Atom

8. Rutherford’s model of Atom: Rutherford performed an experiment to arrive at the arrangement of particles in an atom. He bombarded a gold foil with fast moving a-particles. a-particles are helium nuclei with a mass of 4 u and a charge of +2. The following observations were made :(i) Most of the fast moving a-particles passed straight through the gold foil (see Figure).(ii) Some of the particles were deflected by the foil by small angles.(iii) One out of 12000 particles appeared to rebound.Rutherford made the following conclusions from the scattering experiment:(i) Most of the space inside the atom is empty because most of the a-particles passed through the gold foil without getting deflected.(ii) Very few particles were deflected from their path, indicating that the positive charge of the atom occupies very little space(iii) A small fraction of a-particles were deflected by 180°, indicating that all the positive charge and the mass of the atom were concentrated in a very small volume within the atom. 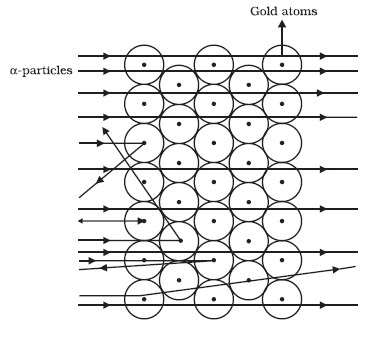 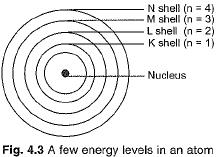 11. Discovery of neutrons: In 1932, J. Chadwick discovered particles in atom, which had no charge and a mass equal to that of a proton. It was given the name neutron. It is represented by ‘n’ Mass of an atom is given by the sum of the masses of protons and neutrons present in the nucleus.12. Distribution of electrons in different orbits (shells): Distribution of electrons in the orbits of an atom is governed by Bohr-Bury rules. These rules are:(i) The maximum number of electrons present in a shell is given by 2n2 where n is the orbit number like 1, 2, 3,.......... Thus, the maximum number of electrons in different orbits can be calculated as under:In first orbit or K-shell (n-1)=2 x n2 =2 x 12 =2In second orbit or L-shell (n-2)=2 x n2 =2 x 22 =8In third orbit or M-shell (n-3)=2 x n2 =2 x 32 =18and so on.(ii) But, the maximum number of electrons that can be accommodated in the outermost orbit is 8.(iii) Electrons are not accommodated in a given shell, unless the inner shells are filled.13. Structure of first eighteen elements from hydrogen to argon: Atomic structures of first eighteen elements showing the number of electron s in different orbits or shells, is given in Fig. 4.4. 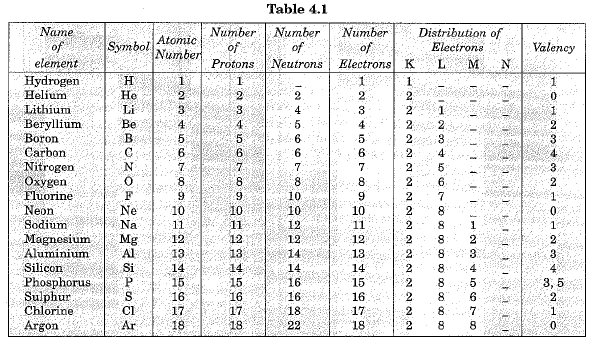 For example, nitrogen as written as

18. Isotopes: Isotopes are defined as the atoms of the same element having the same atomic number but different mass numbers.Hydrogen has three isotopes namely protium

Protium, deuterium and tritium are also represented by H, D and T respectively. Chlorine occurs in nature in two isotopic forms with masses 35 u and 37 u in the ratio of 3 : 1. Mass of an atom of any natural element is taken as the average mass of all the naturally occurring atoms of that element. The average atomic mass of chlorine atom can be calculated as under :

19. Applications of isotopes: Isotopes have the following applications:(i) An isotope of uranium is used as a fuel in nuclear reactors.(ii) An isotope of cobalt is used in the treatment of cancer.(iii) An isotope of iodine is used in the treatment of goiter.20. Isobars: The element calcium (Ca) posseses atomic number 20 and the element argon (Ar) posseses atomic number 18. The number of electrons in both these elements is different. But the mass number of both the elements is 40. Thus, the total number of nucleons (protons and neutrons) is the same in the two atoms. Such atoms of different elements with different atomic numbers but having the same mass number are called isobars.