The document Chapter Notes - Symmetry Class 6 Notes | EduRev is a part of the Class 6 Course Mathematics (Maths) Class 6.
All you need of Class 6 at this link: Class 6 A figure can have line symmetry if a line can be drawn dividing it into two equal halves. The line is called the line of symmetry.

A figure can have line symmetry if a line can be drawn dividing it into two equal halves. The line is called the line of symmetry. We can find examples of objects showing line symmetry in nature. For example, a butterfly, some leaves and flowers show line symmetry.

Examples of line symmetry can also be found in many of our ancient and modern buildings.

A kite shape has only one line of symmetry. 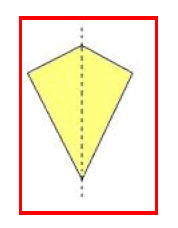 A rectangle has two lines of symmetry. An equilateral triangle has three lines of symmetry. A circle has an infinite number of lines of symmetry. The line of symmetry is related to mirror reflection.

The left and the right sides of an object appear inverted in a mirror. An object and its image show mirror symmetry, with the mirror line being the line of symmetry.

All the other letters of the alphabet appear reversed in their mirror image. Symmetry has plenty of applications in real life, as in art, architecture, textiles designing, geometrical reasoning, Kolams, Rangoli, etc.