Look at the mirror kept vertically.The figure in front of the mirror has a reÀection image in the mirror.See the images of VII and R.The mirror image and the given original object are exactly symmetrical, the mirror line is the line of symmetry. 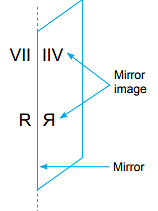 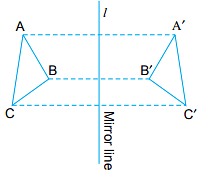 (ii) Also the length of

and ∠BAC = ∠B'A'C', ∠ABC = ∠A'B'C',  ∠BCA = ∠B'C′A'.(iii) AA', BB' and CC' are perpendicular to the mirror line and are bisected by the mirror line.Mirrors are used in kaleidoscopes to produce images of the small pieces of bangles kept inside. A number of images produced due to the number of mirrors used, give rise to different symmetrical designs in the kaleidoscope.

To Draw A Mirro Image of a Given Figure 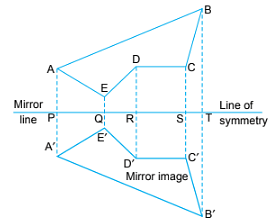 To Complete a Figure With Two Lines of Symmetry

Let ABCDE be the given part of the figure and p, and q be the two lines of symmetry. 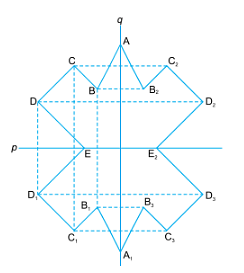 Imagine cutting straight through the middle of a cube as shown in the figure.The cut face (shown shaded in the figure), is called a section of the cube. In this case, the section is a square.

When we make a straight cut through a solid, we say that the solid is cut by a plane, i.e., the section is flat.

Imagine that a cuboid is cut into two pieces by a plane as shown below.

Now take one of the pieces and put the cut face against a mirror.

Observe the familiar figures of a line segment, equilateral triangle, square, etc. Besides having linear symmetry, these figures have another type of symmetry which is called rotational symmetry.

Another rotation of 180 about the central point O gives A1B1, a new position A2B2, once again fitting into the original line segment AB, A2 falling on A and B2 falling on B.

The midpoint of the line segment is the centre of rotation.

The point around which the figure is rotated is called the centre of rotation.

Edurev Tips:  A full rotation does not mean that a figure has rotational symmetry because every shape could fit exactly into itself after a full (360º) rotation.

Example 2: Rotate an equilateral triangle about its centroid (the point where the medians meet) through an angle of 120º. After a rotation of 120º, 240º, 360º, the triangle gets three new positions of A1B1C1, A2B2C2 and A3B3C3 falling on BCA, CAB and ABC respectively.

Example 5: A regular pentagon (a polygon having 5 equal sides), a design of flower design with 5 petals are the figures having rotational symmetry of order 5.

Example 6: A regular hexagon (a polygon having 6 equal sides) has rotational symmetry of order 6 and angle of rotation = 60º.

A regular octagon (a polygon having 8 equal sides) has rotational symmetry of order 8 and angle of rotation = 45º.

Figures with Linear Symmetry as well as Rotational Symmetry

Some figures have both types of symmetry, linear as well as rotational.Consider the following examples :

Only Linear SymmetryThere are some figures which have only one line symmetry but have no rotational symmetry.For example (a) Letters of English alphabet A, C, D, E, M, T, U, 9, W, Y(b) Isosceles triangle.

Only Rotational SymmetryWe have some figures which have only rotational symmetry but no linear symmetry. For example, letters of the English alphabet N, S, Z.

If we join together six identical squares, edge to edge, we get a cube or the outside surface of the cube.

We can avoid a lot of unnecessary sticking if we join some squares together before cutting out.Suppose we want to make a cube out of cardboard or a piece of paper. We need a pattern giving us the shape of the cardboard or the piece of paper to make the cube.Figure (a) below shows, the shape of the pattern of six squares. When this shape is folded along the edges, a cube is formed as shown.

A cross plan such as shown in figure (a) above, which can be folded to form a cube is called the net of the cube.

A net of a 3D figure is the shape that can be cut out of a flat piece of paper or cardboard and folded to make the 3D shape.

There are other arrangements of six squares that can be folded up to make a cube. For example, a cube can also be made from the nets shown below.

However, not all arrangements of six squares will work as shown below :

It is easy to make a solid shape from a piece of paper or cardboard by first drawing a net of the faces of the solid. The net can be made up of different plane shapes (rectangles, squares, triangles).The figure below shows the net of a cuboid of dimensions 5 cm × 3 cm × 2 cm.

The net for a cylinder without a top and a bottom is shown. The length of the net is equal to the circumference of the cylinder.

The net of a cone has one circular base and one curved surface. 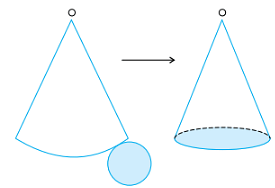