Present day’s Democratic Republic of the Congo was earlier known as Zaire. Same is true for the river Congo which was known as the river Zaire. For convenience we may write simply Congo instead of Democratic Republic of the Congo. Congo is the third largest country in Africa and the river Congo is the second largest river. The capital of Congo is Kinshasa; hence the country is often called Congo Kinshasa to distinguish it from the other Congo Republic. Congo lies between 5° N and 13° S of Equator and between 12° E and 30° E meridians. You can find its neighbouring countries from any atlas but do not omit the Republic of Congo. 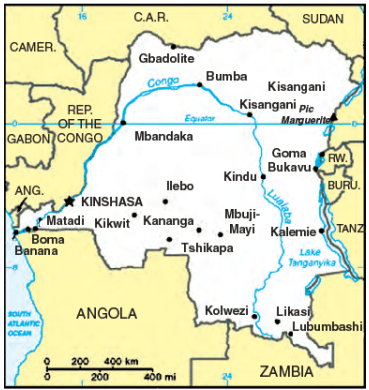 Democratic Republic of the Congo - location

Three-fifth of the Congo River basin is in Congo. You should recall that basin is the area drained by a river and its tributaries. The basin is surrounded by many plateaus; some of them have mountains as well. Mitumba Mountains rise to the height of 5,000 m. The river has many falls, thus limiting its navigational possibilities. But many hydro electric power stations have been developed on it. The river meets the Atlantic Ocean after covering about 4,700 km. Congo has humid tropical climate. The day-time temperature may vary between 33° C and 26° C and night-time temperature may not fall below 20° C. The average rainfall varies from 2,000 mm. to1,500 mm. 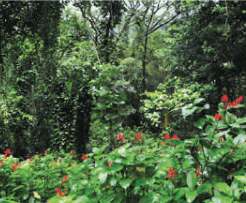 There is no dry season along the Equator, but in the north of it, dry season is in winter and in the south of it dry season is in summer. Congo’s central basin has the world’s most extensive tropical rain forest. It is surrounded by savannas (grass land) towards the plateaus. Quite often the rain forest and the savannas run into each other. Therefore, there is a wide diversity of animal life. Congo have ores of copper, industrial diamonds, gold, zinc, and silver. There are many other minerals ores are found as well. The country has petroleum reserves which are being explored these days. Forests cover more than three-fourths of the total land area. Main occupation of the people of Congo is agriculture.

How Geographical Location and Climate Affect Living of People

The Equator passes almost the middle of Congo and there are heavy rains almost althrough the year on and around it. There are dense rainforests in which the sun is hardly ever penetrate. Trees are evergreen with no fixed season for leaf shedding. Therefore, animals are able to live on the top branches of trees or creep along the ground.  One can see many types of birds and butterflies. There are many subspecies of monkeys and apes. Arboreal lemurs are worth mentioning besides chimpanzees and gorillas.  Insect world is much varied, especially ants. Many types of lizards, frogs and snakes are in abundance.

There are hard wood trees and tree felling is not possible. There is no human habitation deep in the forests. It is only on the periphery of the forests. Pygmies people are known to be living around these forests. Their average height is 59 inches. Most of them prefer food gathering and hunting besides fishing. Therefore, they are supposed to be always on the move. Now some of them are settling down as farmers. They wear minimum clothes.

High up on plateaus, Congo has savanna distributed around forests. Savannas are grass lands with sparsely distributed trees which are altogether different than rainforests. Grass may grow up to three to four meters high. Here, the animal world is dominated by elephants, wild buffaloes, giraffes, and deer of many species, predatory animals like lions, cheetah, wolves and wild dogs. Species of birds are also different  than the rainforests. Vultures, hawks, eagles, ostrich and other birds are found here. Species of lizards and reptiles are different than those in rainforests.

BantuFurther away from the banks of river Congo a few marsh lands are there. Special species of fish which can live in water as well as in mud is found there. Hippopotamus, crocodiles are also seen. Mangrove tree grows in swamps. About two-third of the people of Congo are Bantu. There are hundreds of different groups among Bantus. These may differ culturally and socially among themselves. They also speak different languages. People of Congo speak French and English besides their on local languages. 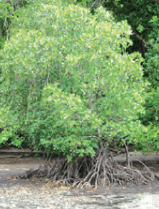 Main occupation of the people of Congo is agriculture. They grow cassava; its root is their staple food. The root is like sweet potato. Paddy is another crop which they grow that needs plenty of water. Their other economic activities is mining which mostly they export. They also cultivate coffee, rubber, sugarcane, palm and coconut, most of which is exported.TransportRivers are the most important mean of transport. Railway and roads come next to it.