1. Market refers to a place where things are bought and sold, a gathering of buyers and sellers (weekly vegetable market) or a category of trade or business (market for Cars / readymade clothes)

2. Adam Smith in his book “The Wealth of Nation” talked of an “unseen force” (Invisible hand) at work, in a market economy, that converts what is good for each individual into what is good for society. This stimulates the economy and more wealth is created. This can be brought forth through the economic philosophy of laissez faire , a French phrase, meaning ‘leave alone’ or ‘let it be’. 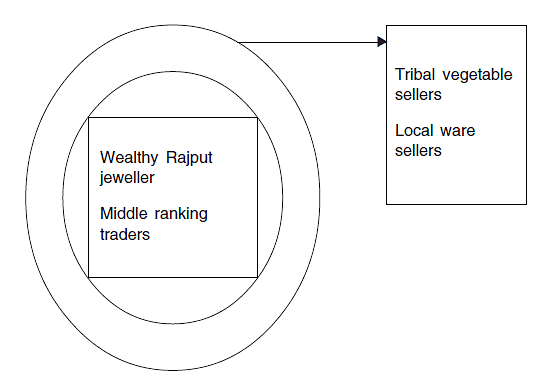 5. A. Concept of Colonialism—

B. The Advent of colonial rule in India led to the demise of the handloom industry. India became a source of raw material, agricultural products and consumer ofmanufactured goods.

C. The expansion of the market economy brought in new communities taking advantage of the available opportunities to control/hold economic power even after independence eg. Marwaris

6. Jajmani is an economic system where lower castes performed various functions for upper castes and received grains in return. It is also characterised by an Unbroken Hereditary relationship-wherein the kameen remains obliged to render services throughout his life to a particular jajman. Due to the permanency of relationship, both the jajman and kameen families become mutually dependent on each other.

8. A Commodity: A good or service that may be bought or sold in the market.B Commoditization/Commodification- Transformation of a non- commodity into a commodity Eg. Sale of kidney, Labor, Skills, marriage bureau etc. Commodification occurs when things that were earlier not traded in the market become commodities

C. Consumption— final use of goods & services by people (consumers), means by which social distinctions are created and communicated (eg. Advertisements).D. Labour power: Capacity for labour; the mental and physical capabilities of human beings, that are used in the process of production. (As different from labour, which is work performed)

10. Globalization: a complex series of economic, social, technological, cultural and political changes that have increased the independence, integration and interaction among people and economic actors (companies) in different locations (eg. BPO, Yoga, Pushkar).

11. The world is increasingly getting connected.

12. Marketisation use of market or market-based processes to solve social, political or economic problems.

13. Liberalization: The process whereby state controls over economic activity are relaxed and left to the market forces to decide.

14 Support prices - Price at which the government agreed to buy agricultural, Commodities, ensures minimum income for farmers.Subsidies - Government pays part of the price charged for inputs, lowers cost of farming.