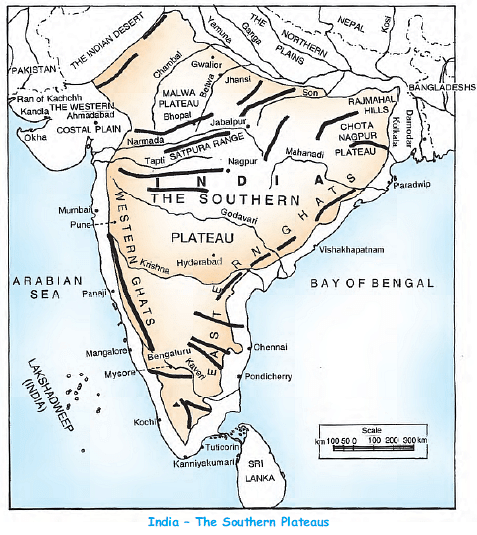 In India, Plateau lands lie in the south of the northern Plains. On the eastern and western sides there are hilly regions known as the Ghats. The Aravalli Ranges lie to the north–west of the Southern Plateau region. In the north–east lie the Rajmahal Hills.

The Southern Plateaus are near triangular in shape. Kanyakumari marks the southern most tip of the main land and also of the southern plateau region.

River Narmada flows through the Plateau dividing it into two parts. The northern portion is called Central Highlands while the southern portion is known the Deccan Plateau.

The Plateau region covers the largest part of India. The Plateau generally slopes from west towards east. The land surface is rocky and uneven. Soil is not very deep.Low fertile valleys have been formed where the rivers have washed away the rocks. 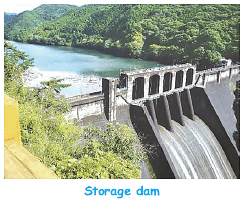 A number of rivers flow through the Plateau region. Narmada and Tapti are the only two rivers that flow westwards and join the Arabian Sea. Other rivers flow eastwards and join the Bay of Bengal. Mahanadi, Godavari, Krishna and Kaveri rise in west. These are rainfed rivers. Unlike the rivers rising from Himalayas, these rivers dry up during the summer season. In case of heavy rainfall, they are flooded. 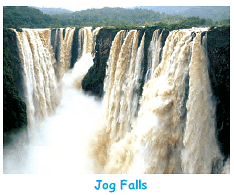 Chambal, Betwa, Ken and Son rivers join the Yamuna and Ganga. These rivers have a northward flow. As the rivers go dry during summers, there are no canal networks as we have in the northern plains. Irrigation in the Plateau region is mostly from tanks in which rain water gets stored. A number of dams have been set up on the rivers to store water.

The Godavari is the most sacred of all rivers in the South. It rises at Trimbak in Maharashtra.

As the Ganga is to the people in north, Kaveri is to the people in south. It is also known as the Dakshina Ganga. Kaveri is the main river flowing through the State of Karnataka. The important dam on the river Kaveri is the Krishnaraja Sagar Lake. The dam on river Krishna is named Nagarjuna Sagar Dam. In the Southern Plateau, there are a number of water falls. The flowing river drops off the hill in a torrent. River Sharavati forms the famous Jog Falls.

The climate is neither very hot nor cold. The temperatures do not show much difference over the year. Rainfall is low except in the western parts.

A number of minerals are found in the north–eastern Plateau. These are mica, coal, iron and manganese. Mica is used as an insulator in electrical machines. It can stand heat and is a non-conductor of electricity. River Damodar flows through the north–east. Most of the India's coal is mined from the Damodar Valley. River Mahanadi has made the Chotanagpur Plateau a wide and fertile plain.

A number of Tribal people still inhabit the Bastar region. In between the Narmada and Krishna rivers lies the Central Plateau. The region is rich in black soil. The soil is very fertile and suited for the cultivation of cotton. 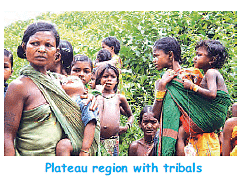 River Chambal flows in the north–western Plateau region. The river has cut deep  ravines which were at one time the abode of many Dacoit gangs.

Plateau lands are flat but on a raised platform.

Plateau lands lie to the south of the northern plains. The southern Plateaus form the triangular south with Kanyakumari as the southernmost point.

Tank irrigation is most common in the Plateau region.

A number of dams have been built on the rivers to store water and run Hydel plants.

The Plateau region is rich in minerals.

The black soil of the valleys is most suited for cultivation of cotton. Rice is also cultivated in the fertile river valleys.