A system or method for carrying people and goods from one place to another is called transport.  Early humans travelled on foot. Then they made the wheel and made carts to travel and to carry goods. In the eighteenth century, James Watt Modern cities have a complex network of roads and Flyovers The Shanghai Maglev train can run at a speed of 430 kilometre per hour.designed an efficient steam engine. In the early twentieth century, the Wright Brothers designed an early version of the aeroplane. These two inventions brought about a revolution in transport.

The Need for Transport

Elsewhere in the world too there is an extensive network of roads. In Europe and North America, there are expressways or freeways. These connect towns, cities and even countries. Railways Railways are convenient for travelling and carrying goods. The British introduced railways in India in the mid-nineteenth century. Today, India has the second-largest railway network in Asia and the fourth largest in the world.

The USA has the largest railway network in the world. Russia, China and Canada also have extensive railway networks. The longest train route in the world, the Trans-Siberian railway, connects Moscow to Vladivostok, a distance of over 9,200 km. The train running on this route covers this distance in 178 hours. Japan, China and France have designed some of the fastest trains in the world. The bullet train of Japan, the Maglev of China and the TGV of France can run at speeds of over 400 km per hour.

The earliest means of water transport were rafts and boats. Over centuries technology improved and people began to construct ships. These could carry more goods and also move faster.

Waterways are cheaper than other modes of transport. This is because unlike roads and railways, waterways require no roads or tracks. Only ports are needed for loading and unloading goods. India has over 200 ports along its coastline.The busiest sea route in the world is the one between eastern North America and western Europe. It is called the North Atlantic Route. The construction of the Suez Canal and the Panama Canal have reduced travel time. The Suez Canal joins the Mediterranean Sea and the Red Sea. This has enabled ships to cross from Asia to Europe without going around the southern tip of Africa. The Panama Canal joins the Atlantic Ocean and the Pacific Ocean. Before it was built, ships had to go around the southern tip of South America to sail from the Atlantic Ocean to the Pacific Ocean.

The first successful attempt to fly was made by the Wright Brothers (Orville and Wilbur) in 1903. Today, air transport has become a popular mode of travel. A large network of air routes connects the whole world. The most dense air network is in western Europe and North America. Some of the busiest airports in the world are in the cities of Atlanta, London, Paris, Chicago, Beijing, Tokyo and Dubai.

Humans have been communicating since ancient times. Faster and reliable means of communication was developed in the nineteenth and twentieth centuries.

India has a large postal network. It is called India Post. It is a widely used means of communication. There are nearly 1,55,000 post offices in our country. We send postcards, letters, greeting cards and parcels through the post office. For documents that need to be delivered urgently, the post office offers the facility of Speed Post.

The telephone is the fastest means of communication today. It was invented by Alexander Graham Bell. People use landline phones and mobile phones for communication. Another popular device is the smartphone. It can be used as a computer and also to send/ make and receive messages and calls. Development of telephones over the years – first the landline, then the mobile phone and now the smartphone

Development of telephones over the years – first the landline, then the mobile phone and now the smartphone

The intercom is an electrical device that allows people in different floors of a building to speak to one another.

The fax is an instant means of communication. The fax machine is connected to a phone line. It is used to send a copy of a handwritten or printed material and photographs. The machine at the receiver’s end prints an exact copy of the document instantly.

The email or electronic mail is a popular means of communication. It delivers messages instantly. To send or receive an email, you must have a device such as a desktop computer, laptop, tablet or smartphone, an email account, and an Internet connection.

The radio was invented by Guglielmo Marconi. It is a source of education as well as entertainment. The radio has a vast audience and even reaches people living in remote areas.

Newspapers and magazines make us aware about the developments in different parts of our country and around the world. Today newspapers have digital versions or e-newspapers which people can read on their laptops, tablets and smartphones. 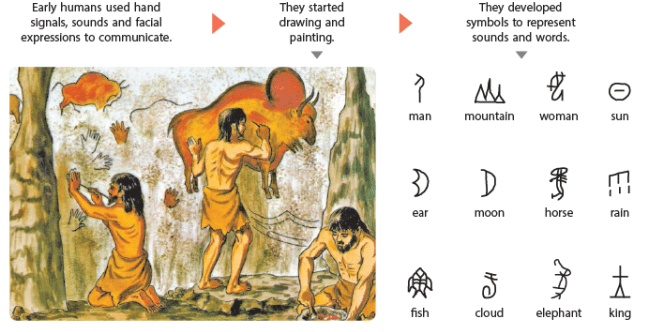 The Story of Communication

John Logie Baird invented the television. This means of communication is more popular than the radio as it is an audio-visual medium. We can watch live and recorded programmes through this medium. Nowadays we can plug in pen drives to the television and play the movies we want to watch.

Cinema is another means of communication that educates as well as entertains. Cinema also spreads social messages. New means of communication have become popular nowadays. These are called social networking services. These include Facebook, WhatsApp, Instagram and Twitter. We can communicate with our friends and relatives, send messages, photographs and videos through these networking services. In times of disasters or emergencies, social networking sites help us access information quickly. These services can be accessed either on smartphones and tablets or on laptops and personal computers.