The document Chapter Notes, Chapter - 4: Tribals, Dikus and The Vision of A Golden Age, SST, Class 8 | EduRev Notes is a part of the Class 8 Course Social Studies (SST) Class 8.
All you need of Class 8 at this link: Class 8

Some were Jhum Cultivators:

i) Jhum cultivation that is shifting cultivation was done on small patches of land, mostly in forests.

ii) The cultivators cut the treetops to allow sunlight to reach ground, and burnt the vegetation on the land to clear it for cultivation.

iii) Once the crop was ready and harvested they moved to another field and left that field fallow for several years.

Some were Hunters and Gatherers:

i) In many regions tribal groups lived by hunting animals and gathering forest produce.

ii) In Khonds were hunters and gatherers living in the forests of Orrisa.

iii) They used many forest shrubs and herbs for medicinal purpose and sold forest produce in the local markets.

iv) Baigas of central India reluctant to do work for others.

(v) Tribal groups often needed to buy and sell in order to be able to get the goods that were not produced within the locality. This led to their dependence on traders and moneylenders.

i) Many tribal groups lived by herding and rearing animals and gathering forest produce.

ii) They were pastoralists who moved with their herds of cattle or sheep according to the seasons.

iii) The Van Gujjars of Punjab hills and Labadis of Andhra Pradesh were cattle herders. The Gaddis of Kulu were shepherds and the Bakarwals of Kashmir reared goats.

Some took to Settled Cultivation:

(i) Many tribal groups had begun to settle down instead of moving from one place to another. They began to use the plough and gradually got rights over the land they lived on

(ii) British officials saw settled tribal groups like the Gonds and Santhals as more civilized than hunter-gatherers or shifting cultivators.

How did Colonial Rule Affect Tribal Lives: The lives of tribal groups changed during British rule.

What Happened to Tribal Chiefs:

(i) Before the arrival of the British, tribal chiefs enjoyed economic power, and had the right to administer and control their territories.

(ii) Under British rule, the functions and powers of the tribal chiefs changed as they were allowed to keep their land titles but were forced to follow laws made by British officials in India.

What Happened to the Shifting Cultivators:

(i) The British were uncomfortable with the shifting cultivators.

(ii) The British wanted to regular revenue source for the state and introduced land settlements.

iii) The British effort to settle jhum cultivators was not very successful.

iv) After facing widespread protests, the British had to allow them the right to carry on shifting cultivation in some parts of the forest.

Forests Laws and Their Impact:

(i) The life of tribal groups was directly connected to the forest.

(ii) The British extended their control over all forests and declared them as state property.

(iii) Reserved forests were for producing timber which the British wanted.

(iv) In reserved forests people were not allowed to move freely or practice jhum cultivation.

(v) Many tribal groups reacted against the colonial forest laws and rose in an open rebellion.

The Problem with Trade:

(i) During the 19th century, tribal groups found the traders and moneylenders were coming into forests and offering cash loans to the tribal people and asking them to work for wages.

(ii) Indian silk was in demand in European markets during the 18th century.

(iii) The Santhals of Hazaribagh reared cocoons. The traders spent in their agents who gave loans to the tribal people and collected the cocoons.

(iv) The coconuts were exported to Burdwan or Gaya where they were sold at five times the price.

The Search for Work:

(i) The plight of the tribals who had to go far away from their homes in search of work was even worse.

(ii) The tribals were recruited in large numbers to work for tea plantations and coal mines through contractors low wages, and prevented them from returning home.

• A Closer Look: The tribal groups rebelled in different of the country against the changes in laws, restrictions on their practices, the new taxes they had to pay and exploitation by traders and moneylenders.

(i) A movement began under the leadership of Birsa Munda.

(ii) The British officials were worried as the political aim of the Birsa movement was to drive out missionaries, moneylenders, Hindu landlords and the government and set up a Munda Raj with Birsa at its head.

(iv) He was released in 1897 people to destroy ‘Ravana’ (dikus and the European), and establish a kingdom under his leadership. and he toured the villages to gather support. He urged

(v) In 1900 Birsa died of cholera and the movement faded out. 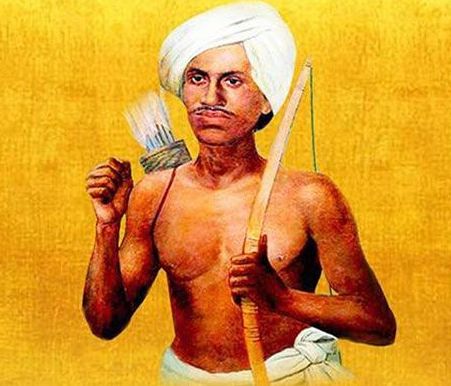 The document Chapter Notes, Chapter - 4: Tribals, Dikus and The Vision of A Golden Age, SST, Class 8 | EduRev Notes is a part of the Class 8 Course Social Studies (SST) Class 8.
All you need of Class 8 at this link: Class 8
All Tests, Videos & Notes of Class 8: Class 8