Acetic acid is the first organic compound synthesised from its elements.REASONS FOR LARGE NUMBER OF ORGANIC COMPOUNDS(a) Catenation: It is the tendency of self combination and is maximum in carbon. A carbon atom can combine with other carbon atoms by single, double or triple bonds. Thus, it forms more compounds than the others.(b) Tetravalency and small size: Carbon being tetravalent, is capable of bonding with four other C atoms or some other monovalent atoms. Carbon can form compound with oxygen, hydrogen, chlorine, sulphur, nitrogen and phosphorus. These compounds have specific properties depending upon the nature of the element or group attached with the carbon.Furthermore, these compounds are exceptionally stable because of the small size of carbon. 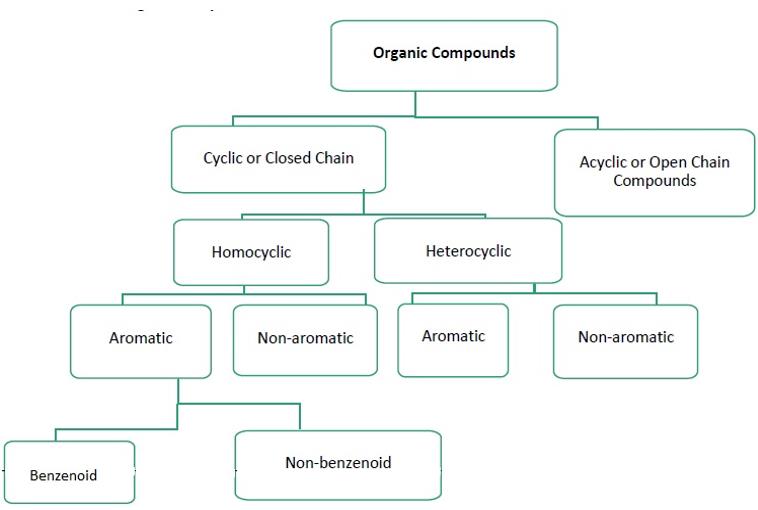 Alicyclic or Closed Chain or Ring Compounds:These compounds contain chains or rings of atoms in their molecules.

Alicyclic Compounds: These compounds contain a ring of three or more carbon atoms in them. They resemble aliphatic compounds in many of their properties.
Example:

Aromatic Compounds: These have a cyclic system containing at last one benzene ring. The parent member of the family is called benzene. Benzene has a homocyclic hexagonal ring of six carbon atoms with three double bonds in the alternate position. Some of the example of various types of aromatic compounds are

In addition to these, there are some compounds which show aromaticity but do not contain any benzene ring. These are called non-benzenoids.
Example:

Heterocyclic Compounds: In these compounds, the ring contains one or more atoms of either nitrogen, oxygen or sulphur in addition to carbon atoms. The atom other than carbon (such as N, O, S) present in the ring is called hetero atoms.Example:

The remaining part of the molecule mainly affects the physical properties such as melting point, boiling point, density, solubility etc.

According to Huckel's rule, if a molecule has 4n + 2 π- electrons, it is aromatic, but if it has 4n π-electrons and has characteristics 1 -3 above, the molecule is said to be antiaromatic. Whereas benzene is aromatic (6 electrons, from 3 double bonds), cyclobutadiene is antiaromatic, since the number of n delocalized electrons is 4, which of course is a multiple of 4. The cyclobutadienyl (2-) ion, however, is aromatic (6 electrons). An atom in an aromatic system can have other electrons that are not part of the system, and are therefore ignored for the 4n + 2 rule. In furan, the oxygen atom is sp2 hybridized. One lone pair is in the π system and the other in the plane of the ring (analogous to the C-H bond in the other positions). There are 6 π-electrons, so furan is aromatic.Some examples of aromatic compounds: 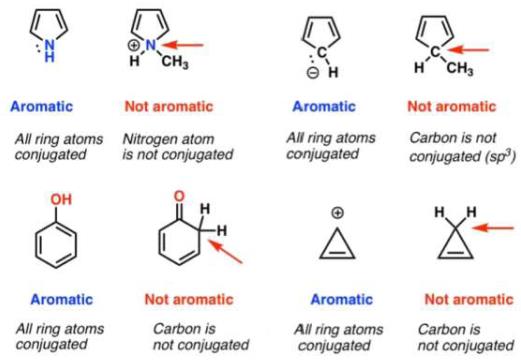 CLASSIFICATION OF CARBON ATOMS 1. On the Basis of Number of C Attached

On the Basis of Position of Functional Group

The document Characteristics and Classification of Organic Compounds - Notes - Class 11 is a part of Class 11 category.
All you need of Class 11 at this link: Class 11
Attempt Now
About this Document