The attractive force which holds various constituents (atom, ions, etc.) together and stabilizes them by the overall loss of energy is known as chemical bonding.

Each element in-universe has a tendency to acquire stability (state of minimum energy). That is done by combining one atom with another leading to the formation of a compound.

Ionic bonding is a type of chemical bonding which involves a transfer of electrons from one atom or molecule to another.

A covalent bond indicates the sharing of electrons between atoms.

It is a type of polar covalent bonding between oxygen and hydrogen wherein the hydrogen develops a partial positive charge. 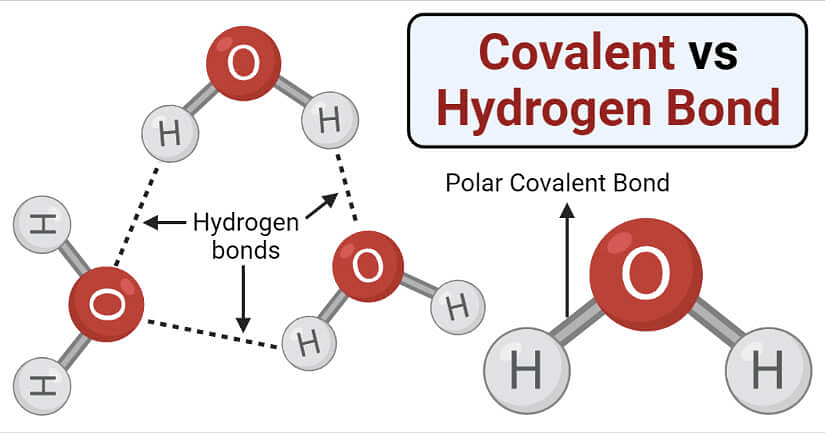 The bond formed between two atoms in which contribution of an electron pair is made by one of them and the sharing is done by both.

For the formation of a coordinate bond, it is necessary to have at least one covalent bond in the compound.

Albrecht Kössel and Gilbert Lewis were the first to explain the formation of chemical bonds successfully in the year 1916. They explained chemical bonding on the basis of the inertness of noble gases.

Lewis's most important ideas were the rule of two (the electron pair), including the essential concept that a single bond consists of a pair of electrons shared between the valence shells of the two bonded atoms, and the rule of eight (the octet rule).

Using the information (a) & (b) the structure is to be assigned as follows :

F.C. (on an atom) = Valence shell electron of that atom – no. of bonds associated with it – no. of unshared electrons on it.

The octet rule dictates that atoms are most stable when their valence shells are filled with eight electrons.

Deviation from the Octet Rule

Try yourself:The octet rule is not valid for the molecule
Explanation

Molecules having an odd number of electrons around them do not follow the octet rule. It is because the rule makes it mandatory to have eight electrons around each of the atoms. In the case of CO, the carbon atom can share at most two electrons from the oxygen atom, therefore a total of 6 valence electrons are present in its outermost shell.

Due to the stable configuration, the noble gas atoms neither have any tendency to gain or lose electrons and, therefore, their combining capacity or valency is zero. They are so inert that they even do not form diatomic molecules and exist as monoatomic gaseous atoms.

Try yourself:Which of the following molecule does not exist due to its zero bond order?
Explanation

Molecular orbital electronic configuration of He2 molecule = (σ1s)2 (σ*1s)2. Bond order = 0, so He2 molecule does not exist.