What is the main function of the Chief Minister?The CM of the state performs functions in relation to the different categories of people:

Other than that, he also performs the following functions:

In Relation to the Council of MinistersThe Chief Minister is the head of state council of ministers. He performs the following functions:

Note: If the CM dies (or resigns), the council automatically dissolves.

In Relation to the State LegislatureHe is the leader of the house and holding this position, he performs the following functions:

Chief Minister and the Governor

The relationship between the Chief Minister of the state and the state’s governor has always been in the news. The debate on the authority of the respective posts has made the rounds throughout. IAS aspirants will understand the dynamics shared by the CM and the Governor by following the details given below: 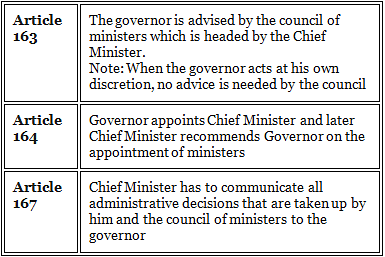