The document Citizenship - Notes Notes | EduRev is a part of the UPSC Course Indian Polity for UPSC CSE.
All you need of UPSC at this link: UPSC

2000: High level committee on the Indian Diaspora under LM Singhvi was set up

to recommend measures for a constructive relationship with them

(b) A person, who is a minor child of a person mentioned in clause (a); or(c) A person, who is a minor child, and whose both parents are citizens of India or one of the parents is a citizen of India; or(d) Spouse of foreign origin of a citizen of India or spouse of foreign origin of an OCI cardholder and whose marriage has been registered and subsisted for a continuous period of not less than two years immediately preceding the presentation of the application

2. The Central Government may specify the date from which the existing persons of Indian Origin Cardholders shall be deemed to be OCI Cardholders (decided on o9-01-2015)

3. Notwithstanding anything contained in point (1), Central Government may, if it is satisfied that special circumstances exist, after recording the circumstances in writing, register a person as an OCI Cardholder.

(a) He shall not be entitled to the right to equality of opportunity in matters of public employment.

(b) He shall not be eligible for election as President.

(c) He shall not be eligible for election as Vice-President.

(d) He shall not be eligible for appointment as a Judge of the Supreme Court.

(e) He shall not be eligible for appointment as a Judge of the High Court.

(f) He shall not be entitled to registration as a voter.

(g) He shall not be eligible for being a member of the House of the People or of the Council of States.

(h) He shall not be eligible for being a member of the State Legislative Assembly or the States Legislative Council.

(i) Entitled to rights as specified by the Central government.(ii) NOT entitled to the following rights:

Central Government can cancel the OCI Card if it is satisfied that: 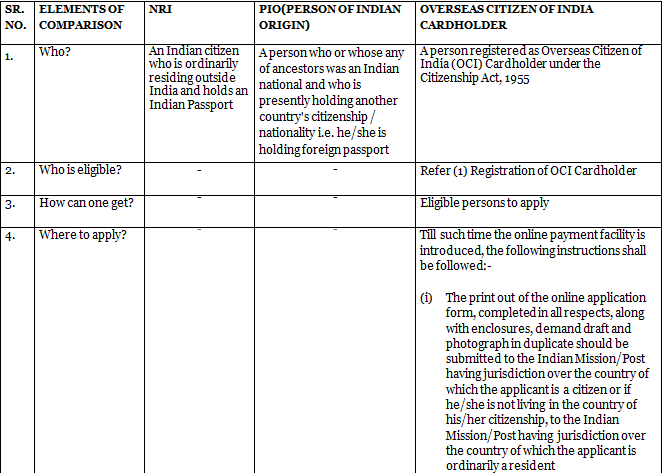 Try yourself:Consider the following statements regarding Overseas citizenship of India.
1. The Citizenship (Amendment) Act, 2005, expanded the scope of the grant of OCI for PIOs of all countries except Pakistan and Bangladesh
2. The OCI is not actually dual citizenship as the Indian Constitution forbids dual citizenship or dual nationality
Which of these statements is/are not correct?
Explanation
View Solution

The amendment proposes to permit members of six communities - Hindus, Sikhs, Buddhists, Jains, Parsis and Christians from Pakistan, Bangladesh and Afghanistan - to continue to live in India if they entered India before December 14, 2014.