Ques 1: Name the country where sex ratio is most unfavourable to women in the world.Ans: Qatar - 311 males per 100 females.Ques 2: Define the concept of human development.Ans: Human development is defined as process of enlarging people?s freedoms and opportunities and improving their wellbeing.Ques 3: How has the 'New Ruhr' landscape emerged?Ans: In Ruhr region the demand for coal declined and torn ore was exhausted, industries used imported iron are leading to the shrinking of the region.Ques 4: Assess the positive aspect of 'trade liberalisation'.Ans: Trade liberalization is removal or reduction of restriction or barriers on the free exchange of goods between the nation.Ques 5: 'The proportion of workers in the agricultural sector in India has shown a declining trend over the last few decades.' What does this trend indicate?Ans: This trend indicates a shift of dependence of workers, from farm based occupation to non-farmed based one. It shows a sectoral shift in the economy of the country.Ques 6: Why do people migrate in large number from rural to urban areas in India?Ans: In India, people migrate from rural to urban areas mainly due to variety of factors such as social, economic and political factors which are:- Employment- Lack of basic infrastructure facility, i.e., education, healthcare.Ques 7: Name the two countries which are the largest trading partners of India as per economic survey report of 2011-12.Ans: (i) U.A.E.(ii) China.Ques 8: 'The knowledge and understanding of the laws of nature are extremely valuable to humankind'. Explain the values that can help to use the gifts of nature in a sustainable manner.Ans: The knowledge of laws of nature are highly valuable for mankind.(i) Better knowledge is developed because of better knowledge of laws of nature.(ii) The understanding of concept of friction and heat helped discover fire.(iii) We use law of aerodynamics of develop faster planes.(iv) Harmony with their natural environment(v) Thus law of nature, if known to man are extremely valuable.Ques 9:

Ans: (i) (a) Africa, (b) Asia(ii) Migration of people in large numbers from rural areas to urban areas mainly in big cities.(iii) The city which are one million or more population is known as million city?.Ques 10: Differentiate between 'Hamleted' and Dispersed? rural settlements of India.Ans: 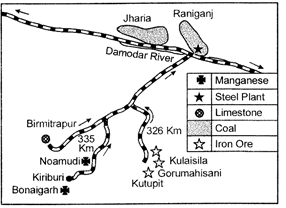 (i) Identify and name the steel plant shown in the diagram. (ii) Name the mining areas which supply coal and manganese to this plant. (iii) Which is the source of water supply to this plant?Ans: (i) Durgapur Steel Plant.(ii) Jharia and Raniganj supply coal to this steel plant.(iii) Noamundi and Bonaigarh supply manganese to this plant.(iv) Damodar river is the source of water supply to this plant.Ques 13: Examine the success of watershed management programme implemented in Jhabua district of Madhya Pradesh.Ans: The watershed management program is highly successful because 20% of the total area of Jhabua district has been treated under this program.1. It helps in prevention of land degradation.2. Improved the soil quality.3. Improved the growth of natural vegetation.4. Improved the source of livelihood for the tribals.Ques 14: Explain any three 'push' and any two 'pull' factors that influence the migration of population in the world.Ans:

Ques 15: Describe any five characteristics of plantation agriculture in the world.Ans: Plantation agriculture is a form of commercial farming where crops are grown for profit.1. Plantation crops are generally raised on large estates of more than 40 hectares.2. Scientific methods of cultivation is used.3. It requires large capital investments (capital invensive)4. Estate farming is the feature of plantation agriculture which is owned by foreigners employing local labour.5. It focuses on the cultivation of cash crops for exparts.6. Tea, coffee, cocoa, rubber, cotton, sugarcane, Banana, coconut etc. are the examples of plantation crops.Ques 16: Explain the importance of 'communication services' in the world.Ans: Importance of Communication Services in the world.1. Communication induces transmission of words, messages, facts and ideas from one place to another.2. Communication through satellites have connected remote corners of the globe.3. The use of internet has expanded the contemporary economic and social space of no mass through e-mail, e-commerce, clearing etc.4. It helps to spread the message from one place to another very quickly.5. The time has reduced to spread the message.6. Global communication has revolutionised the world.7. The whole wind has became one global village.Ques 17: 'The Rhine Waterways is the world's most heavily used inland waterway.' In the light of this statement examine the significance of this waterway.Ans: The significance of Rhine Waterways.1. The Rhine flows through Germany and the Netherlands.2. It is navigable for 700 km from Rotterdum; at its mouth in the Netherlands to Basol in Switzerland.3. Ocean going vessels can reach up to Cologne. The Ruhr River joins the Rhine from the east.4. It flows through a rich coal field and the whole basin has become prosperous manufacturing area.5. Dusseldorf is the Rhine post for the region.6. Huge tonnage moves along the stretch soon of the Ruhr and it is the world's most heavily used waterway.7. It connects the industrial areas of Switzerland; Germany, France, Belgium and Netherland with the North Atlantic Sea Route.Ques 18: Examine the economic and social consequences of migration in India.Ans: The economic consequences of migration are:1. The major benefits for the source region is the remittance sent by the migrants which is the major sources of foreign exchange.2. In year 2000 India received is US $ billion as remittances from international migrants.3. Punjab, Kerala and Tamil Nadu receive very significant amount form their international migrants.4. The remittances sent by the internal migrants play very important role in the growth of economy of the source area.5. Unregulated migration to the metropolitan cities of India has caused overcrowding.6. It leads development of slums in industrially developed states.Social consequences of migration:1. Migrants act as agent of social change. The new ideas get diffused from urban to rural areas through them.2. It leads to intermixing of people from diverse cultures.3. It helps in the evaluation of composite culture and widens up the mental horizon of the people.4. It creates social vacuum and sense of dejection among. Individuals which motivate people to tall in the trap of and social activities.Ques 19: 'Fragmentation of land holdings' and 'degradation of cultivable land' are the serious problems of India agriculture. Suggest and explain measures to overcome these problems.Ans: Fragmentation, of land holdings and degradation of cultivable land are serious problems of Indian agriculture.Measures for fragmentation of land holding:1. Consolidation of land holdings.2. Strict implementation of land reform.Measures to overcome degradation of cultivable:1. Check water logging.2. Use of organic manure.3. Cultivation or leguminous crops.4. Rotation of crops.Ques 20: Which is the apex body in India to improve the quality of National Highways? Examine the significance of National Highways.Ans: The apex body in India to improve the quality of National Highways is National Highway Authority of India (NHAI).Significance of National Highways:1. National Highways passe across the country connecting major state capitals, major cities, important ports and railway junctions.2. National highways are meant for interstate transport and for the movement of defence men and materials in strategic areas.3. The National Highways constitute approximately 2% of total road length carries 40% of the total road traffic.4. They are 4-6 lane and make journey fast and easy.Ques 21: Identify the five Geographical features shown on the political outline map of the World as A, B, C, D and E and write their correct names on the lines marked near them with the help of following information:

(A) The Country with largest area in Africa (B) An area of dairy farming (C) A major sea port (D) An international airport (E) A mega cityAns: 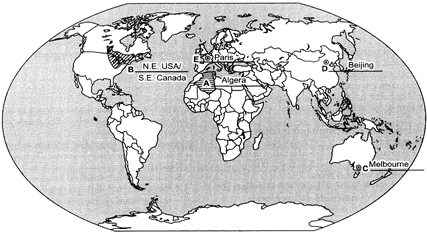 Ques 22: Locate and label the following features with appropriate symbols on the given outline political map (on page 15) of India: (I) The state with lowest density of population. (II) The state with highest percentage of rural population. (III) A major copper mining area in Southern Rajasthan. (IV)The integrated iron and steel plant located in Chhattisgarh. (V) The international airport located in Assam.Ans: