Question 1. Why is sex ration favourable to women in many European countries ? Explain any one reason. [1] Answer: European countries have more females than males because a very large number of men have migrated out to other countries. Women enjoy better status than men in these countries.

OR
Two characteristics of the Rectangular Pattern of rural settlements in the world :

Question 4. Write the meaning of ‘medical tourism’. [1]
Answer: When people travel from one country to another in order to receive better medical, dental and surgical care; or in other words, when medical treatment is combined with international tourism, it is called medical tourism.

OR
Two methods which can be adopted for conservation of water in India are :

Question 8. “Human beings are direcdy dependent on nature for resources which sustain them.” Examine the statement.
OR
“The knowledge about nature is Extremely important to develop technology.” txamine the statement. [3]
Answer: There is direct dependence of human beings on nature for resources which sustain them. The physical environment for such societies becomes the “Mother Nature”. Nature is powerful source, worshipped, revered and conserved. Human beings ‘ are directly dependent on nature for resources which sustain them. They create possibilities with the resources obtained from the environment. The human actvities create cultural landscape. The imprints of human activities are created everywhere; health resorts on highlands, huge urban sprawls, fields, orchards and pastures in plains and rolling hills, ports on the coasts, oceanic routes on the oceanic surface and satellites in the space. Nature provides opportunities and human beings make use of these and slowly nature gets humanized and starts bearing the imprints of human endeavour.
OR
Human beings interact with their physical environment with the help of technology. It is not important what human beings produce and create but it is extremely important ‘with the help of what tools and techniques do they produce and create’. Technology indicates the level of cultural development of society. Human beings were able to develop technology after they developed better understanding of natural laws.

Question 9. Study the following table and answer the questions that follows: 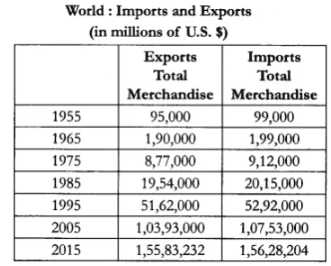 (9.1) Which aspect of trade has shown rapid growth ?
(9.2) Has the total volume of trade increased or decreased ?
(9.3) Why does import take place ? Write any two reasons.
Answer: (9.1) Import aspect has shown major growth.
(9.2) The total volume of trade has increased over the years.
(9.3) Import are important for the development and growth of national economics because not all countries have the resources and skills required to produce certain goods and services.

Question 10. “The period from 1901 to 1921 is referred to as a stagment phase of India’s population growth.” Substantiate the statement. [3]
Answer: The period from 1901-1921 is referred to as a period of stagnant growth of India’s population, since in this period, growth rate was very low, even recording a negative growth rate during 1911-1921. Both the birth rate and death rate were high keeping the rate of increase in population low.
Poor health and medical services, illiteracy of people at large and inefficient distribution system of food and other basic necessities were largely responsible for a high birth and death rates in this period.

Question 11. How does intermixing of people from diverse cultures due to migration have positive values ? Explain. [3]
Answer: Migration leads to intermixing of people from diverse cultures. It has positive contribution such as evolution of composite culture and breaking through the narrow considerations and widens up the mental horizon of the people at large. It helps to promote national integration, loosens die rigidity in terms of social barriers like caste and religion. Intermixing of people helps in decreasing the social gaps formed between different castes and classes.
Question 12. Describe the development of medieval towns in India during the Mughal period. [3]
OR
Describe the development of modern towns in India during the British period.
Answer: The Mughal period observed the development of many cities and towns. About 100 of existing towns have their roots in medieval period. These were well connected with roadways and majorly developed as capitals or headquarters of principalities and kingdoms. There are fort towns. Agra was then the capital and was well connected ‘ with the rest of the country. The other important towns included Delhi, Hyderabad, Jaipur, Lucknow and Nagpur. These towns grew bigger and occupied great significance in terms of administration, trade and manufacturing.
OR
The British and other Europeans developed a number of towns in India. They first developed some trading ports such as Mumbai, Chennai, Kolkata, Surat, Daman, Goa, Pondicherry, etc. for the ease of trade and commerce. Gradually they established their administrative centres, hill towns as summer resorts etc. Towns based on modern industries also evolved after 1850. For eg., a large number of towns were developed as administrative headquarters, eg., Chandigarh, Bhubaneswar, Gandhinagar, Dispur, etc. and as industial centres such as Durgapur, Bhilai, Sindri, Barauni, etc. Some old towns also developed as satellite towns around metropolitan cities such as Ghaziabad, Rohtak, Gurgaon around Delhi. With increasing investment in rural areas, a large number of medium and small towns have developed all over the country.

Question 13. Study the given map carefully and answer the questions that follow:
(13.1) Mention the source of origin of this canal.
(13.2) Why is the area to. the east of the canal under lift irrigation ?
(13.3) Explain the economic significance of this canal for the command area. [4] 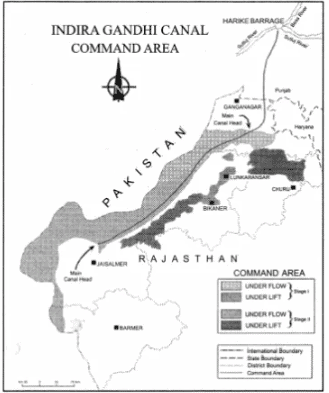 Answer:
(13.1) Canal originates at Harike Barrage/Confluence of Satluj and Beas.
(13.2) Areas of the East of canal under lift irrigation because water is lifted up to make it to flow against the slope of the land/high land area.
(13.3) Canal irrigation has led to increase in cultivated area and intensity of cropping. Traditional crops sown here like Gram and Bajra have been replaced by Wheat, Cotton, Groundnut and Rice. It led to increase in agriculture and productive livestock.
Question 14. Explain the economic and cultural factors that influence the distribution of population in the world. [3 + 2 = 5]
Answer: Economic Factors :
1. Minerals : Areas rich in mineral deposits result in better employment opportunities and hence have higher population concentration. Industrial towns are found to develop near mining centres. They favour high density of population. For eg., Durgapur and Jamshedpur.
2. Urbanisation : Urban settlements offer better standard of living, medical facilities, well developed transport networks and better employment opportunities etc. These facilities encourage rural to urban migration resulting in high density of population in the megacities of the world.
3. Industrialisation: Industrial belts offer scope of various types of employment opportunities and attract large scale migration. This includes factory workers, bank employers, shopkeepers etc. Cultural Factors : Places having religious and cultural significance attract more people e.g., Varanasi, Ayodhya, Mathura. In some countries, favourable government policies and incentives peaceful atmosphere and other facilities result in high population densities.

Question 15. Explain with examples how commercial livestock rearing has become a specialised activity in the world. [1 × 5 = 5]
Answer: It is a modern highly commercial activity where livestock is reared on permanent ranches. Commercial livestock rearing is more organised and capital intensive. This is specialized activity in which only one type of animal is reared. Grasslands of USA, Australia, New Zealand. The following characteristics also make it a highly specialised activity., 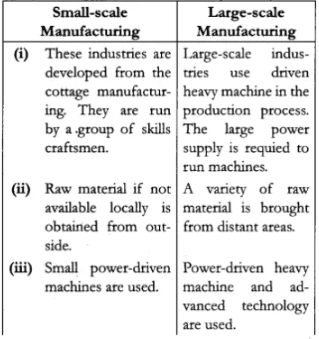 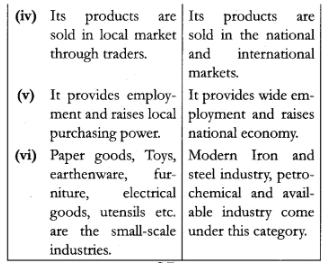 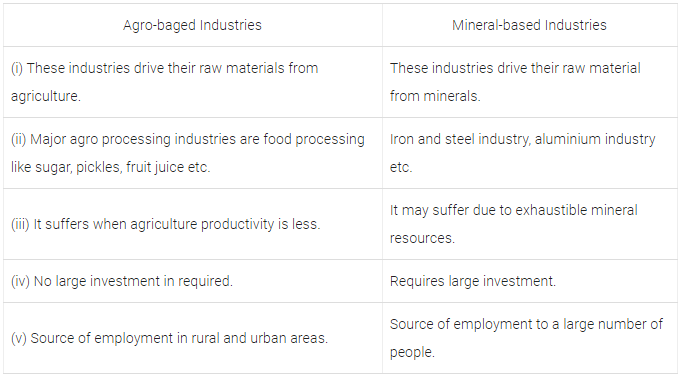 OR
Trans-Canadian railway line is considered as the economic artery of Canada by the following reasons :

Question 19. “The non-conventional sources of energy in India Will provide more sustained and environment friendly energy.” Examine the statement. [5]
OR
“Conversion of mineral resources is essential for the development of India.” Examine the statement.
Answer: Non conventional energy sources are the only sustainable sources. They are renewable resources like Solar, Wind, Hydro-Geothermal and Biomass. These energy resources are more equitably distributed. These are environmental friendly and cost-effective in the long run. India has huge prospect in the production of such resources that will provide sustained and environmental friendly energy in the future :

OR
Conservation of mineral resources is essential for the development of India.

Question 20. “Indian railways network is one of the longest networks of the world and has contributed a lot to the growth of the economy.” Support the statement. [3 + 2 = 5]
Answer: The Indian railway network is spread over 63,221 km making it one of the longest railway networks of the world. It plays a great role in the economic development of the country in the following way :

Question 21. On the given political outline map of the World, five geographical features have been marked as A, B, C, D and E. Identify them with the help of the following information and write their correct names on the lines drawn near them :
(A) An area of nomadic herding
(B) An industrial region
(C) An international airport
(D) A mega city
(E) The terminal station of ‘Trans-Continental Railway’. [1 × 5 = 5] 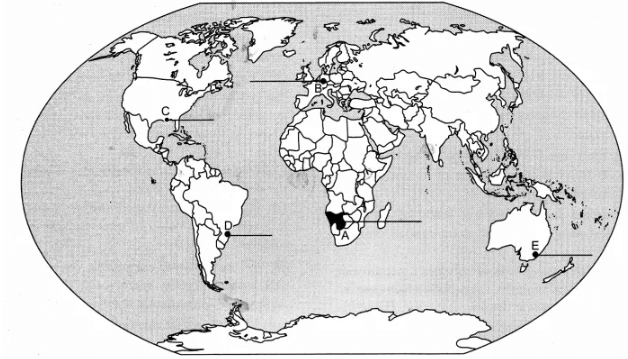 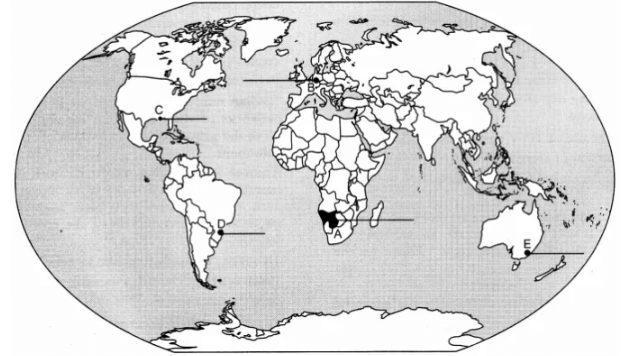 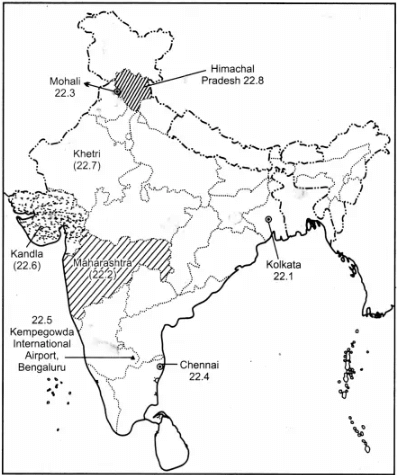