Ques 1: Identify any two occupations to be performed by Kshyatriyas as per Varna Order.Ans: The two occupations to be performed by the Kshyatriyas were to engage in warfare, protect people and administer justice.Ques 2: Examine the outcome of the battle of Rakshasi- Tangadi (Talikota).Ans: The battle was fought in 1565. Rama Raya, the Chief Minister of Vijayanagar led the army into the battle of Rakshsi - Tangadi (Talikota) where his forces were routed by combined forces of Bijapur, Ahmednagar and Golconda. These forces sacked the city of Vijayanagar.Ques 3: What do you know about the authors and the period when Mahabharata was compiled? Explain. Ans: There are so many views about the author of Mahabharata. Following views have been put forward regarding the authorship of Mahabharata: It is believed that the original story was written by the Chariotior- bards known as Sutas. They originally accompanied kshtriya warriors to the battle field and composed poems celebrating their victories and other achievements. It is also believed that the beginning text of Mahabharata was orally circulated. Scholors and priests carried it from one generation to another. From the 5 century BCE, the Brahamanas took over the story and started writing. This was the time when Kurus and Panchals were gradually becoming Kingdoms.This story of Mahabharata also revolved around them. Some parts of the story reflect that old social values were replaced by the new ones. C.200 BCE and 200CE is another phase in the composition of the Mahabharata. During this period worship of Vishnu was gaining ground. Krishna came to be identified as Vishnu. Large didactic sections resembling Manusmriti were added during the period between C 200 and 400 CE. These interpretations made the Mahabharata an epic consisting of 100,000 verses. This enormous composition is traditionally attributed to a sage named Vyasa.Ques 4: 'India had a unique system of communication during the fourteenth century.' Examine the statement of Ibn Batuta.
Ans: Ibn Batuta arrived India in the 14th century. He was much impressed by the Postal System of India. Two kinds of postal system were prevalent in the society. These two systems, the horse-post called the Uluq and foot-post called the Dawa. Uluq had their station at every four miles, while Dawa's station was at three miles. The foot system was much spread than the horse, system and -was prevalent in the entire sub-continent. It is because of this efficient postal system the rulers were able to keep a strict watch over the vast empire. The ruler used to get all the information about all the events in the minimum possible time. It is evident from the fact that he took nearly 40 days to travel from Sindh to Delhi - Whereas the spies of the king were able to send their news reports in just five days. This efficient system of post also proved beneficial for the traders which enabled them to dispatch their goods in a short period of time.Ques 5: 'The granting of titles to the men of merit was an important aspect of Mughal polity.' Explain.Ans: Grand tides were adopted by the Mughal emperors at the time of coronation or after a victory over an enemy. High sounding and rhythmic, they created an atmosphere of awe in the audience when announced by ushers (naqib). The granting of titles to men of merit was an important aspect of Mughal polity. A man's ascent in the court hierarchy could be traced through the tides he held. The title Asaf Khan for one of the highest ministers originated with Asaf, the legendary minister of the prophet king Suleiman (Solomon). The title Mirza Raja was accorded by Aurangajeb to his two highest ranking nobles, Jai Singh and Jaswant Singh. Titles could be earned or paid for. Mir Khan offered Rs one lakh to Aurangazeb for the letter Alif, that is A, to be added to his name to make it Amir Khan.Ques 6: Examine the land revenue system that was introduced in Bombay Deccan. How did the peasants fall into the debt-trap of the moneylendersExplain.Or'Rumours and prosphesies played a part in moving the people into action during the revolt of 1857.' Examine the statement with rumours and reasons for its belief.Ans: Land Revenue Systems in British India: Three major systems of land revenue collection existed in India. They were - Zaminidari, Ryotwari and Mahalwari. 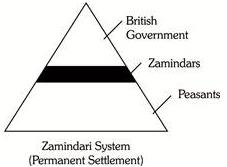 After the land revenue system introduced in Bombay Deccan, the peasants fell into the debt trap or moneylenders i.e., Zamindars.The money lenders were insensitive to the plight of small peasants. The moneylenders were powerful and were violating the customary norms that regulated the relationship between moneylenders and small peasants.
The ryots and peasants often complained of moneylenders manipulating laws and forging accounts. In 1859, the British passed a limitation law that stated that the loan bond validity shall be 3 years. This law was meant to check the accumulation of interest over time - However, moneylenders turned the law around, forcing borrowers to sign the bond every three years. When new bond was signed, the unpaid accumulated interest amount was added to principal and hence principal amount increased. The moneylenders used various methods like; they refused to give receipts when loan was repaid, entered fictitious figures in loan bonds, acquired the peasant's harvest at a lower price, and ultimately took over peasant's property.The peasants were made to sign or in case of uneducated peasants, took thumb impression on documents, but peasants did not know what they were actually signing on and the clauses that the moneylenders inserted in the bonds. They feared the written words, but had no choice because they needed loans to survive. This way the peasants faced injustice in the hands of moneylenders and under debt-trap they lost all their lands.