Ans: (i) The European residencies were built in the midst of compounds so that they can get the space for parks, and the rice-fields frequently wind in and out between these in almost rural fashion.(ii) The black towns were thickly populated, with less hygienic living conditions and with no planning.(iii) Gradual urbanisation of Madras (Chennai) indicated the development of the city. With the defeat of the French in 1761, Madras (Chennai) became more secure and began to grow into an important commercial town. It developed by incorporating innumerable surrounding villages and by creating opportunities and spaces for a variety of communities.Ques 17: (i) On the given political outline map of India, locate and label the following appropriately:(a) Masulipatanam-a territory under British control during 1857.(b) Goa-a territory under the Mughals.(ii) On the same map of India, three places which are major Buddhist sites have been marked as A, B and C. Identify them and write their correct names on the lines drawn near them. 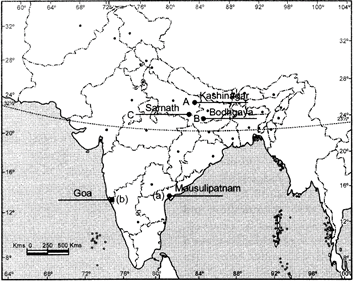