Ans: (i) Operation flood – 1970(ii) Bombay plan – 1944(iii) First five-year plan – 1951(iv) Third five year Plan – 1961Q.22. How far is it correct to say that after 1990 India’s foreign policy has shifted to a Pro-U.S. strategy? Explain. Ans: In the post-Cold War era, India and the US are sharing very ‘harmonious relations’ — based on mutual cooperation and understanding. During the Cold War years, India’s closest friendship was with the Soviet Union. But after the collapse of the Soviet Union, India suddenly found itself friendless in an increasingly hostile international environment. During these years India introduced New Economic Policy to liberalize its economy and integrate it with the global economy. The liberal economic policy and India’s impressive economic growth rate in recent years have made the country an attractive economic partner for a number of countries including the US.Technological dimension Role of Indo-American DiasporaThese two factors are so interrelated that it gives the interdependency to Indo-US relations like:

Q.23. List any four steps suggested by the member-states of the UN in 2005 in order to make the United Nations more relevant.Ans: With the completion of 60 years of its existence the members of the UN met in September 2005 to review the situation and suggested some significant steps to make it more relevant in the changing context.

Q.24. Explain in brief any four components of India’s security strategy. Ans: I. Strengthening military capabilities: India tried to strengthen its military capabilities because it has been involved in conflicts with its neighbors and has full-fledged wars with Pakistan in 1947-48,1965,1971 and 1999 and with China in 1962. Since it is surrounded by nuclear-armed countries in the south Asian region India’s decision to conduct nuclear tests in 1998 was justified in terms of safeguarding national security.II. Strengthening international Norms and institutions: The second area of India’s security strategy is to strengthen international norms and institutions to protect its Security interests.(a) India’s first Prime Minister Jawaharlal Nehru supported the cause of Asian solidarity, decolonization, disarmament, and the UN as a forum in which international conflicts could be settled.(b) It argued for an equitable New International Economic Order (NIEO). Most importantly, it used “non-alignment” to help carve out an area of peace outside the bloc politics of the two superpowers.(c) India also joined Kyoto Protocol to check Global warming. Besides, the follow-up to cooperative security India sends its troops abroad on UN peacekeeping missions.III. Strengthening internal security: Apart from outside-security strategy, the Indian security strategy is also geared towards meeting security challenges within the country. In order to accommodate several militants groups from Nagaland, Mizoram, Punjab, and Kashmir, among others, India has tried to preserve national unity by adopting a democratic political system that allows different communities and groups of people to freely articulate their grievances and share political power.IV. Developing India’s economy: In order to uplift its citizens out of poverty, misery, and huge economic inequality, India strategically planned to develop its economy. The attempt has not quite succeeded, we are still very poor and an unequal country. Yet democratic politics allows space for articulating the voice of the poor and the deprived citizens. Thus, in our country (India) democracy is not just a political ideal, but it is also a way to provide greater security. However, the above discussion justifies that India has been giving priority to both “Traditional and Non-traditional security.”Q.25. What is meant by ‘Global Commons’. Suggest any two steps for the protection of ‘Global Commons’. Ans: The areas or regions of the world which are located outside the sovereign jurisdiction of any one state and require common governance by the International Community are known as Global Commons. All these conferences and Summits, therefore, raised the issue to the political arena and developed some political questions like if the various governments take steps to check environmental degradation, these issues will have political consequences in that sense and therefore, they have to become a part of world politics.Q.26. Highlight any four issues of tension between India and Bangladesh. Ans: The governments of India and Bangladesh have had “differences over several issues” like

Areas of Cooperation:Despite their difference, India and Bangladesh do cooperate on many issues like:

Ans: (a) Ch- Charan Singh – Farmers(b) P.C. Mahalanobis – Industrialisation(c) Bihar Famine-Zoning(d) Varghese Kurien-Milk cooperativesQ.28. What was the Tibet issue? How did it cause tension between India and China? Explain. Ans: ‘Tibet’ the plateau region of Central Asia is one of the major issues that for a long historical period caused tension between India and China. 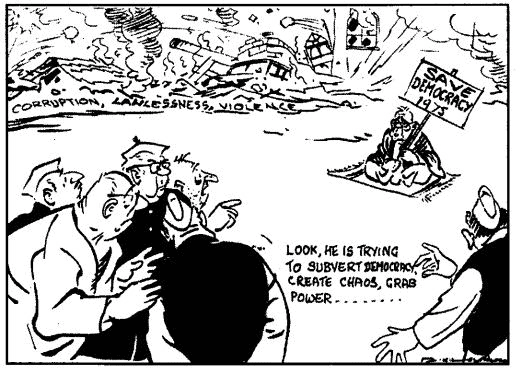 Study the cartoon given above carefully and answer the following questions:(i) Identify and name the person holding in his hand, the placard ‘Save Democracy’.(ii) In your opinion, the group of five persons belongs to which political party?(iii) According to the group of five, what are the intentions of the person sitting on Dhar ia’?(iv) Which issues responsible for the downfall of democracy are highlighted in the cartoon?Ans: (i) The person holding in his hand the placard “Save Democracy” is Jayapraksh Narayan.(ii) The group of fire persons belongs to the Non-Congress group.(iii) The intentions of the persons sitting on the Dharna are to launch a nationwide Satyagraha. They asked the army, the police, and government employees not to obey illegal and immoral orders.(iv) The declaration of Emergency of 1975 was the issue followed by mass protests. The downfall of democracy is highlighted in the cartoon.Note: For Blind Candidates only, in lieu of Question No. 29.(a) Who accepted the students’ request to lead the Bihar Movement? Which condition did he lay before giving his consent to lead?(b) Mention any two main objectives of his movement.Q.30. When and why did a long phase of coalition politics begin in India? Ans: As the decade of the eighties came to a close, the country witnessed five main issues that were to make a long-lasting impact on our politics.(i) End of the Congress System(ii) Mandal Issue(iii) New economic reforms(iv) Babri Masjid Issue(v) Assassination of Rajiv GandhiElections in 1989 led to the defeat of the Congress party but did not result in a majority for any other party. Thus, began an era of a “Multi-party system”. What happened after 1989 was the emergence of several parties in such a way that one or two parties did not get most of the votes or seats. This also meant that no single party secured a majority of seats in any Lok Sabha election held since 1989. This development led to an era of coalition governments at the center in which regional parties played a crucial role in forming a ruling alliance. The nineties also saw the emergence of powerful parties and movements that represented the Dalit and backward castes. Many of these parties represented powerful regional assertions as well. Thus, with the election of 1989, a long phase of coalition parties began in India. Since then there have been nine governments at the center, all of which have either been coalition governments or minority governments supported by other parties, which did not join the government. In this new phase, any government could be formed only with the participation or support of many regional parties.Q.31. How did the ‘New International Economic Order’ come into being? Which reforms were proposed by UNCTAD in its report in 1972?

Explain any six factors which helped the Soviet Union in becoming a Super-Power after the Second World WarAns: The idea of a New International Economic Order (NIEO) originated for the sustainable economic development of the least developed countries of NAM. The United Nations Conference on Trade and Development (UNCTAD) brought out a report in 1972 entitled “Towards a New Trade Policy for Development”.The report proposed a reform of the global trading system to

Six factors that helped the Soviet Union in becoming a superpower after the second world war:

Q.32. Explain any six factors that forced Gorbachev to initiate reforms in the Soviet Union.

‘Although India has maintained good relations with all the post-Communist countries, yet the strongest relations are still between India and Russia.’ Explain the statement with any three suitable arguments.Ans: Mikhail Gorbachev, who had become General Secretary of the state Communist Party of the Soviet Union in 1985, sought to reform this system. Hence, the following factors forced Gorbachev to initiate the reforms in the USSR.

Indo-Russian relations are embedded in a history of trust and common interests and are matched by popular perceptions.

Q.33. Evaluate any three factors that helped Congress to continue to dominate the Indian political scene for almost three decades after independence.

What was Green Revolution? Mention its any two positive and any two negative consequences.Ans:

The Green Revolution is a package of a new strategy of agricultural practices which resulted in increased yields of crops, especially foodgrains. The increase in production is a result of high-yielding varieties of seeds, fertilizers, and scientific irrigation.

The Green Revolution had two positive effects such as:

Q.34. Explain any six factors which led to the popularity of Indira Gandhi’s government in the early 1970s.

‘The 1977 elections for the first time saw the opposition coming to power at the center.’ Examine any six reasons for this change.Ans: In the early 1970s the government of Indira Gandhi gained popularity due to various factors such as:

The result of the 1977 election took everyone by surprise. For the first time since independence, the Congress party was defeated and the opposition came into power at the center.

Q.35. How have popular movements contributed to the expansion of democracy rather than causing disruption? In the given political outline map of India, six states have been labeled as (A), (B), (C),(D),(E), and (F). Keeping in mind, the Lok Sabha Election Results of 2004 and with the help of the information provided below, identify these states. Write their correct names in your answer book in the following tabular form:

Conclusion:Keeping in view both negative and positive arguments, while concluding we can sum up that movements are not only about collective assertions or only about rallies or protests. They involve a gradual process of coming together of people with similar problems, similar demands, and similar expectations. ‘ Movements are also about making people aware of their rights and the expectations that they can have from democratic institutions. Social movements in India have been involved in these educative tasks for a long time and have thus contributed to the expansion of democracy rather than causing disruptions. The struggle for the right to information is a case in point.

Note: the following questions are for Blind Candidates only in lieu of Q. No. 35:(a) Write the full forms of the coalitions (i) UPA and (ii) NDA(b) Which coalition came to power in 2004? Name any two major supporting parties.(c) What was the consensus amongst most parties on the issue of reservation of seats for the backward classes?