Ques 1: State any one special feature of Indo-Russian friendship.Ans: India's relation with Russia is an important aspect. Indo-Russian relations are embedded in a history of trust and common    interests and are matched by popular perceptions.For example: India's silver screen heroes Raj Kapoor and Amitabh Bachchan are household names in Russia.Ques 2: Which one of the following was a part of its Global war on terrorism by the U.S?(a) 'Operation Desert Storm'(b) Computer War(c) 'Operation Enduring Freedom'(d) Videogame War.Ans: The Global war on terrorism by the US is known as Operation Enduring Freedom?Ques 3: Give any one example to show that events taking place in one part of the world could have an impact on another part of the world.Ans: The best example of affecting other countries when the event takes at one place is outpouring the help from all parts of the world for victims of major earthquake/Asian tsunami. This is a sign of emergence of a global society.Ques 4: What has been the ideology of left parties in India?Ans: The communist group emerged in different parts of India taking inspiration from the Bolshevik revolution in Russia and advocating socialism as a solution to problems affecting the country.Ques 5: How far is the demand for reservation beyond SCs, STs and OBCs justified?Ans: At present in India, approximately 50% seats are reserved for SCs, STs and OBCs. The seat reservation and quota for people in all institutions, govt. offices were given as caste discrimination due to illiteracy and backwardness. Today demand for reservation by various sections of society is unjustified.Ques 6: Starting in the 1960s, the two super powers signed which two significant agreements to control arms?Ans: The two super powers, USA and USSR signed the following two significant agreements:(i) LTBT (Limited Test Ban Treaty) - In 1963 Treaty Banning Nuclear Weapon Tests in the Atmosphere, in Outer Space and Under Water, which prohibited all test detonations of nuclear weapons except for those conducted underground.(ii) NPT - Non-Proliferation Treaty or NPT, is an international treaty whose objective is to prevent the spread of nuclear weapons and weapons technology, to promote cooperation in the peaceful uses of nuclear energy. The further goal is to achieve nuclear disarmament and general and complete disarmament.Ques 7: Assess the commonly agreed upon two goals visualized by the Indians during the national movement which have been fulfilled after independence.Ans: Two goals visualised by Indians were:(i) India to be run by Democratic Government. Even citizen is independent and can choose its leader.(ii) The Government to be run by all, including poor people and socially disadvantage groups.Ques 8: Match the following leaders in List-A with the suitable statements in List-B:List - A(a) Lal Bahadur Shastri(b) C. Natarajan Annadurai(c) Charu Maiumdar(d) Jagjiwan RamList - B(i) Founder of Communist Party of India (Marxist - Leninst)(ii) Founder of D.M.K.(iii) A Member of Parliament from 1952 till his death in 1986.(iv) Coined the famous slogan ?Jai Jawan - Jai Kisan? 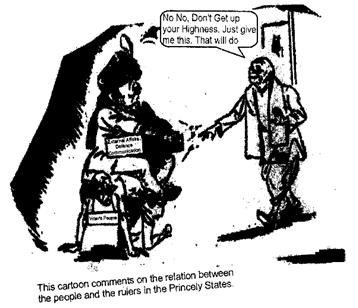