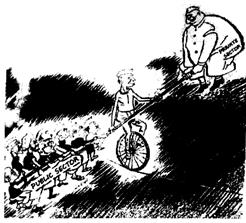 Ques 25: Highlight the acts of dissent and resistance of the Emergency imposed in 1975. In your opinion, how did these acts affect the public opinion?
Or
Analyse the issue Indira vs the Syndicated what type of challenges did the issue pose before Indira
Gandhi?
Ans: On 12th June, 1975 Justice Jagmohan Lal Sinha of Allahabad High Court declared Indira Gandhi Lok Sabha election as invalid. Opposition demanded resignation from Indira Gandhi. There were many rallies and sabhas but in response government declared a state of emergency on 25th June, 1975.
(i) It invoked Article 352, under the provision of this Article government could declare a state of emergency on grounds of external threat or internal disturbance and some special powers were given to the government.
(ii) Federal distribution of powers remains practically suspended and the powers are concentrated in the hands of Union government
(iii) Government also has powers to curtail or restrict all or any of fundamental rights.
(iv) Special powers are granted to the government in which normal democratic politics cannot function.
Effects of these Acts on public:
(i) On the midnight of 25th June, 1975 me electricity to all the major newspaper offices was disconnected.
(ii) In the cities leaders and workers of opposition parties were arrested.
(iii) Strikes were banned.
Or
The factional rivalry between the Syndicate and Indira Gandhi came in the public in 1969.
The challenges faced by Indira Gandhi were:
(i) After the death of Zakir Hussain, for the post of President, Syndicate managed to nominate their longtime opponent and N. Sanjeeva Reddy as candidate for the presidential election.
(ii) She had a strong opposition for electoral contest (1971).
(iii) Lok Sabha elections of 1971, were as dramatic as was the decision to hold these elections. The Congress (R) CPI alliance won more seats.
(iv) Indira Gandhi's party could not get less than one fourth of the votes 16 seats.
(v) She focussed on the growth of the public sector, imposition of ceiling on rural land holdings and urban property, removal of disparities in income and opportunity and abolition of Privy Purse.

Ques 26: Describe any three areas of tension which are yet to be solved to retain unity in diversity in India.
Or
Describe any three elements of growing consensus among most of the political parties of India after 1989.
Ans: India adopted a democratic approach to the question of diversity. It allows the political expressions of regional aspirations and does not look upon them as anti - national. But there are problems in unity in diversity.
(i) Problems in Kashmir valley have not been resolved until now. Some Kashmiris want to be a part of India and some Muslims want to be a part of Pakistan.
(ii) In some parts of North-East there was no consensus about being a part of India.
(iii) Nagaland and them Mizoram witnessed strong movements demanding separation from India. In the south some groups from the Dravid movement briefly toyed with the idea of a separate country.
Or
After 1989 three elements or growing consensus among most of the political parties are:
(i) The defeat of the Congress party marked me end of Congress era of mutli - party system has begun so, Alliance Politics was seen. In different elections coalition government was made after 1989. A long phase of coalition politics began.
(ii) The nineties also saw the emergence of powerful parties and movements that represented the Dalit and backward classes. Many of these parties represented powerful regional assertion as well. First coalition government came to power in 1996. BJP did not support it but it was supported by the Congress.
(iii) Many other parties at the national level were formed viz., Janta party, Bhartiya Kranti Dal and Sanyukta Socialist Party. Some parties had a powerful rural base among sections of OBC. In election it has become necessary to reserves quota for OBC.